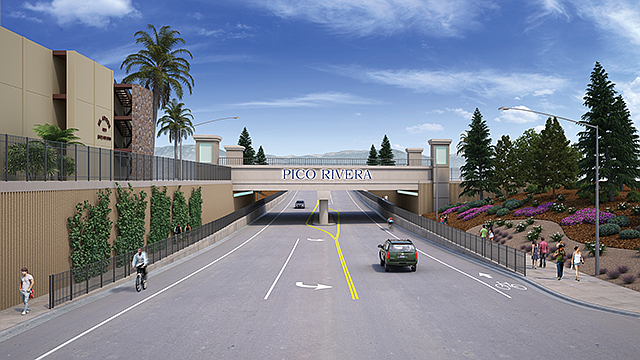 The $105 million grade separation project in Pico Rivera will allow freight trains and everyday vehicular traffic to avoid each other as much as possible.

The larger infrastructure project consists of a series of 19 individual grade separation projects and another 20 grade crossing improvements scattered across the San Gabriel Valley. It’s part of the effort to speed ever-growing volumes of freight traffic from the twin ports of Los Angeles and Long Beach to the Inland Empire and points east with a minimal amount of disruption to local residential and business communities. It was intended as a follow-on to the 20-mile, $2.4 billion Alameda Corridor project that opened in 2002 to connect the ports to rail yards east of downtown.

Riverside Construction Co. Inc. was named the prime contractor for the Pico Rivera portion of the project in December by the Alameda Corridor-East Construction Authority, whose members are appointed by 30 local governmental bodies serving the San Gabriel Valley. Earlier this year, the Riverside-based prime contractor submitted a list of 11 subcontractors to the authority; four are headquartered in Los Angeles County: Granstrom Masonry Inc., of Torrance; J.V. Land Clearing Co. Inc., of San Dimas (land clearing and demolition); and Crown Fence Co. and J.A. Placek Construction Co., (railroad construction), both of Santa Fe Springs.

The Durfee Avenue undercrossing is the 17th grade separation project to break ground. Eleven have already been completed, including a 1.4-mile long trench in San Gabriel that wrapped up in 2017. Three others are now under construction in the City of Industry, and two more are in final design stages — one in Montebello and another in City of Industry.

From tire factory to college campus

The South Gate Educational Center site covers about 18.5 acres of the former 40-acre Firestone tire factory complex where workers turned out millions of tires from 1928 until it closed in 1980. The site remained vacant until 2005 when a high school opened on a portion of the parcel.

When completed in about three years, the East Los Angeles College satellite campus will consist of a three-story, 105,000-square-foot, LEED-certified building that will house a library, 28 classrooms, lab space, faculty offices and a large lecture hall.

Downtown-based water infrastructure company Cadiz Inc. is looking to add Maria Echaveste and Carolyn Webb de Macias to its board.

The announcement came last week ahead of a state deadline requiring publicly traded companies to have at least one female board member by January 2020. Cadiz’s current board members are all male.

The company has submitted Echaveste and Webb de Macias’ names for approval by shareholders at the company’s annual meeting next month.

The board candidates would also bring considerable federal government experience to the company. Cadiz has spent decades seeking federal and state government approvals for its plan to pump water from an aquifer it owns in the Mojave Desert and transport the water via pipeline to several water districts, primarily in Southern California.

Echaveste is best known for her role as deputy chief of staff to former President Bill Clinton. She is now chief executive of the Opportunity Institute, a nonprofit organization working to increase economic and social mobility in poor communities.

Webb de Macias was appointed by former President Barack Obama to serve in the federal Education Department. She is now board chair for the Partnership for Los Angeles Schools, a nonprofit that manages 18 public schools through an agreement with the Los Angeles Unified School District.