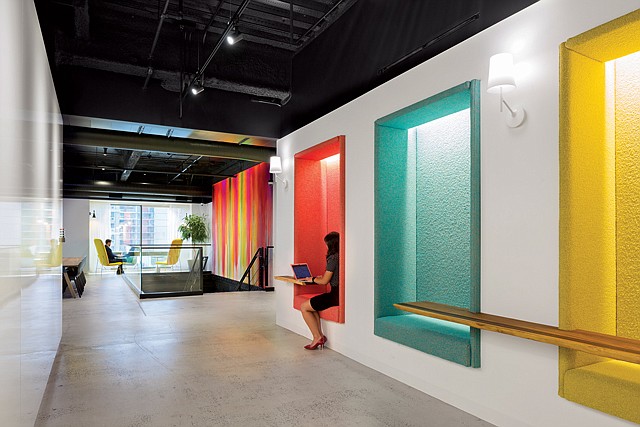 A few years ago, companies were clamoring to knock down cubicle walls and do away with corner offices as a way to encourage collaboration while also saving money on rent.

But the so-called “open concept” trend appears to be getting some pushback.

Many workers in open offices say the approach is distracting. “I could have written faster and sent in more work if I had a space that was relatively quiet,” said Eb Richardson, a television and advertising producer who previously worked in an open office. The noise level and constant presence of other people also made it difficult to take calls with clients, she said.

To restore structure to their workplaces, some Los Angeles companies are asking designers and architects to walk back the open concept trend.

Phone booths, tinted glass, noise-absorbing furniture and partition walls are restoring a level of solitude to the workplace while retaining some elements of openness.

All-in to open up

Architects and brokers say the open concept office gained popularity after the Great Recession as companies ramped up their businesses but wanted to remain cautious in their spending. Companies that needed 25,000 square feet with a traditional office plan, for example, could save money by squeezing the same operation into 15,000 to 18,000 square feet with open plans.

“You can pack a higher density of people into the square footage,” said Scott Hunter, a principal at Dallas-based architecture firm HKS Architects’ Los Angeles office.

But lately HKS is being called on to design more “off the beaten path, closed-door private spaces” employees can reserve, Hunter said. HKS is developing offices with small rooms for meetings and a range of other privacy options for Brentwood-based Capital Brands’ Wilshire Boulevard operation and for Kaiser Permanente Inc.’s Porter Ranch facility.

A 2018 Harvard Business School-funded study, “The Impact of the ‘Open’ Workspace on Human Collaboration,” found that face-to-face interaction actually decreased 70 percent when the walls came down.

One of Harding’s clients, a tech company he declined to name, opted for an open office concept roughly seven years ago. The company now wants more privacy, so it’s adding conference rooms and other separated areas. Other clients have added glass dividers and smaller rooms.

Harding’s clients are “trying to find the right balance between collaboration amongst employees and creating an environment that makes people want to stay at the office and the company,” he said.

Step into the phone booth

That conundrum is a boon for companies that manufacture phone booths, which have become a ubiquitous feature in many open concept offices because of how quickly they can be built, shipped and set up. Other methods of adding privacy require more construction time and workplace disruption.

“There need to be a lot more phone booths in the world than there currently are,” said Brian Chen, co-founder and chief executive of Room. “That’s why you find people in the hallways or in bathrooms or in closets taking phone calls.”

Since Room launched in May of last year, it has sold booths to more than 750 businesses, including El Segundo-based PeerStreet Inc.; Santa Monica co-working center Big and Tiny; and Santa Monica-headquartered Headspace Inc., which offers guided meditation, articles and videos. The booths cost about $3,500.

Sarah Friedman Casparian, director of project and development services at brokerage Cushman & Wakefield Inc., said that in order to reduce the cacophony of the open concept, some offices are revamping the cubicle. Acoustic treatments to cubicle partitions absorb sound, and opaque films on glass walls add needed seclusion, Casparian explained.

“For cubicles, it’s the idea of seated privacy,” Casparian said. With adjustable-height desks becoming more popular, some cubicles are now designed with panels that can be moved up and down, she said.

“It’s not that we’re seeing a swing back to private offices. We’re seeing a focus on making space functional.” Casparian added.

“You want elements of both the traditional office and the open office,” said Jay Finkelman, a professor at The Chicago School of Professional Psychology’s L.A. campus. “Giving people the ability to choose is likely to be most productive and space efficient. The next generation of open office will almost certainly include more private spaces.”

Convene, a New York-based flexible-office provider, has designed co-working office spaces that contain additional offices within. A company can rent a room with enough workspace for a handful of employees and one or three smaller offices that open onto the main room.

Convene, which operates two downtown locations in buildings owned by Brookfield Office Properties Inc., also makes sure its locations have plenty of small individual rooms for people who need to make phone calls. Some rooms feature tinted glass walls that are transparent but conceal television screens to anyone walking past.

Companies no longer want to be in a fully open environment, said Derek Damon, regional vice president of operations on the West Coast at Convene. “They want the connection of the people but want to have privacy.”