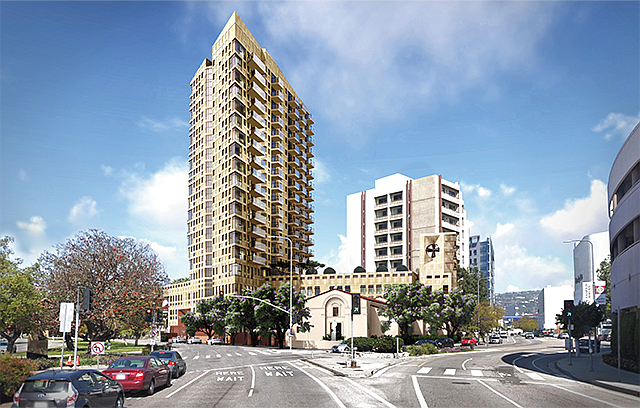 Church Tower: Our Lady of Mt. Lebanon filed plans to build a new apartment building at its Beverly Grove site.

In a March 28 announcement, the Beverly Grove church said the plans will also include revamping the cathedral and church buildings, which will add more than 31,000 square feet of offices, meeting rooms and an auditorium.

Bishop Abdallah Elias Zaidan said in a statement that the project will allow the church to serve the larger community. Of the proposed residential building’s 153 units, 17 will be affordable housing, the church said.

“It will generate revenue that will ensure the future of the Church, while also preserving its cultural history and at the same time provide new and much-needed housing for our neighborhood,” Zaidan said in a statement.

The church’s nearly 7,000-square-foot cathedral was built in 1937. It will be temporarily deconstructed and moved. It will be renovated to widen its aisles and add storage space.

Long Beach-based Harbor Associates is building up its real estate portfolio in Southern California, with plans to acquire more than $250 million in assets in the next year.

Harbor has roughly 1 million square feet of office space locally. Harbor Principal Paul Miszkowicz said the company is on the hunt for properties like the Encino office park — suburban locations in need of upgrades.

Harbor is planning to renovate the Encino acquisition with a new entry, electric-vehicle charging stations and other improvements.

“We’re typically value-add office investors,” Miszkowicz said. “A lot of what we end up buying has elements that require renovation.”

The group plans to hold on to assets for three to five years, giving it time to fix and stabilize the assets before selling them. Miszkowicz said the group was drawn to Encino because many of the tenants are professional services providers, who tend to be more reliable long-term tenants than businesses in other industries.

Rhode Island-based Citizens Financial Group Inc., the 13th largest bank in the United States with $160 billion in assets under management, has opened a commercial real estate office in El Segundo.

The office opened at the end of 2018 with two people but has grown and is looking to add more employees as the bank expands its West Coast presence to be closer to local real estate clients.

“We feel we can do much better being here with our boots on the ground,” said Kevin Boyle, senior vice president and western regional manager of commercial real estate at Citizens Bank.

Boyle was previously based at the bank’s Boston location. While there, he observed that the West Coast was drawing a lot of investment.

“We’d built up about a billion dollars in loans in the West,” Boyle said. “Management … liked the developers and the types of loans that we were doing.”

The bank will focus on $25 million to $100 million private acquisition, construction and permanent loans.

The group has made $200 million in loans for L.A. projects. Boyle expects that amount to double in the next six to 12 months.