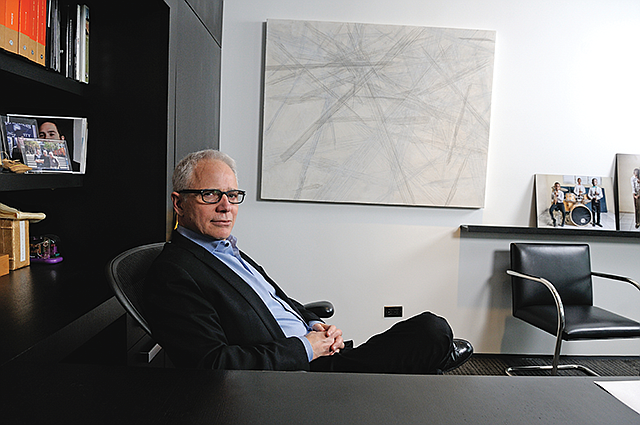 Lorne Buchman, president of ArtCenter College of Design in Pasadena, brought an unusual career history to the table when he took over as the institution’s fifth president in 2009.

Along with academic leadership positions at Saybrook University in Oakland and the Bay Area’s California College of the Arts, Buchman is a theater director and Shakespeare scholar, as well as author of the book “Still in Movement: Shakespeare on Screen.”

This background inspired students to mash up classical literature with cutting-edge design by using a laser printer to create a version of the famous skull of Yorick from Shakespeare’s “Hamlet” for their new prez. “It was, as you can imagine, a bit of an ambiguous gesture on their part that I arrived here and received a skull,” Buchman observed with a grin.

Both items get prominent display in Buchman’s office and serve as proof that his office door is always open to students and staff. No curtains or blinds cover the window walls that face campus designer Craig Ellwood’s 192-foot bridge over a man-made ravine. For Buchman, the bridge serves not only as a design landmark but a metaphor for a connection between formal design education and the real world.

“The president’s office is not at the top of a tower or inaccessible,” Buchman said. “I leave these windows absolutely open all the time, and it’s a kind of interesting transparency metaphor. I’m both inviting the world in and finding inspiration in the world.”

Perhaps due to his close relationship with Shakespeare, Buchman tends to find the metaphor in most things. He keeps baseball memorabilia in his office to salute his hometown team, the Toronto Blue Jays, but also because the game fascinates him. “The qualities of that game and its strategic architecture demand a certain level of both athletic skill and intelligence that is a nice metaphor for what I have to do,” he said.

The last metaphor of the day is the office’s 96-inch diameter Eames conference table that brings people together in a literal and figurative circle. “Having a round table is an architecture that lends itself so beautifully to the kinds of meetings I hope to have with my colleagues, or with students or faculty,” he said, adding slyly, “But I always say, I sit at the head of the round table.”