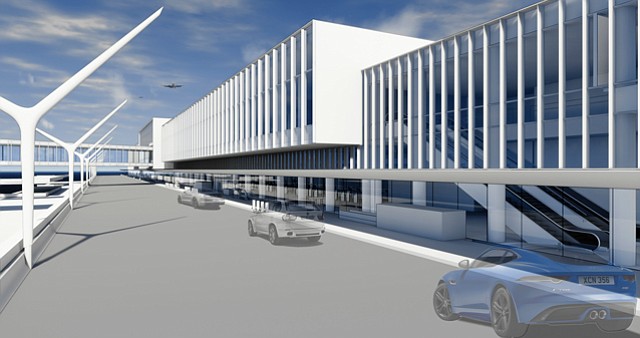 American Airlines Inc. is set to break ground next month on a $1.6 billion renovation of its two terminals at Los Angeles International Airport, one of the largest terminal rehabs ever undertaken by a carrier at a U.S. airport.

The Fort Worth, Texas-based airline, which occupies all of LAX terminal 4 and some of terminal 5, plans to connect the two terminals with a new structure that will also link to the airport’s planned people mover. Also on tap: New and larger combined passenger check-in and baggage-claim areas, and centralized security screening checkpoints.

Most of the project is expected to be completed within nine years – in advance of the opening of the 2028 Summer Olympic Games in Los Angeles – although some behind-the-scenes projects may extend a bit longer.

The terminal improvements planned by American Airlines are designed to bring the two aging terminals up to current standards and allow for future growth, according to Suzanne Boda, the carrier’s senior vice president for Los Angeles operation.

The airline confirmed that the $1.6 billion project is the largest terminal renovation ever carried out by the company.

American Airlines was the largest carrier at LAX last year with 16 million passengers, a 19 percent market share at the facility, according to Los Angeles World Airports, the city agency that runs LAX. The airline so far this year has retained its top rank at LAX: through July, American had nearly 9.5 million passengers, or an 18.5 percent market share.

Boda said the continued increase in passenger traffic and the physical space required for security since 9/11 combine to strain the current terminals’ capacity.

“Terminal 4, our main terminal, is one of the oldest terminals at LAX – it’s at least 50 years old and was put together in several pieces,” Boda said. “We’ve done some piecemeal modernizations over the years, but it has never been completely reconstructed. We need new and upgraded information technology infrastructure and new physical infrastructure. And we need to be ready for the growth in passenger traffic that we know is coming.”

American Airlines’ terminal renovation is part of the ongoing $14 billion overhaul of LAX – a mix of public-sector and private-sector projects – aimed at improving the traveling experience within the airport and easing access to the airport. Other projects include the building of a satellite international terminal on the airfield behind the Tom Bradley International Terminal, runway and other airfield improvements, renovations of almost every other terminal at the airport and construction of a people mover system and consolidated car rental facility.

American Airlines’ Terminal 4 first opened in 1961 and Terminal 5 in 1962 as part of the effort to turn LAX from a regional municipal airport into an international airport. Terminal 4 was expanded in 1983 and then underwent a more significant $400 million expansion in 2002, immediately after the Sept. 11 terrorist attacks. Terminal 5 was expanded and remodeled in the late 1980s.

Past renovations have helped keep terminal operations afloat, but the scale at which travels has increased at the airport demanded a more significant overhaul. According to LAWA, just 7.6 million passengers passed through LAX in 1962, a number dwarfed by the 84.5 million travelers the airport saw in 2017. American Airline’s terminal 4 saw 9.6 million passengers alone, surpassing the entire airport’s 1962 traveler figure.

Aviation consultant Michael Boyd, president of Denver-based Boyd Group International, said almost all airports and airlines are confronting challenges similar to LAX as markets try to catch with changes in the travel industry.

“The airline and air travel industries have changed dramatically in the last 20 years and terminals and airports have not kept up with the changes,” Boyd said. “With all the online ticketing options now, there’s much less space needed for ticketing, while much more space is needed for security screening.”

Boyd also said that the renovation at LAX also signals recent trend of terminals being renovated as part of a larger plan for whole facilities rather than on an ad-hoc basis.

“There’s been no comprehensive approach towards renovation – until now,” he said.

Boda said the lengthy timetable on American Airlines’ project is due to the need to keep the existing terminals operating with minimal disruptions for passengers and operations.

“It’s like doing heart surgery while the heart is still pumping,” she said.

When complete, Boda said the terminals will be able to handle both more flights and passengers than they do at present.