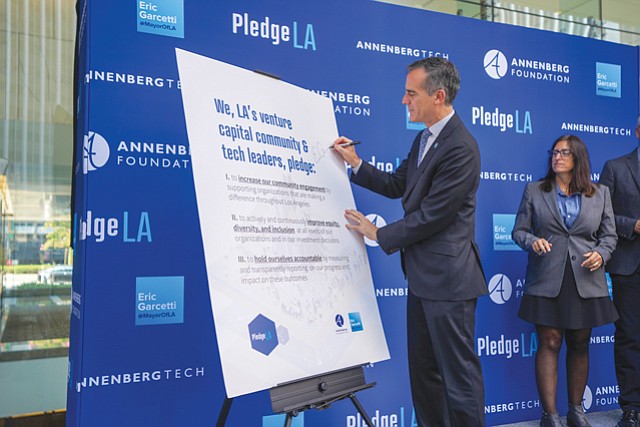 PledgeLA plans to change that by reporting company diversity data as well as eventually establishing an independent organization to continually monitor progress.

Annenberg, which has a $1.5 billion endowment, did not set aside any money to support the initiative, nor did the city or any of the companies involved. An Annenberg spokeswoman said the nonprofit was seeking out other possible funders and had initial contact with downtown-based Weingart Foundation about possible funding. The initiative does not have any dedicated staff. There is also no penalty for companies that are signed on to PledgeLA if they do not report employment diversity figures.

The pledge, however, promises to use venture capital and tech leadership to “generate explosive growth and innovation and increase opportunity and prosperity for all of L.A., including women, people of color, veterans, people with disabilities, and LGBTQ+ Angelenos.”

ServiceTitan has raised $161 million in five funding rounds to date, according to industry analyst Crunchbase Inc. ServiceTitan’s most recent Series C round, led by Boston-based Battery Ventures, netted it $62 million.

“Everything is going to continue to evolve, and those opportunities and challenges that are required to deliver on our mission are going to be far more complex and difficult,” ServiceTitan Chief Executive Ara Mahdessian said in a statement. “The only way to make that happen is by investing very heavily in continuous learning and development.”

ServiceTitan plans to increase its employee count to more than 550 by the end of 2018, which the company reports will require a “quick upskilling from existing employees” as well as rapid onboarding training.

Ferguson will be tasked with running the human resources division at TaskUs, recruiting and training new employees. Previously, Ferguson served as head of people support at Denver-based Chipotle Mexican Grill Inc. for 12 years overseeing human resources for a company that grew to a staff of more than 70,000.

“Mike knows how to create and maintain programs that support an exceptional culture because he’s been doing it for over twenty years,” said CEO Bryce Maddock. “Mike managed a workforce larger than (ours), so we are confident he brings the insight and values that fit our culture,” Maddock added.

“In just the last three years, Unitas Global has grown by more than 500 percent,” said Unitas Global Chief Executive Patrick Shutt. “To continue expanding our business, we need to apply a greater focus to sharing the stories of why our customers choose to partner with Unitas Global as they advance along their digital transformation journeys. Having been in the industry for more than two decades, Scott understands this better than most.”