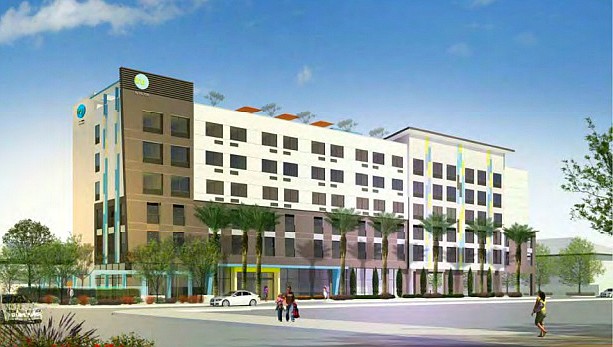 Rendering of the hotel planned for Inglewood near Rams Stadium

Inglewood may soon be getting a new hotel. The mayor and city council have approved a 120-room Tru by Hilton hotel at the corner of 111th Street and Prairie Avenue, near the future NFL Stadium for the Los Angeles Rams and the Los Angeles Chargers.

“As Inglewood grows and thrives, creating good jobs for our residents remains a top priority,” Inglewood Mayor James Butts said in a statement. “This hotel will serve our visitors well when they come to Inglewood, but more importantly, it will provide economic development dollars to the City and good jobs to our residents.”

Tru by Hilton is part of the Hilton Worldwide portfolio of hotel brands.

In addition to its 120 guest rooms, the hotel will have a market, fitness room and rooftop deck. A third of the hotel’s jobs will go to Inglewood residents. The hotel is expected to be completed in 2020.

It is just one of a handful of hotels in planning in Inglewood. The Hollywood Park Hotel, with 300 rooms, and the Lairport Hotel, with 128 rooms, are also in the planning stage, according to Atlas Hospitality Group. Atlas is an Irvine-based hotel brokerage.