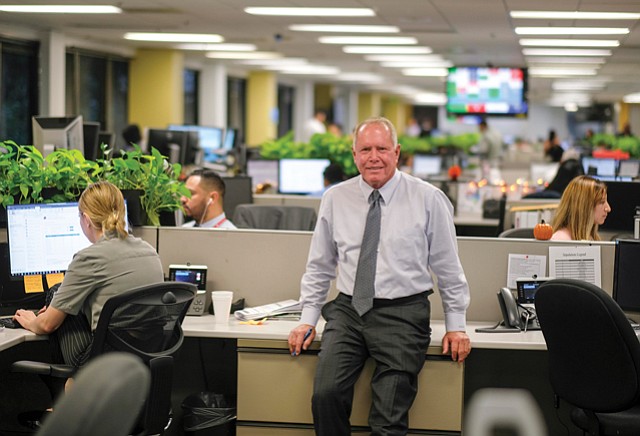 Don Hankey, chairman and the controlling shareholder of subprime auto loan lender Westlake Financial Services, every weekday morning reads the company’s operational reports on his laptop in the back of his chauffeured car during the 45 minute ride to his Mid-Wilshire office from his Malibu home.

By the time he arrives at 5:30 a.m., Hankey’s got a handle on the 30- and 60-day delinquencies of car loans on his firm’s 575,000 accounts and knows what’s happening with the roughly 15,000 car repossessions Westlake is handling. The reports are all broken down by state, so he can see early warning signs and make adjustments in future lending patterns.

“My gut is telling me everything is fine,” said Hankey of his take on today’s economy. “I’ve been doing this for 35 years.”

Everything has certainly been fine for Westlake Financial Services recently. The company’s revenue growth from 2015 to 2017 rose 52 percent to $1.12 billion from $738.7, a sales jump that placed the firm at No. 80 on the Business Journal’s 2018 list of fastest growing private companies.

Westlake Financial’s inclusion on the list was particularly notable given the company’s size; many of the companies on the list are early stage outfits that have seven or eight figure sales numbers.

Westlake is part of the Hankey Group, which is made up of seven operating companies. The group has more than 3,500 employees worldwide and projects $1.8 billion in revenue and $8.2 billion in assets for 2018.

Hankey, who was ranked No. 25 on the Business Journal’s 2018 Wealthiest Angelenos list with an estimated net worth of $3.1 billion, founded the privately held auto finance company in Los Angeles in 1978 to serve potential auto purchasers with spotty credit.

He has grown Westlake into a lending empire that stretches across the United States. The company has only seen one quarter of losses, and that came in the first three months of 2007, on the eve of the Great Recession.

Westlake issued $3.1 billion in asset-backed securitizations this year, it’s most ever. That’s up 77 percent from a year earlier. These corporate bonds or notes are backed by a pool of automobile loans underwritten by Westlake. Income payments and value are derived from the pool of underlying assets that can’t be sold individually.

Ian Anderson, Westlake Financial Services’ president, forecasts the company’s asset-backed securitization program will grow next year by 29 percent to $4 billion. Part of the reason behind the record-busting securitizations, Anderson said, is Westlake’s ability to raise funds in a rising-interest-rate environment, plus opportunistic expansion of its business.

“It’s a way to fix our cost of funds and forge a deeper auto lending relationship with big banks – like Wells Fargo and JPMorgan Chase,” Anderson said.

These loan pools sold to investors fuel growth at Westlake Financial, which plans to enter the Canadian market later this year, increase its credit lines to just over $2 billion – up 43 percent in the last year – and build out its so-called “trading floor” of sales representatives. Those reps work closely with independent and franchised dealerships across the country to finance car loans for low credit-rated consumers.

The company also created Westlake Advanced Lending & Portfolio Services earlier this year, to buy up loan portfolios from other subprime lenders who were pulling back from the market. Westlake purchased about $85 million in originations in March, or roughly 70,000 loans, from Pelican Auto Finance. The new Westlake unit also bought about $240 million of Honor Finance’s downgraded portfolio in August.

Other Westlake Financial growth initiatives come from another recently created unit, dubbed Loan Center. The month-old unit is being tested out by a handful of California dealerships and allows consumers to prequalify on a car loan before they begin shopping.

“We think this is another billion-dollar business,” Anderson said.

No acquisitions of rivals are planned as Hankey said he’s not interested in paying a premium on something he’s already built organically. The company’s biggest competitors are Dallas-based Santander Consumer USA Holdings Inc., and Southfield, Mich.-based Credit Acceptance Corp.

The FICO score, considered a key metric used by credit-rating agencies to measure a consumer’s credit health, has steadily improved among Westlake Financial customers, going from a 542 score in 2008 to 620 today. The main reason for the improvement, besides the technology that allows Westlake Financial to stay on top of consumers before they get into trouble, is the company’s decision to become a “full spectrum” lender that offers interest rates from 2.99 percent to healthy borrowers to 14.99 percent for others with lots of debt, or who have missed payments, defaulted on student loans or experienced repossessions.

“Everyone talks about revenue, but we look at operating expenses,” Anderson said. “We are pacing less than last year by about $8 million, and we grew our portfolio as large as we did,” Anderson said.

Outside analysts seem to see big, subprime auto lenders as well positioned in the market.

John Rowan, a New York-based research analyst with Janney Montgomery Scott, believes there have been substantial changes in the subprime auto lending market since private equity firms began investing in the recession-weakened industry niche back in the 2011 to 2012 timeframe. The weakened industry allowed larger companies like Westlake and other established players to take market share with their more efficient operations.

By the time the industry stabilized in 2015, these bigger players had greatly expanded, pricing some of the lesser players backed by private equity out of the market.

“We see less competition (at least two smaller private lenders have shuttered in 2018) and weaker credit scores are shrinking as a percentage of the $1.1 trillion market,” Rowan wrote in a recent research report.