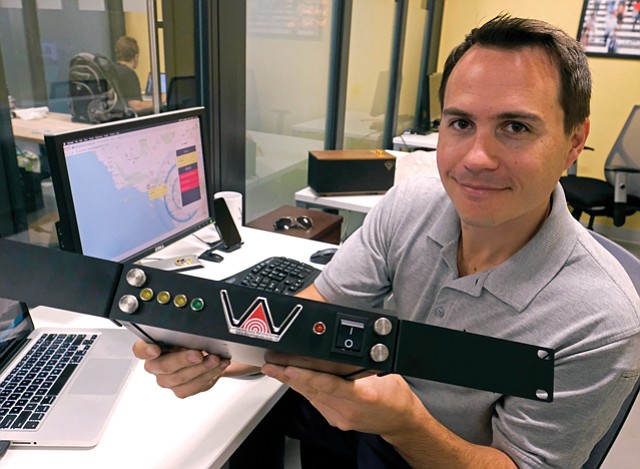 The Los Angeles region is an earthquake hot spot, so it’s little surprise a company focused on detecting seismic activity and warning its customers of an impending temblor would make its home here – or that its first customers are major local institutions.

Early Warning Labs’ QuakeAlert system – which costs between $400 and $750 per device – is already in three LAUSD schools, and Bashioum said the district is looking to distribute the system to 40 more locations through a grant from the California Office of Emergency Services. There are tentative plans to install the warning devices in all 1,200 schools operated by the district, contingent on additional funding. The contract, if fully realized, could net Early Warning Labs up to $900,000 and is only one of several revenue streams available to the company.

“The business potential is sizable, not a national market yet, but more than 50 percent of people in the country live in a seismically at-risk area, condensed mainly on the coast, so we have a very, very large market,” Bashioum said.

“The platform we built is relevant in other emergency communications that need instantaneous communication,” including active-shooter scenarios, Bashioum added.

Jill Barnes, executive emergency strategist for the LAUSD’s Office of Emergency Services, said the alert system would hopefully allow more time for students to get to safety.

“The reason we want to be involved with Early Warning is it gives us a chance to take that protective action before we can feel the shaking,” she said. “Some kids need a bit longer … time to react.”

Early Warning Labs’ QuakeAlert system can be accessed via an app, and its software can also be adapted to broadcast warnings over public address systems and open doors or shut down critical systems that could be damaged in an earthquake.

The data underpinning Early Warning Labs’ system is publicly available seismic data gathered by the U.S. Geological Survey’s ShakeAlert project, which is currently rolling out a network of 1,675 earthquake detection sites across the nation.

The utilization of public data is an interesting component to Early Warning Labs’ business model and one that can be both a strength and a weakness for the business, according to Stefaan Verhulst, the co-founder of New York University’s Governance Lab and director of its Open Data 500 project.

Verhulst said using open data creates a low barrier to entry for competition, but access to the data by various sources can actually stimulate growth. Verhulst’s research indicates most companies are using public data in a business-to-business context.

“Because it is open to everyone, it can be reviewed (for) quality,” he said. “The level of competition is not about having access to the data, it’s about being creative in how companies use it for other purposes.”

“Quite often the real competitive edge is not (just) having the access to government data but to have access to other data sources that have more value if you can aggregate with other data sets and provide insights,” Verhulst added.

That said, if a government agency decides to stop publishing data, companies relying solely on it to do business could face dire consequences. Already, Verhulst said, the Environmental Protection Agency under President Donald Trump has opted to lock certain environmental data sets.

“If that stream stops, archival data might be valuable for risk assessment purposes related to situational analysis, but it’s hard to then use it for predictions” and to monetize, Verhulst said.

“There is always a risk, but many businesses run off government data, including weather companies,” he said, but added that, in this case, he views the risk as low because the ShakeAlert is just getting started.

Of the 500 U.S. companies surveyed by NYU’s Open Data 500, 132 are located in California, and 10 are in L.A. County, including Mid-Wilshire-based Farmers Group Inc.; Rand Corp. and TrueCar Inc., both headquartered in Santa Monica, and Century City-based Factual Inc. Currently, Early Warning Labs is not on the Open Data 500 list.

“That got me interested in disaster preparedness,” he said. “I quickly saw the benefit of earthquake early warning and was aware of new tech being developed while working with other emergency management folks.”

His interest led him to the lead researchers for ShakeAlert, which began as a Caltech and UC Berkeley project. Shortly thereafter in 2013, Early Warning Labs was established and began the research and development phase for what is now known as QuakeAlert.

Future plans for Early Warning Labs include a collaboration with Johnson Controls Inc., a fire safety and building management firm based in Milwaukee. The company is working with Early Warning Labs to release the QuakeAlert system through its fire panels nationwide, which Bashioum said “will be to market in quarter one of next year, at the latest; this month we started training.”