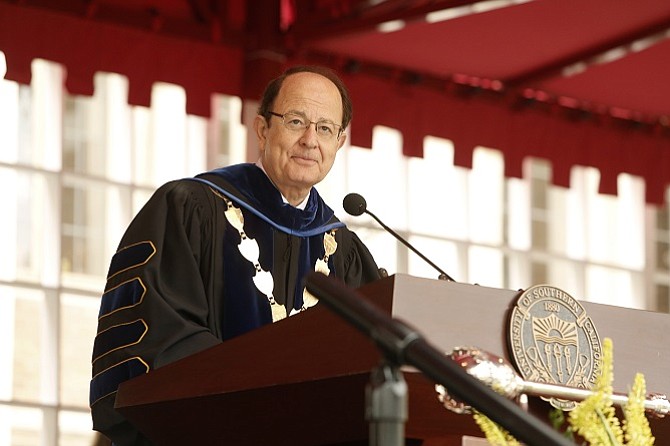 After the latest revelations in a string of misconduct scandals at the university, 200 USC faculty members sent a letter on May 22 to the university’s board of trustees demanding USC President Max Nikias resign immediately.

In the one-page letter, the 200 faculty members representing at least a dozen different schools at USC said there is mounting evidence that Nikias has failed to “protect our students, our staff and our colleagues from repeated and pervasive sexual harassment and misconduct…He has lost the moral authority to lead the University.”

The 200 faculty members represent about one-sixth of the roughly 1,200 tenured faculty at USC.

The board of trustees issued a statement May 22 in response to the faculty letter. In their statement, the trustees said, “The executive committee of the board has full confidence in President Nikias’ leadership, ethics and values and is certain that he will successfully guide our community forward. We strongly support President Nikias’ implementation of a thorough and comprehensive action plan that addresses these issues…”

Last week, the Los Angeles Times revealed that gynecologist George Tyndall, who had a clinic on campus for years, was quietly let go by the university last year after allegations of inappropriate contact and conduct towards female student patients at the clinic. Only after the Times May 17 story were allegations referred to law enforcement authorities. On May 21, six women who had been examined by Tyndall filed lawsuits against him and the university alleging he engaged in inappropriate sexual contact and conduct during the examinations. Tyndall has denied any wrongdoing.

Last summer, the Times revealed that former medical school dean Carmen Puliafito allegedly engaged in repeated drug and alcohol abuse at parties with drug addicts and criminals and that he conducted eye exams at the university while under the influence of drugs. After the university provost confronted him, Puliafito resigned as dean but still remained on the faculty and continued to conduct eye exams on campus for more than a year until the Times story published. Then, within days, USC fired him.

After the Tyndall allegations became public last week, increasing numbers of faculty said these two cases illustrated a pattern in which the university – under Nikias’ leadership – delayed notifying medical oversight boards and law enforcement authorities about the allegations, placing other students and patients at risk.

Nikias, 65, took over as USC president in 2010, succeeding Steven Sample. He has led the university in the most prodigious fundraising campaign at any university in the U.S., helping raise more than $6.6 billion in just over seven years. He also spearheaded the development of University Village, a $700 million student housing and retail complex just north of the main campus.