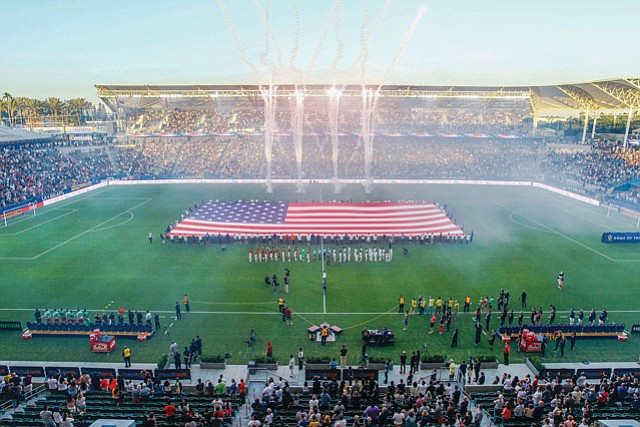 The deal was negotiated by AEG Global Partnerships and gives Kinecta the first-ever naming rights to the Galaxy’s Torrance indoor soccer and recreational facility. The credit union also will be the exclusive financial services partner of the Galaxy, and will receive signage and branding rights around StubHub Center.

Kinecta hopes the marketing partnership will increase its local membership 5 percent to 10 percent, according to Shannon Doiron, first vice president of marketing at Kinecta. Doiron said the credit union did not have a timeline over which it hoped the growth would occur.

“The regional companies and industries have networks here,” Vartan said. “As much as we love global relations services, it is valuable to have Kinecta, who has three-hundred thousand members – we knew there was a seed planted and we can let Kinecta take the grassroots approach.”

The deal calls for employees of AEG Global Partnerships parent Anschutz Entertainment Group the chance to join the credit union if they so choose. AEG is giving Kinecta access to its employees, including providing physical space for the credit union to pitch its services. Kinecta hopes the access to AEG employees will attract new business to the financial institution.

Kinecta will have two branded ATM machines in the stadium.

The credit union also will offer tickets to new members who open an account at Kinecta and have co-branded debit cards and checks with the Galaxy logo.

The Los Angeles Football Club continues to add sponsors and raise its profile in Los Angeles as it gears up for its April 29 inaugural home opener against the Seattle Sounders.

The YouTube TV sponsorship is particularly innovative, according to the club’s spokesman. The multi-year pact was the first for any United States professional soccer franchise, and allows all LAFC locally televised games to be shown on YouTube’s live streaming TV platform.

LAFC’s community marketing efforts continue in Los Angeles with its official team merchandise truck. The truck operates like a food truck, traveling around the city promoting the team and selling gear. The truck has made stops at numerous LA hotspots including – Pink’s Hot Dogs, Randy’s Donuts and Seoul Sausage, according to a team spokesman.

Response from the fan base appears strong. The team announced it sold out all 17,500 2018 season tickets for its nearly completed 22,000-seat Banc of California Stadium. LAFC also set a new Major League Soccer record for opening weekend expansion team merchandise sales when team apparel was first available Feb. 24 to Feb. 25 at its downtown pop-up store.

LAFC got off to a fast start on merchandise sales even before it agreed to a multi-year partnership with Fanatics. The apparel company will be the official in-venue retailer at Banc of California Stadium and, through a separate partnership with MLS, sell the club’s merchandise online.

The soccer club also partnered with Legends Hospitality, which will handle and operate food concessions at the stadium. Koreatown favorite Beer Belly and Bludso’s BBQ near Hancock Park were announced as the first restaurants given concession space in the stadium.

The Los Angeles Dodgers will honor one of the greatest and most memorable plays in the team history with the Kirk Gibson seat package for the 2018 season.

This is the first seat to be individually honored at Dodger Stadium and is located in the right field bleachers where Gibson’s historic walk-off home run landed in Game 1 of the 1988 World Series. The seat is painted blue, adorned by Gibson’s signature.

The package sells for $300 and includes an accompanying seat, two T-shirts, and food and drink. Two hundred dollars of the $300 from each package sold will be donated to the Kirk Gibson Foundation to raise money and awareness for Parkinson’s research. Typical right field bleacher seats are priced at $43 and $45 on the Dodger’s website.