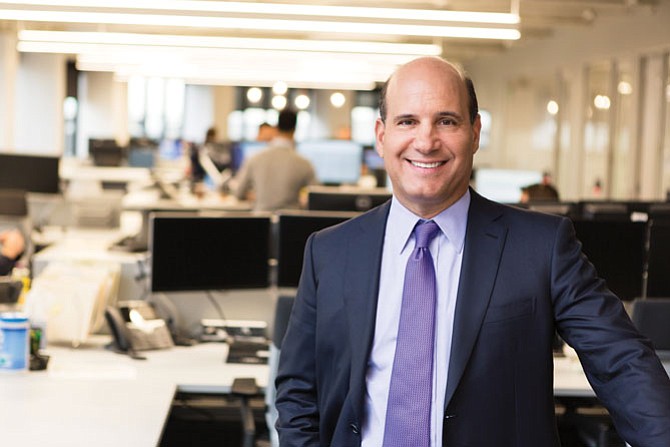 Michael Burke got off to a bold start within days of taking over as chief executive of Century City-based engineering firm Aecom in March 2014 by approaching a larger rival about buying it out.

The newly minted boss took the opportunity of the Easter holiday to present his vision for a vertically integrated behemoth engineering and construction firm to Martin Koffel, then chief executive of San Francisco-based URS Corp.

Both companies had been rolling up smaller niche players at a rapid clip.

The two men shared a vision of what was needed to survive in an industry where mid-sized companies such as theirs were disappearing.

Each saw the market was stratifying into small niche players on one end and a handful of global megafirms on the other.

“We saw that what was emerging was a handful of vertically integrated companies – each with about 100,000 employees and $20 billion in annual revenue – that were going to cover the world,” Koffel said. “Michael felt so strongly about this that he approached me. But this was not an ego trip on his part – it was all about the strategy and the good of the company – both of our companies.”

The outcome of that conversation was Aecom’s $6 billion purchase of URS, which closed in October of 2014 and put Burke at the head of one of the largest engineering and construction firms on the planet. 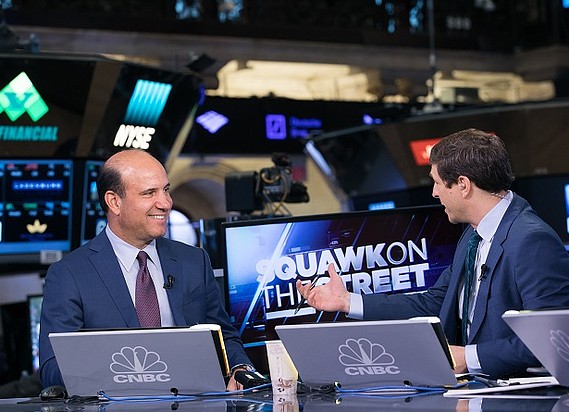 Expert: Burke on CNBC's Squawk on the Street (photo courtesy of the New York Stock Exchange)

That was the biggest and most astonishing of the 47 acquisitions that Burke, 54, has overseen since entering the C-suite at Aecom in 2006 as chief financial officer.

All of the acquisitions have been aimed at creating a one-stop shop for building and infrastructure projects – from concept through engineering/design, financing and construction and on to operation and maintenance of the finished projects.

“The major building blocks are now in place,” Burke said during a recent interview with the Business Journal in his Century City office.

Aecom now has a market capitalization of $5.8 billion. It posted $18.2 billion in revenue and about $340 million in earnings in 2017, and ended the year with a project backlog of $48.7 billion – a figure larger than the GDPs of half the world’s 195 countries. Its 87,000 employees make Aecom the second-largest company ranked by total global employee count headquartered in Los Angeles County, behind Walt Disney Co.

Aecom is now up there with a handful of other big names in the engineering and infrastructure sectors, including Bechtel Corp. in San Francisco, Dallas-based Jacobs Engineering, and Fluor Corp. of Irving, Texas. Aecom has contracts on six of the world’s seven continents – which would be all seven continents except that work concluded last year on a research station in Antarctica – and in more than 150 countries.

It is for this combination of transforming Aecom into an engineering and construction giant and raising the company’s profile on its home turf of Los Angeles that the Business Journal is bestowing its annual Business Person of the Year award on Burke for 2018. He became the newest member of the Business Journal’s Business Hall of Fame during an awards luncheon on March 21 at the Millennium Biltmore hotel. 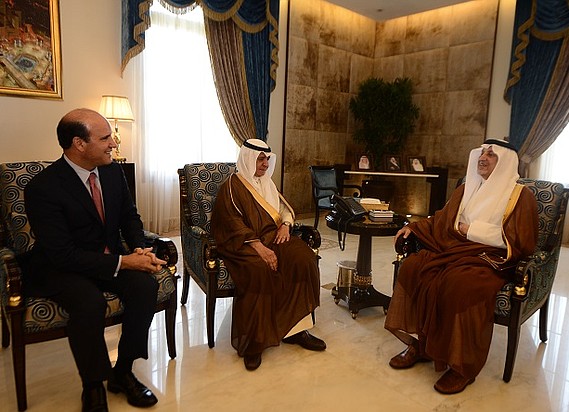 Burke always had a passion for business.

He studied accounting in college, and eventually landed at accounting giant KPMG, where he rose through the ranks to managing partner for the western U.S. He moved to Aecom, and within a year was named chief financial officer tasked with steering the effort on the company’s 2007 initial public offering that raised $400 million and put a $2 billion valuation on the company.

“The idea behind all these acquisitions is to give our clients access to a full plate of solutions,” Burke said. “We don’t want to wait for our clients to discover their own problems and come to us to solve them. We want to let them know about the solutions even before they know they have problems that need solving.”

But these purchases paled in comparison with the 2014 URS deal.

There was concern in some quarters that buying and then integrating a larger company could prove too challenging, according to Linda Griego, a Los Angeles businesswoman who chaired the Rebuild LA committee after the 1992 riots and joined Aecom’s board in 2005, the same year Burke came to Aecom.

But the services each company offered and their respective client bases complemented each other, Griego said.

Aecom’s pace of acquisitions is unprecedented in the annals of engineering and construction firms, according to Gary Tulacz, senior editor of Engineering News Record, a trade publication based in Troy, Mich. ENR ranks Aecom as the largest design company in the world.

“There are other companies, especially in Europe, that are building themselves into vertically integrated companies capable of handling all aspects of building and infrastructure projects, but nobody has done this on the scale that Aecom has,” Tulacz said.

Aecom even has a project finance arm known as Aecom Capital Investments that invests in real estate projects its other subsidiaries work on; the investment returns can then be used to finance public private partnerships, among other things.

One of the challenges of making all these acquisitions, Tulacz said, is the ability to integrate all the acquired companies and their disparate corporate cultures into a cohesive whole.

Burke said he’s spent much of the past three years overseeing this integration effort.

Aecom board member Griego said one of Burke’s strengths has been to push all of the acquired companies to behave as one unified entity.

“His strategy is to bring added value to each of the (acquired) companies and then to start to change the culture,” she said. “So, if one of the units was in the water business and had a client that also needed engineering consulting, that unit could turn to Aecom (corporate)…to find that other unit that could provide that engineering consulting. If Mike hadn’t insisted on this, some of these companies that had been acquired could have continued to compete against each other.”

Aecom and its predecessor companies going back more than three decades have always worked on projects in Los Angeles. But in the last three years, Aecom has stepped up the focus on its backyard market.

“Los Angeles is our hometown – the city we have the most affection for,” Burke said.

Besides the aforementioned stadium, subway and Metropolis projects, Aecom’s other local projects include:

• Construction and – through Aecom Capital – co-financing of a $300 million mixed-use Lowe Enterprises project at an Expo Line light rail station in Culver City.

• Aecom Capital co-financing with Combined Properties of a hotel and condominium tower complex on the old House of Blues site in West Hollywood.

There’s also a high-profile symbolic measure of this devotion to Los Angeles: the Aecom name on its downtown office tower is the largest such sign in downtown, according to Burke.

Aecom also is using its expertise in the hopes of creating future work in Los Angeles.

The company has submitted concepts to the Los Angeles County Metropolitan Transportation Authority for fast-tracking five rail projects, including a 20-mile rail line from downtown’s Union Station to Artesia. Aecom also last summer put forward its own conceptual design for redevelopment of the Los Angeles Riverfront.

Board member Griego said she has long pushed for the company to be more proactive in pushing projects such as the riverfront redevelopment forward before the bidding stage.

“I pointed out that if you (Aecom) get involved, you can help push for these projects to see the light of day,” Griego said. “Otherwise, the projects might not happen at all.”

The company was the master planner for both the 2012 Summer Olympic Games in London and the 2016 Games in Rio de Janeiro, which prompted the chief executive of the LA 2028 Organizing Committee to turn to the company for planning of the next Games in Los Angeles.

“With their added construction capabilities since the London Games, Aecom can work on almost anything connected with the Olympics,” said Gene Sykes, chief executive for the LA 2028 Organizing Committee.

Sykes said he first met Burke about 10 years ago, just as Aecom started design work for the London Games.

“Long before I got involved in this effort, Mike was the first one to talk to me about the Olympics and how vital they could prove for Los Angeles,” Sykes said. 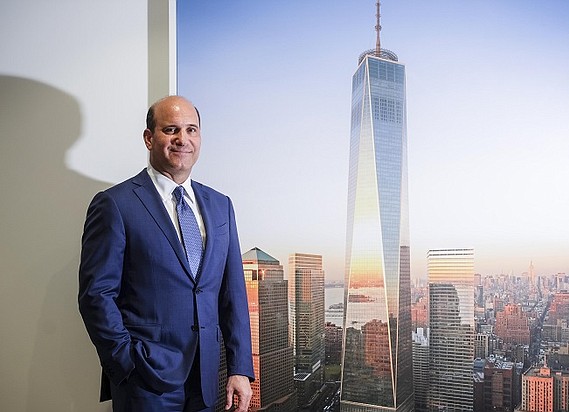 Bi-coastal: Burke with an image of One World Trade Center in New York, of which Aecom Tishman provided preconstruction and construction management services. (photo by RINGO H.W. CHIU/LABJ)

Outside of Aecom, Burke recently assumed the chairman’s post of the U.S. Business Roundtable’s infrastructure committee.

That committee had input on the recent infrastructure plan put forward by President Donald Trump, which calls for about $200 billion in federal spending but leaves hundreds of billions of dollars more in investments up to state and local governments and the private sector.

Burke said the plan generally is the right approach.

“The size of the investment needed – at well over $1 trillion – is bigger than government’s ability to pay,” Burke said. “But there are large pools of capital in pensions and sovereign wealth funds just waiting to put capital into infrastructure projects.”

Aecom stands to be a big beneficiary of the infrastructure plan, as long as that plan retains its heavy focus on private sector investment.

Away from work, Burke often can be found on the golf course or the ski slopes or spending time with his wife, Joan, and their two children.

He also serves on the board of the Southern California chapter of Children’s Bureau, which provides child abuse prevention and treatment services to at-risk children.

Jacqueline Meek, chief development officer for the chapter, said Burke got involved several years ago through its annual golf event.

“He cares deeply about helping the children: he participates in meetings and is active in committees,” Meek said. “I get responses back directly from Mike, not one of his assistants.”

Meek tells the story of how Burke – recovering from recent surgery – showed up two years ago in a leg cast at the charity’s annual carnival at the Santa Monica Pier.

“It can’t have been easy for him in that cast spending hours there walking on the uneven railroad ties of that pier and meeting and greeting everyone. That just demonstrates the level of commitment he has.”