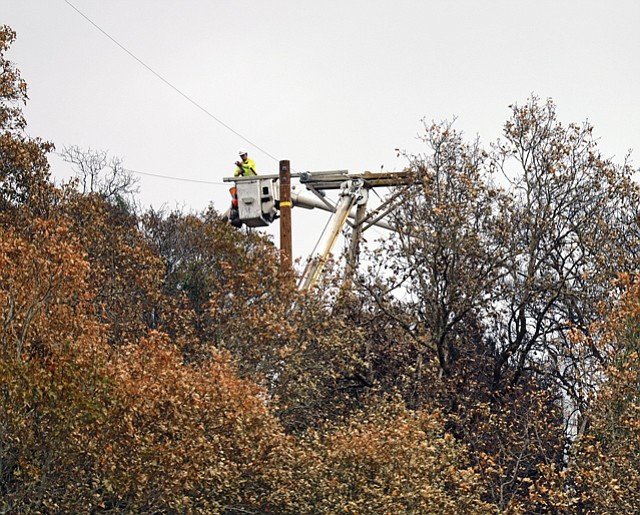 Potential Problems: SCE workers clear vegetation around the utility’s power lines, which are under scrutiny as possible causes of wildfires.

Expect shareholders of Edison International – who have seen $4 billion in its market cap wiped out in recent months amid concern about liability for last year’s devastating Thomas Fire – to keep their eyes on Sacramento next month.

That’s because state lawmakers are set to craft legislation spelling out responsibility for billions of dollars in damages from last year’s wildfires in cases where the cause is attributed to equipment of any of the state’s three investor-owned utilities. The legislation, coming out of a newly-formed bicameral conference committee, also will apply to future wildfires.

The stakes are high for Southern California Edison, the utility subsidiary of Rosemead-based Edison International. At issue is whether Edison International shareholders or ratepayers could be on the hook for up to $4 billion in damages from the Thomas Fire, and possibly more damage claims from the subsequent deadly mudslides in Santa Barbara County this past January.

“2017 was such a huge year for wildfire liability –there is a sense of urgency now that the risk of wildfire year-round is growing and our Governor (Jerry Brown) is calling it the ‘new normal,’” said Darren Bouton, director of state public affairs for Southern California Edison. “The intensity and frequency of wildfires is increasing, so we need to have this fixed sooner rather than later.”

The California Department of Forestry and Fire Protection (Cal Fire) has not yet determined the cause of the 282,000-acre Thomas Fire – which burned through much of Ventura and Santa Barbara counties and damaged or destroyed more than 1,300 structures last December, ranking as the largest blaze in California’s recorded history. The acreage came to 440 square miles, nearly equal to the 469 total square mile of the City of Los Angeles.

Edison International shareholders are concerned about how much they would be on the hook if the cause is linked to Southern California Edison. They have watched as state fire investigators traced the cause of at least a dozen of the wildfires that ravaged Northern California last fall to power lines or other equipment or wiring operated by Pacific Gas & Electric, the electric utility subsidiary of San Francisco-based PG&E Corp. The cause of the most destructive of the Northern California blazes, the Tubbs Fire, is still under investigation.

Fitch Ratings of New York laid out a worst-case scenario for Edison International in May, considering the possibility that the utility will be forced to pay out $4 billion in Thomas Fire-related liabilities over four years. Fitch issued a negative watch on bonds issued by Edison International, which reported net income of $689 million last year on revenue of $12.3 billion.

“The Negative Watch reflects potential financial exposure to the destructive California wildfires that raged across the state in 2017, causing significant damage in SCE’s service territory,” the rating report said. “If liability…is applied to these claims, SCE would be compelled to absorb the large majority of wildfire-related costs within a relatively short time-frame.”

Southern California Edison’s liability risk goes beyond the Thomas Fire. Its first quarter earnings report filed with the Securities and Exchange Commission disclosed that the utility has been named as a defendant in lawsuits seeking compensation for damages stemming from the Jan. 9 Montecito mudslides in Santa Barbara County, which originated on slopes denuded of vegetation by the Thomas Fire. Those mudslides destroyed 166 structures, damaged another 394 structures and killed 21 people, according to the 2018 Southern California Watershed Task Force report for Santa Barbara County.

Fitch did not include the Montecito mudslide damage in its rating worst-case scenario assuming $4 billion in liability for Edison International. The company’s share price plunged 25 percent from around $80 to about $60 in the weeks during which the Thomas Fire was burning. They have since made up some of that ground, closing at $66.06 on July 24.

The determination by state fire investigators that put Pacific Gas & Electric on the hook for at least $10 billion in liabilities from last fall’s Northern California wildfires – and the potential for Southern California Edison to be held responsible for billions of dollars more in its territory – has utilities and their lobbyists urging lawmakers to reform the system under which liability is determined.

At the center of the legislative debate is the legal doctrine of inverse condemnation, under which government entities and electric utilities are required to pay compensation when property is damaged by facilities providing public services, such as electricity.

Investor community concern over this potential liability has been heightened due to a ruling from the California Public Utilities Commission last fall that assigned liability for $380 million in costs related to three 2007 wildfires in San Diego County to San Diego Gas & Electric shareholders instead of that utility’s customers. The commission ruled that SDG&E, a unit of Sempra Energy of San Diego, had failed to act as a prudent manager of its grid infrastructure despite following relevant rules and regulations at the time.

Southern California Edison’s Bouton said the top priority of Edison International and the other two investor-owned utilities in the state is to reform inverse condemnation doctrine.

“We are looking to prevent unlimited liability for damages caused by our equipment even when we didn’t do anything wrong,” Bouton said. “We also support replacing the current strict liability standard with a ‘reasonableness’ standard.”

Bloomberg News reported last week that Gov. Brown said he supported legislation under which the investor-owned utilities would not be liable for damages for future wildfires, provided they acted ‘reasonably’ to prevent their equipment from sparking fires. But, as of last week, that legislation only deals with future fires, not the billions of dollars in damage from last year’s fires.

Bouton also said the utilities are seeking clear, up-front standards for mitigation measures, such as clearing vegetation away from wires, fireproofing utility poles and turning off power during “red flag” wind conditions.

“Where a utility substantially complies with an approved mitigation program, we want a finding that the utilities actions are deemed reasonable and prudent,” Bouton said.

Edison International has spent $864 million since 2014 to replace 54,000 poles with “fire hardened” models made of fire-resistant materials and with more insulation around the wires. The company and the other investor-owned utilities are seeking a “fair apportionment” of liability costs between ratepayers and shareholders, Bouton said.

“Right now, it’s pretty much an all-or-nothing approach, meaning all the costs are either borne by shareholders or ratepayers,” he said. “The costs need to be apportioned.”

But Bouton also said that if a utility is found to be in “substantial compliance” with wildfire mitigation standards, ratepayers should shoulder 100 percent of the damage costs, a position almost certain to generate pushback from ratepayer advocates.

One key piece of legislation is likely to be a measure to securitize the utility liability so that the payout is spread over a longer time period, similar to a bill currently on the table: AB 33, by Assemblyman Bill Quirk, D-Hayward. Gov. Brown has expressed support for this concept, as did Edison’s Bouton.

“Selling bonds that ratepayers would pay back over 10 years rather than in one giant rate increase seems to make more sense,” Bouton said.

The concerns over liabilities stemming from wildfires came as Southern California Edison and fellow utilities face significant defections by customers opting to take their business to the growing field of community-based power providers.

About 100,000 customers have abandoned Southern California Edison for local community-based power providers so far, and another 1.4 million are expected to jump ship by 2020, according to the utility’s own projections.

The dour estimate looms with SCE locked into certain long-term renewable energy contracts that have it paying above market price for solar and wind power.

Those deals leave the company – which has five million customers throughout Southern California – concerned that the expected exodus will drive up costs for its remaining customers, prompting more defections and a downward spiral that could fundamentally threaten the investor-owned utility’s existence.

The situation has spurred SCE to petition the state Public Utilities Commission for permission to charge higher fees to departing customers as a way to cover the costs of the expensive long-term renewable energy contracts.

SCE has joined two other investor-owned utilities – PG&E and SDG&E – to put forward the proposal. The trio wants to change the way repayment costs for these contracts are calculated so that remaining customers pay less and departing customers more.