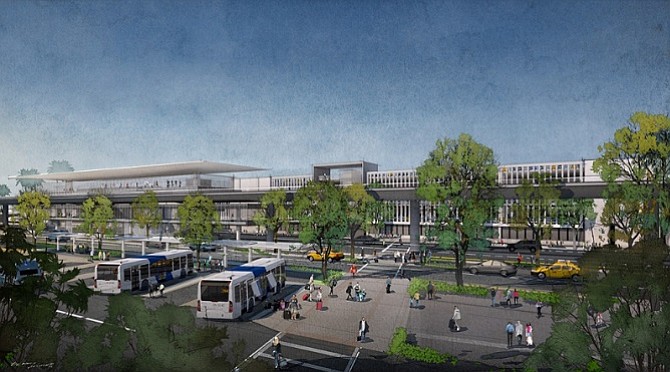 A rendering of the planned Intermodal Transportation Facility at LAX

The Los Angeles Board of Airport Commissioners on July 11 voted to award a $209 million contract for a new parking structure near Los Angeles International Airport to Swinerton Builders, airport officials announced.

The five-level parking structure – known as Intermodal Transportation Facility West – will have about 4,700 spaces and is part of the $6 billion plan to modernize road and rail access to Los Angeles International Airport. It will connect to the $2 billion automated people-mover system now under construction, allowing passengers to park away from the congested airport terminal loop.

The structure will also contain a new concessions area, a pick-up and drop-off curb for both commercial and private vehicles, and construction of pedestrian walkways and plazas to connect the facility with the surrounding area. Two new roadways will also be built to the west and north of the structure to improve vehicle flow.

San Francisco-based Swinerton Builders is expected to complete the parking structure in early 2021; a shuttle will temporarily transport passengers to the terminal area until the people mover is operational in 2023.

Airport officials did not disclose the number or identity of bidders for the parking structure project.

“Today’s approval to build the ITF-West represents another milestone in developing a more reliable and convenient way for travelers to access the terminals,” Sean Burton, airport commission president said in a statement. “Earlier this year, we awarded the contract to build an Automated People Mover and later this year we plan to award the Consolidated Rent-a-Car facility contract. Together, these projects will provide much needed parking and traffic relief for our passengers and the community.”

Currently, LAX has about 8,300 parking spaces in the seven terminal loop structures. Lot C just outside the terminal loop had another 4,300 spaces, but last fall about half of those spaces were permanently removed to make way for various construction projects, leaving 2,200 spaces. This new parking structure will more than offset that loss, resulting in a net addition of 2,500 spaces in airport-operated lots. Hundreds more spaces are available at several privately-operated lots and structures near the airport, such as Park One and the Parking Spot.