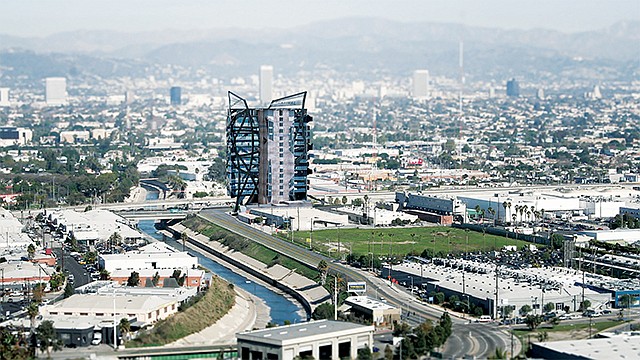 The funding, announced Dec. 5, comes as Samitaur has allegedly fallen behind schedule in construction on one building in the portfolio, a 49,900-square-foot office fully leased to Nike Inc. Earlier this year, Nike sued Samitaur for $1 million for failure to complete construction.

Samitaur Constructs declined to comment or provide additional information on the financing.

“This is a unique opportunity to enter into another financing relationship in Los Angeles, a market where we would like to grow,” said Brad Cohen, senior managing director at Square Mile Capital, in a statement.

The portfolio also includes a pair of buildings leased to five tenants, including collaborative workspace owner WeWork Cos. Inc. The combined buildings, comprising 88,947 square feet, are in downtown Culver City near the converted warehouse offices known as Hayden Tract.

The standout structure in Samitaur’s portfolio project is The Wrapper, a 16-story building plus a penthouse with an eye-catching, decorative steel structure wrapped around it. Cohen called the building “a future Culver City landmark.”

Located near the Expo Line’s La Cienega/Jefferson station and a handful of other new developments in the area, the Wrapper building will contain 180,548 square feet of office space.

Irish packaging company Smurfit Kappa Group signed a lease for a 120,000-square-foot industrial building in the City of Industry that will serve as a distribution center for the western United States.

With the expansion in Los Angeles, Smurfit Kappa will be able to provide packaging to rapidly growing e-commerce businesses and other retailers as the U.S. economy hums along.

The 5-year lease was valued at more than $5.7 million, according to Klabin Co./CORFAC International, which represented Smurfit Kappa. The building is located at 505 S. 7th Ave.

“We are extremely proud of this lease transaction, which brings together a company that is at the top of its global industry with Majestic Realty, a best-in-class owner of industrial real estate,” Ouellette said.

SRS Real Estate Partners is opening its first Los Angeles office in 2019, focusing on the retail sector and working with global clients to expand their presence in the Southland. The new office will be in either Century City or Santa Monica.

The company has hired new vice president and managing principal Mike Rielly, a 20-year veteran of commercial real estate in Southern California. Rielly, who was previously president of Next Wave Retail Inc., has helped local and international brands including Uniqlo Co. Ltd., Mango MNG Holding and True Religion Apparel Inc. to expand in the United States.

“We are excited to have Mike join us to lead this focused specialty line of business at SRS,” said Chris Maguire, chief executive of SRS Real Estate Partners, in a statement. “He is a proven leader who will be able to grow the SRS Signature Group in North America as well as expand our global services in this segment.”