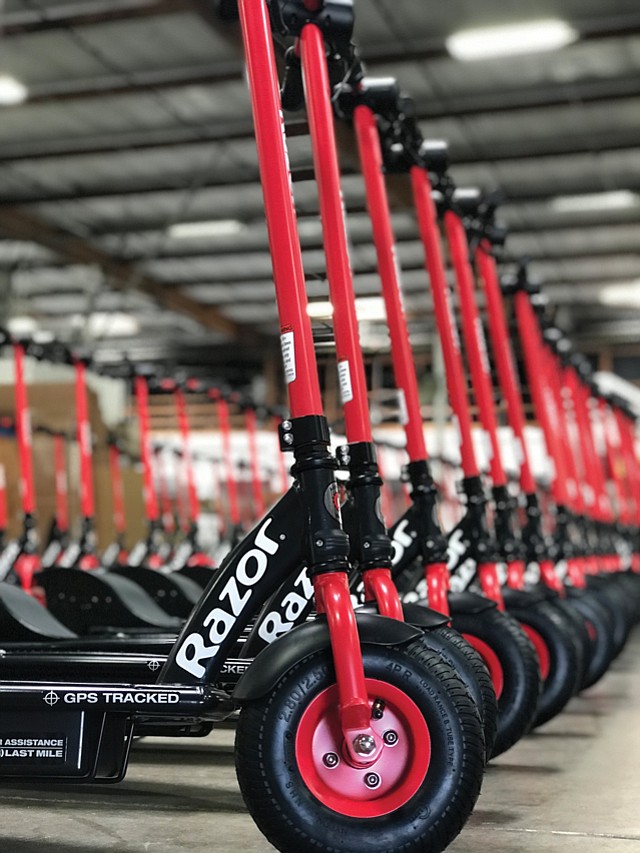 The company whose brand became synonymous with folding kick scooters is wheeling its way into Long Beach with an electric model as part of a shared transportation initiative.

Cerritos-based Razor USA announced August 2 its first foray into the shared electric scooter market – where riders can get access to the dockless vehicles through an app, with a flat fee and additional per-minute charges. The company became the first dockless e-scooter company to operate in Long Beach when it spread approximately 150 scooters on sidewalks across the city as part of the three-month pilot program.

The move comes as electric scooters surge in popularity. Companies such as Santa Monica-based Bird Rides Inc. and Neutron Holdings Inc., which operates Lime Scooters, are scattering scooters in neighborhoods and cities across Los Angeles County. The push – profit-driven motives aside – is part of a movement to solve the so-called last-mile transportation conundrum, where commuters, tourists and others have difficulties navigating the final stretch of terrain to their destinations via current public transportation options.

Razor’s Chief Operating Officer Danny Simon said the company has worked closely with the City of Long Beach for about two months to gain approval there, and put standards in place aimed at ensuring its scooters will be used safely during the initial pilot.

“We wanted to maintain a close relationship with them and we’ve been keeping them informed every step of the way,” said Simon, who hopes at the end of the pilot to win a permit extension for Razor.

Razor charges a base fare of $1 and an additional 15 cents per minute for scooter use – the same rate Bird and Lime charge in other areas. Simon declined to give specifics about the company’s financial commitments to the scooter program, or any details about the cost of operating in Long Beach. He said the company has applied for operation permits in Santa Monica and San Francisco and is “closely watching Los Angeles.”

The scooter boom has been controversial in the Los Angeles area. Safety concerns and scooters strewn about on public right of ways have been among the chief complaints by citizens and lawmakers alike. Few – if any – laws exist regulating these companies or their users.

Temporary moratoriums on the dockless electric scooters have been imposed by municipal authorities in several cities in the area, including Beverly Hills, Santa Monica and West Hollywood. Los Angeles City Councilmember Paul Koretz wants to ban indefinitely all scooters in the County’s largest municipality until a full slate of regulations are implemented.

Most electric scooters average speeds up to 15 miles per hour, but regulations passed August 8 by the Los Angeles City Transportation Committee mandate a maximum speed of 12 mph.

Razor’s efforts to work with city officials on its rollout in Long Beach stands in contrast with expansions by Bird and Lime, both of which at times acted without consulting local authorities.

Razor isn’t the only outfit that will enter Long Beach under the auspices of the city. Five other shared scooter companies are still in the application process.

“I think [scooters] do have the potential to be a positive thing for the city,” Long Beach Transit spokesman Mike Gold said. “Long Beach is an urban and large area so I think this could give people more options to get around.”

Gold said the scooters supplement public transit, providing an option that can make a trip quicker for some commuter.

“Scooters can actually be beneficial for transit because then someone can take the bus one way or take the bus back,” Gold said. “It’s actually providing opportunities to increase mobility.”

He added that cities will likely look to expand bike lanes to accommodate more riders – both cyclists and scooter users – in the future.

Actively courting local lawmakers is one of the main differentiators in Razor’s shared electric scooter rollout, but it also has other features that distinguish it from competitors. The bright red scooters the company uses were specifically designed by Razor for shared rides. Bird and Lime are both using mass-produced scooters from Segway parent company Ninebot Inc.

“Given that most of the scooters are from a single vendor, we think it’s a competitive advantage to put out a scooter specifically designed for shared scooting,” Simon said.

Razor has manufactured over 34 million scooters for commercial use since it started in 2000, and approximately 13 million of those have been electric.

Los Angeles County Metropolitan Transportation spokesman Dave Sotero said that although the docked Metro bike-share program recently lowered its prices to $1.75 per ride to compete with scooters, it still views e-scooters as a supplement to transit. L.A. Metro budgets roughly $35.5 million per year to operate the bikes.