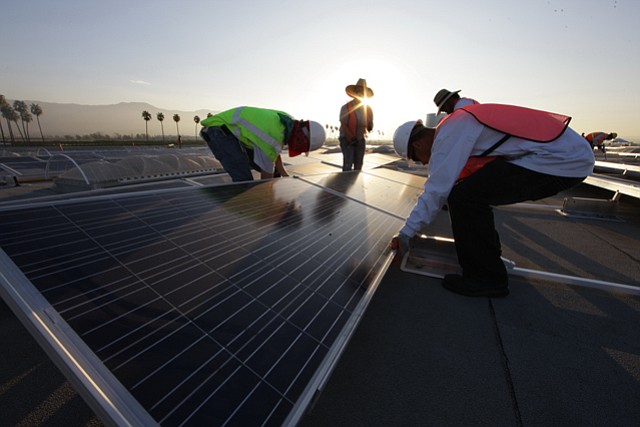 Los Angeles — About 100,000 customers have abandoned Southern California Edison for local community-based power providers, and another 1.4 million are expected to jump ship by 2020, according to the utility’s own projections.

The dour estimate looms with SCE locked into certain long-term renewable energy contracts that have it paying above market price for solar and wind power.

Those deals leave the company – which has five million customers throughout Southern California – concerned that the expected exodus will drive up costs for its remaining customers, prompting more defections and a downward spiral that could fundamentally threaten the investor-owned utility’s existence.

The situation has spurred SCE, a unit of Rosemead-based Edison International, to petition the state Public Utilities Commission for permission to charge higher fees to departing customers as a way to cover the costs of the expensive long-term renewable energy contracts.

SCE has joined two other investor-owned utilities – Pacific Gas & Electric in the Bay Area and Sempra Energy’s San Diego Gas & Electric – to put forward the proposal. The trio wants to change the way repayment costs for these contracts are calculated so that remaining customers pay less and departing customers more.

“SCE supports customer choice, as long as one set of customers is not left to pick up the cost for power purchased for other customers and system reliability needs are met,” Colin Cushnie, vice president of energy procurement and management for SCE, said in an email.

A relatively new class of competitors called community-based power providers are fighting the petition, putting forward their own proposal to reduce the current exit fee that their customers must pay upon leaving Edison and the other utilities. The Clean Power Alliance of Southern California is one of the newest – and potentially the largest – of the community-based power providers was set up by the County of Los Angeles late last year.

“The county is ready to bring consumer choice to the electricity markets in LA and Ventura counties,” said Sheila Kuehl, chair of the Los Angeles County Board of Supervisors and vice chair of the Clean Power Alliance Authority. “We are counting on the state Public Utilities Commission to ensure that the Clean Power Alliance is not needlessly hindered from bringing cleaner and cheaper power options to local residents and businesses.”

The dueling proposals will be considered later this year by the Public Utilities Commission, which hopes by the end of this year to come up with a new set of rules governing who pays for the renewable energy contracts.

The dispute doesn’t affect customers of municipally owned utilities such as the Los Angeles Department of Water & Power.

The issue has taken on more importance with the spread of community-based power providers, which were first authorized by the state Legislature in 2002. These providers, primarily set up and run by local governments, promise they can deliver power to their customers for up to 10 percent less than the investor-owned utilities, in part because they can purchase renewable power more cheaply than the rates the utilities locked in for the long-term contracts a decade ago, when renewable energy costs were higher.

All three investor-owned utilities negotiated deals while facing state mandates to have certain percentages of their power portfolios come from renewable sources on a set timeline: 20 percent by 2010 and 33 percent by 2020.

The utilities rushed to sign long-term contracts as the 2010 deadline neared. The deals typically were 20 years in length, and locked in sufficient renewable power supplies to meet the state mandate, with the utilities committed to set prices that are now well above market rates.

Solar power prices especially have come down sharply in recent years as more supply has come on line and the cost to produce solar panels has dropped. According to a report issued last September from Lawrence Berkeley National Laboratory, prices for solar power from large scale and mid-scale solar projects dropped about 60 percent between 2010 and 2016. Prices for wind-generated power declined more than 40 percent over that same time period, according to a different report from the laboratory released last August.

At issue in the current debate is the exit fee – technically known as the Power Charge Indifference Adjustment – that customers who exit the utilities for the community choice providers must pay to ensure that remaining customers don’t get stuck with higher costs to pay off the long-term renewable energy contracts.

The utilities contend that these renewable power supplies were purchased on behalf of all of their customers and that customers who leave their systems should continue to pay their share once they leave. They argue the current exit fee formula – which was established in 2012, before the current proliferation of community-based power providers – is inadequate. Left as is, they say, the current structure would mean too much of the long-term contracts’ costs would be added to the bills of remaining customers, giving them more encouragement to leave and setting in place a downward spiral.

SCE’s Cushnie said 100,000 Edison customers exited for community-based providers last year, with many going to one set up by Lancaster in 2015 and another in Apple Valley set up last year. SCE projects that the larger county-run community choice provider now in operation will push the number of defections to 1.46 million customers by 2020, representing about 20 percent of the utility’s current power load.

The association’s counter proposal says the long-term renewable power contracts the investor-owned utilities inked years ago are too expensive, and calls for them to be “securitized” at lower rates, along with other steps to shave a cumulative $2 billion off contract costs overall. SCE would see $900 million in cost savings under the proposal, according to the association.

The lower cost would erase any need to raise the exit fee and it might even be able to be lowered, they contend.

“The Community Choice Aggregators have been waiting for the opportunities presented in this rulemaking to comprehensively address the equitable sharing of utility power costs among customers of the utilities, community choice aggregators and electric service providers,” Beth Vaughan, the association’s executive director said in a statement.

Somebody is going to get saddled with the high costs of these older long-term renewable power contracts no matter which way the PUC decides later this year, according to Mark Cooper, senior fellow for economic analysis at the Institute for Energy and the Environment at Vermont Law School in South Royalton, Vt.

“Unless the people fleeing Edison and the other utilities cut the cord entirely and go completely off the grid, they should be paying for the share of the costs that they had before leaving,” Cooper said.

“But the total dollar value of these expensive long-term contracts should be shrinking too,” he said. “Whether that means the utility shareholders bear some of the burden or the renewable power providers that signed the contracts with the utilities, that’s the allocation challenge that now awaits the PUC.”