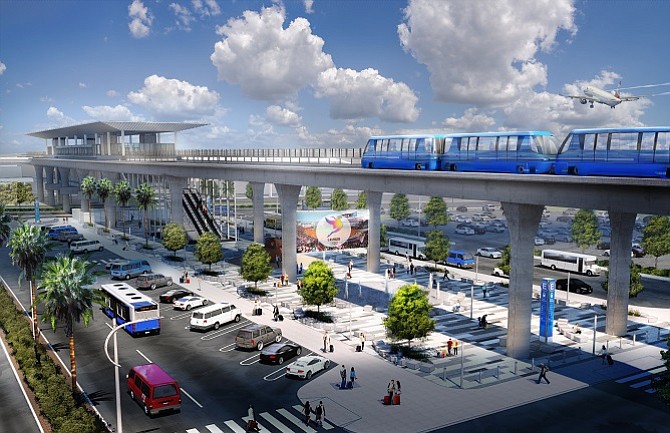 Rendering of East Plaza for the proposed people mover at LAX

The Los Angeles World Airports Board of Commissioners on April 5 voted to award a $4.9 billion, 30-year contract to a contractor consortium to design, construct and operate the planned people mover at Los Angeles International Airport.

The board awarded the contract to a consortium of seven contractors known as LAX Integrated Express Solutions, or LINXS. The vote came six weeks after an initial decision to begin negotiations with the contractor consortium. The price of the contract increased $400 million to allow for flexibility in interest rates for financing over its 30-year duration, LAWA spokesman Mark Waier said.

The contract next goes to the Los Angeles City Council for consideration later this year.

“Today’s vote brings us one step closer to rail at our airport --- and a city that is better connected than ever before,” Los Angeles Mayor Eric Garcetti said in a statement.

“For decades, we have talked about linking public transportation to LAX and this has been a top priority for Mayor Garcetti and this board,” commission president Sean Burton said. “Today, we officially enter into a critical three decade partnership with LINXS and take our first concrete step towards achieving this historic and important goal.”

Unlike many public infrastructure contracts that are just for design and construction, this contract is to include all phases of the people mover: Design, financing, construction, operation and maintenance. That’s why the contract value is more than double the anticipated $2 billion construction cost.

LINXS was selected from among five bidding teams; LAWA staff gave it the highest technical score.

The consortium is comprised of seven prime contractors: