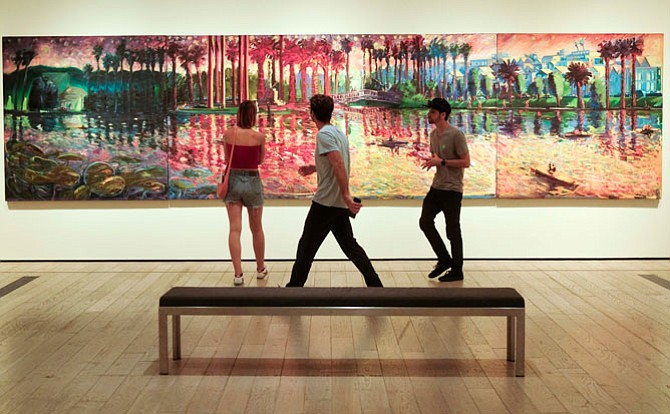 Brushing Up: One of the works in LACMA’s ‘Playing With Fire: Paintings by Carlos Almaraz’ exhibition, part of the ‘Pacific Standard Time: LA/LA’ event. Photo by Ringo Chiu.

No, that’s not a reminder to set your clocks forward for the end of daylight saving time – hold off until November for that.

This is about the launch of the second Pacific Standard Time project, a collaboration of more than 70 Southern California cultural institutions, supported by grants from the Getty Foundation.

The new incarnation, titled “Pacific Standard Time: LA/LA,” will launch Sunday with a range of community events, including one-day free admission to 50 museums. The event will explore the connection between Latin American and Latino art and the deep ties both have to Los Angeles. Events and exhibitions will continue through January.

The first initiative, “Pacific Standard Time: Art in L.A. 1945-1980,” with six months of exhibitions and events between October 2011 and March 2012, explored the history of art and architecture created in Los Angeles during the postwar period.

L.A.’s arts leaders are hailing Pacific Standard Time 2.0 as another chance to contribute to arts scholarship as well as educate the community about an integral aspect of local culture.

The event is also an economic driver with business and arts leaders expecting increased financial benefit.

Out and about: PST venue sampling

Golden Kingdoms: Luxury and Legacy in the Americas

of luxury arts in the Americas.

Photographic archive of La Raza, the L.A. newspaper central to the Chicano Rights Movement of the 1960s-’70s.

A Getty-commissioned study of the first PST from the Los Angeles Economic Development Corp. details $280.5 million in economic output generated by the event. The study says that the first PST supported 2,490 jobs for its six-month run, with total labor income of $101.3 million. The activity was estimated to have added $19.4 million in tax revenues for state and local governments.

The report also states that 1.8 million visitors participated in exhibitions across the region.

“The primary goal of both Pacific Standard Times was, and is, to leave behind a legacy of scholarship,” Joan Weinstein, deputy director of the Getty, said in an e-mail.

“Given the ambitious scale of the exhibitions and programs, though, there are undoubtedly ripple effects in local businesses, from design firms that work with the museums to local restaurants and shops,” Weinstein added. “Although it is always difficult to measure, we hope ‘PST: LA/LA’ will generate even greater impact.”

Michael Govan, director of the Los Angeles County Museum of Art, called the previous PST a marketing tool for tourism.

“There was definitely a big benefit to L.A. in terms of visibility and cultural tourism,” he said. “There is a marketing power a collective has that no single institution can have.”

The PST initiative is sponsored by Bank of America Corp. in addition to grants from the Getty.

Raul Anaya, the bank’s L.A. market president, declined to reveal the institution’s investment in either PST festival, but said Bank of America significantly increased its investment this time around.

“We’re partners with the Getty, and our view is that the arts drive economic activity, whether its Latino art or another era of art, we would have been strong supporters,” Anaya said. “As we all know, L.A. is the epicenter of the creative economy … art is just part of that economy.”

Anaya said the bank’s primary motivation is a chance to give back to the L.A. community, but added that the sponsored VIP tours and receptions surrounding PST exhibitions can be a great way for Bank of America – or other businesses – to network with clients.

“Smart businesses should be prepared to leverage the opportunity,” he said.

Anaya also leads the bank’s Latino Leadership team, and said the theme of this year’s PST will provide a wealth of potential interactive opportunities.

There are no plans for a third edition, at this point, but both Anaya and Govan predict that another successful PST is likely to turn the initiative into an ongoing event.

Govan also hinted at the possibility of connecting a future PST effort to the 2028 Summer Olympics in Los Angeles, although he joked that the city might be on its fourth or fifth PST by then. Such a connection might be reminiscent of L.A.’s successful 1984 Olympic Arts Festival, which boosted the city’s profile as a global cultural capital, rather than just an entertainment mecca.

He points out the addition of arts institutions in Los Angeles since 1984, including Brentwood’s Getty Center and downtown’s Walt Disney Concert Hall and the Broad

“In 1984, the festival was generated out of the infrastructure of the Olympics,” Govan said. “Now, culture is growing faster than anything in L.A. It’s the leader, not an accessory.”