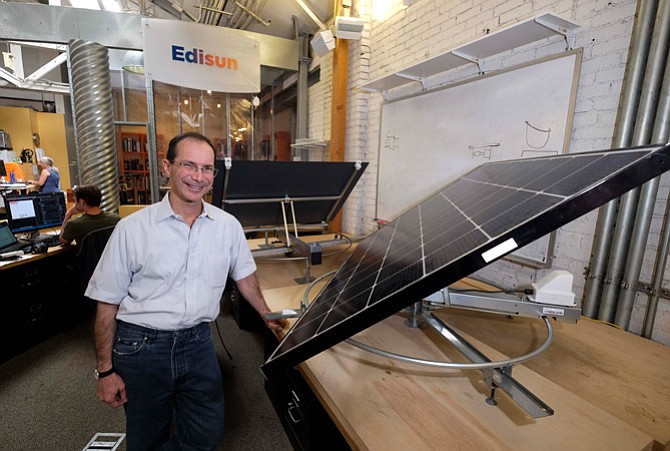 Bill Gross has been fascinated with solar power ever since his high school days in the San Fernando Valley during the oil supply crises of the 1970s.

Now Gross, the 59-year-old founder of the prolific Idealab technology incubator in Pasadena, has founded a startup, Edisun Microgrids, to capitalize on a solar power niche he hopes will transform large-scale solar rooftop projects.

The company, which is based at Idealab, has developed a dual-axis tracking device that attaches to the back of solar rooftop panels, allowing them to swivel in four directions to directly face the sun at all times. Panels that remain perpendicular to the sun can produce up to 30 percent more electricity in a given day than fixed-position panels, he said.

He said that in turn makes the economics of placing solar panels on large-scale flat rooftops more feasible. Solar rooftop panels have until now generally required some level of subsidy to pencil out, as the installation cost has generally been higher than credits from power sales back onto the grid.

“We think that this technology allows the panels to be cost-effective without subsidies,” he said.

Edisun has raised $8.5 million over the past year from individual investors and venture capitalists, and now is testing the technology with its first major installation. The devices were mounted with 2,900 solar photovoltaic panels and installed this spring on the roof of a half-million-square-foot warehouse in Oxnard occupied by Chiquita Brands International Inc., the Switzerland-based banana producer.

The installation by Edisun’s partner, West Hills Construction Inc. of Corona, was completed in June, although the two companies waited to announce their partnership until October.

Executives with the warehouse’s owner, Harry Ross Industries of Santa Monica, eagerly sought out the solar technology when they first learned of it.

“We realized that even though the tracking devices added 10 percent to the cost of each panel, because the panels will be so much more efficient, we would actually need far fewer panels than we would with conventional solar technology,” said Rob Ross, managing partner with Harry Ross Industries. “That saves us money overall.”

Ross said that while there have been no initial problems with the tracking devices, he still would like to see another three or four months of use to get an accurate gauge of just how much energy each panel is producing.

Gross said that supplying the tracking devices for the Oxnard warehouse will be a major component of Edisun’s projected revenue this year of $2.5 million. He also said that after the announcement earlier this month, interest has come in from other warehouse and industrial building owners, though that has yet to translate into orders.

Gross said he hopes the tracking devices will allow widespread installation of solar panels on millions of square feet of industrial and warehouse rooftops around Southern California and throughout the nation. He noted the tracking devices are generally incompatible with residential rooftops with their varying slopes and limited ability to support added weight.

He said Edisun, which has 14 employees, has launched a crowdfunding campaign in the hopes of raising enough money to begin to scale up production. The company is also looking into applying for grants from the California Energy Commission or other government programs.

It’s by no means certain whether the tracking devices will become ubiquitous on warehouse rooftops or will emerge as a small niche product, said Pavel Molchanov, energy analyst in the Houston office of Raymond James Financial Inc., a St. Petersburg, Fla. investment firm.

Molchanov, who is familiar with Edisun’s device, said in an email that until now, solar panel tracking technology has only been used in massive ground-level utility-scale solar panel arrays that can produce hundreds of megawatts. Sets of panels are mounted on poles anchored into the ground and then swivel to follow the sun.

“Trackers originated in utility-scale ‎projects, where energy yield is particularly critical, and now they are starting to be utilized in rooftop systems,” Molchanov said.

A key hurdle had been the added weight of the tracking devices on the roof. The massive weight of the ground-level systems would collapse the typical roof, so another way had to be found.

Gross said Edisun’s first innovation was designing a dual axis tracking system small and light enough to be mounted behind an individual solar panel. Another innovation was in the design that allows the panel to lay almost flat during periods of high wind that can damage the panels – something that fixed tilt-up panels cannot do.

Molchanov said that solar tracking devices may not be optimal for many large flat rooftops, even with such modifications.

“The additional cost must be weighed against the boost in energy yield,” which is still being tested in real world situations, he said. “Depending on the attributes of any given site, the economics will not always be worth it. Secondly, not all roofs can safely support the added weight - again, it varies from site to site.”