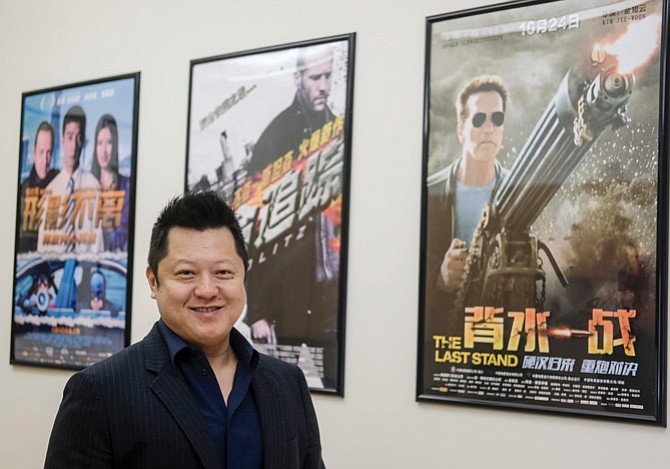 The past year brought a rash of busted deals between China and Hollywood’s entertainment industry, most recently the end of Paramount Pictures Corp. and Hua Hua Media’s $1 billion agreement that would have financed 25 percent of Paramount’s movie slate for fiscal 2018 and 2019.

But the fallout is all about movies. Entertainment industry watchers are hearing little concerning similar problems about Chinese investment in Hollywood’s TV industry.

Those in the business of facilitating Hollywood-China partnerships say that’s because so few co-production or investment deals exist between the U.S. TV industry and China, which remains a market of tantalizing potential but few small-screen links so far.

“The Chinese authorities just don’t want American television to appear in China,” said Robert Cain, a writer and president of Pacific Bridge Pictures, a co-production company located in Brentwood. “The U.S., and U.S. trade representatives, are focused more on feature films, with the MPAA (Motion Picture Association of America) being a strong lobbying organization.”

“There is not a monolithic voice that says, oh, we must not have foreign TV, but hardliners believe (foreign TV shows) are poisoning the minds of good Communists in China,” he said.

David U. Lee, founder and chief executive of Santa Monica-based Leeding Media, an aggregator of U.S. theatrical content for the Chinese market, said, despite the cancellation of a few billion-dollar deals, it remains business as usual between Hollywood and China for more modest movie financing deals. He added the number of movie co-financing deals increased for the past five or six years.

TV deals generally require less capital, but “there is not the thirst for American TV the way there is for American films,” said attorney Lindsay Conner, partner and co-chair of the Entertainment & Media Practice at Manatt, Phelps & Phillips in West L.A.

Lee, Conner, and others said TV content, particularly humor, rarely translates as well as movies to foreign markets, including China.

Hollywood dramas that are particularly heavy on U.S. culture and idioms also often miss the mark in China.

Any objections to broadcast TV content would likely increase with cable fare, much of which contains too much content that would be deemed offensive by Chinese censors.

Meanwhile, experts say that in the case of another U.S. TV staple – reality shows – it is easier for China, or any other foreign market, to license the concept of a reality competition or game show and produce that show taking into account the native language, customs and contestants of a region than it is to present the U.S. program with subtitles.

Also, very few television shows offer the action, animation, or big-budget spectacle of Hollywood movies that are most popular in China and other foreign markets. An exception is HBO’s “Game of Thrones,” with a reported budget of $10 million per episode. Since 2012 it has aired in China an edited and censored version called “Game of Power.”

Another challenge: while government censorship affects both movies and television, approval guidelines remain murkier for TV, according to Leeding Media’s Lee.

The Chinese government allows only 34 foreign films to be distributed in China each year. No such set limit exists for television programming, but Chinese censorship restrictions bring a different set of financial ramifications when it comes to TV production budgets.

Movies are approved or rejected on an individual basis, but the Chinese government must approve an entire season of episodes of a TV show before allowing any to be broadcast. That means a year’s delay in the series coming to the screen –and a year delay in producers getting paid, leaving little incentive for either side to enter into a co-production arrangement, he said.

“If the TV show is already made, and (China) licenses it, it’s clear,” Lee said. “But if you have a TV show (in development), and these days they may cost $20 or $30 million, the question becomes, how are you going to get that approval later on? You could be stuck with nothing.”

However, the attorney said such deals remain a rarity because of the differences in the way production is financed in television versus film.

“Hollywood is in greater need of capital for film production than TV production,” Conner said. “Most studios and production companies that produce television can get by based on network license fees and their own equity. Film production requires a great deal more capital, and there are no committed license fees other than foreign pre-sales.”

Despite the apparent roadblocks, some believe Chinese-U.S. TV co-ventures have a future. One of those people is “Game of Thrones” Co-Executive Producer Vince Gerardis.

Gerardis said he discussed with Lee the possibility of producing a historical series in which part of the story is set during the Mongol conquest of China, to be produced at least partly in China, opening the door to the idea of location shooting for a U.S. product.

“You get a lot more for your money,” Gerardis said. “To be able to use their production facilities and potential cast, is really exciting.

“The ultimate answer is, it’s evolving, and getting there, it’s just not there yet,” he added of the future of Chinese-U.S. co-productions. “‘Game of Thrones’ changed the landscape for television, and (may be) one of the key factors for changing the landscape in China.”