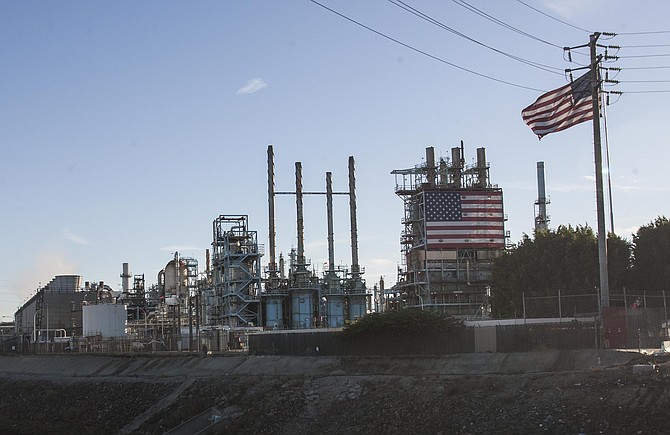 The Tesoro refinery in Carson. Photo by Ringo Chiu.

The City of Carson has stepped up a legal dispute with Tesoro Refining and Marketing Co. over the city’s approval earlier this year of a warehouse project next to Tesoro’s massive refining complex.

The city filed a cross-complaint lawsuit in Superior Court late Wednesday in response to the San Antonio oil refining company’s lawsuit filed in March against the city for approving the warehouse project proposed by Panattoni Development Co. of Newport Beach.

Panattoni has proposed developing two warehouses totaling 120,000 square feet on land it agreed in 2014 to purchase from the city’s successor entity to its former redevelopment agency. The parcel is across from the Tesoro refinery and next to an existing office park that Tesoro also owns.

Tesoro first objected to the project in a February letter to the Carson City Council, saying that truck traffic from the warehouses would interfere with access to the office park and create additional safety concerns. When the City Council approved the project anyway, Tesoro filed suit seeking to overturn the city’s approval of the project.

Carson’s countersuit alleges that by filing the lawsuit, Tesoro caused a delay in the escrow to transfer title of the site to Panattoni. The suit says the delay could result in Panattoni dropping its warehouse plans.

The countersuit seeks unspecified damages from Tesoro for the loss of economic benefits to the city should the warehouse project be dropped entirely.

Ironically, Tesoro itself has a huge project pending approval that could bring vastly greater economic benefits: a merger of two nearby but physically separate refining operations acquired from different parties over the past decade. The $460 million project would also include an expansion of refining capacity.