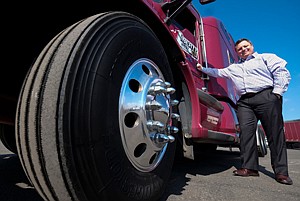 It’s not every day that a business owner backs a tax hike that could cost his company upward of $100,000 a year, but that’s precisely what Montebello truck fleet owner Greg Dubuque is willing to do if it means fixing the state’s crumbling roads and highways.

The 42-year-old president and co-owner of Liberty Linehaul West Inc. said he supports an increase of 11 cents a gallon in the excise tax on diesel fuel that Gov. Jerry Brown has proposed as part of a massive transportation finance package.

“I’m not big on raising the excise tax because of cash-flow issues, but something has to give,” said Dubuque, whose company operates a fleet of about 45 trucks that run delivery routes in California and to several Canadian cities. “Highways are our lifeblood, and we rely on the condition of our asphalt. So, I’m in support of a tax increase, as long as I can see the results.”

The tax also has the support of the California Trucking Association, which notes that poorly maintained roads and congestion can cost the industry billions of dollars a year.

For Dubuque, that has meant paying more than $30,000 annually to repair his trucks’ tires and suspension systems damaged by California roadways, he said, in addition to having to bring in extra trucks and drivers to ensure timely deliveries on increasingly congested roads and highways.

To fix that, Brown wants to raise the diesel fuel tax to 27 cents a gallon, but his is only one of several proposals circulating in the state Legislature as part of a massive package to fund transportation projects.

Two other proposals wending their way through the Legislature would go even higher. The bills are likely to be merged and then negotiations must take place with Brown over the final package.

All of the money raised through these fuel tax hikes would go toward filling a massive need for repairs and maintenance to the state’s roads, highways, and bridges.

An assessment of the repair and maintenance costs presented last year to the California Transportation Commission by the League of California Cities and various local government agencies put the total statewide price tag at nearly $107 billion, with current funding only able to meet about one-third of that cost. Los Angeles County’s price tag is “greater than $4 billion,” according to the report.

That doesn’t include tens of billions of dollars more for projects to relieve congestion in the county and throughout the state, such as the $1.6 billion widening of the 5 freeway in the southeast of the county.

The trouble is that revenue from the principal source of funding for such projects – gas and diesel fuel taxes – has been declining for years, thanks to improved fuel efficiency and a slowing in the growth in vehicle miles traveled. State officials have been struggling for years to come up with a palatable way to replace that declining revenue stream.

Trucking industry officials are generally supportive of Brown’s call for an increase in the diesel fuel excise tax, but with a major caveat: They want guarantees the funds raised will go exclusively to road, highway, and bridge projects and not be diverted to the state’s general fund or to other programs. Such diversions have happened frequently: In 2010, for example, then-Gov. Arnold Schwarzenegger’s budget raided about $1 billion in transportation funds to help close a $20 billion deficit.

“Truckers already pay nearly $2 billion a year to fund roads, much of which is currently diverted for other purposes,” said Chris Shimoda, vice president of government affairs for the Trucking Association. “We are working to ensure that any new and existing infrastructure dollars truckers pay go into road maintenance and congestion relief.”

But the state’s track record in this regard has made a skeptic of another local trucking company owner who said he doesn’t support the excise tax increase.

“That money has been diverted repeatedly – none of it has gone where it was supposed to go,” said Greg Owen, owner of Ability Tri-Modal Transportation Services Inc. in Carson.

Nonetheless, Shimoda said the need for more funding for road repair and congestion relief is acute.

He cited a report released last year by the American Transportation Research Institute on the cost of congestion to the nation’s trucking industry. California ranked third behind Florida and Texas, with a total cost in hours of delay pegged at $3.2 billion in 2014. Los Angeles County’s congestion cost to the trucking industry was nearly $650 million that year, the study says.

Montebello truck fleet owner Dubuque said the congestion costs are not just the added fuel consumption and delayed delivery times. Because his trucks spend ever-longer periods of time on the road making deliveries, he has had to add an additional truck and driver to the five already on duty in the county to ensure timely deliveries for all his clients.

Yet Dubuque said his support for a diesel tax hike has its limits.

His trucks consume roughly 25,000 gallons of gas a week, more than half of which is purchased or consumed within state limits, so an increase in the diesel fuel excise tax of 11 cents a gallon would cost him between $80,000 and $90,000 a year, he said. An alternate proposal in the Legislature that hikes the tax by 20 cents a gallon would cost his company around $150,000 annually.