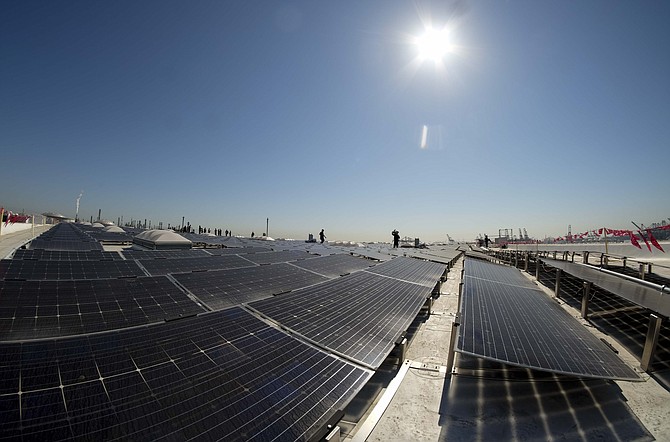 The Westmont Solar Energy Project, near the end of the 110 Freeway, includes more than 50,000 solar panels covering 50 acres of roof space, generating up to 16.4 megawatts, enough electricity to power 5,000 single family homes. It ranks second in size only to the solar project at Apple Inc.’s headquarters in Cupertino, but its electricity output makes it the world’s most powerful.

PermaCity Solar was the master developer of the project, together with building owner BlackRock and financial partners True Green Capital and GAF. PermaCity, which employs about a dozen full-time workers and had revenues of $30 million to $40 million last year, has had experience with large-scale solar rooftop projects, including one two years ago atop clothing manufacturer Forever 21’s headquarters in Lincoln Heights.

But the Westmont project dwarfs all the others.

“This really boosts our qualifications to perform the very largest jobs,” PermaCity Chief Executive Jonathan Port said. “It’s good that a company our size can compete in solar rooftop projects with the likes of Apple’s headquarters.”

The project is part of the Los Angeles Department of Water & Power’s “feed-in tariff” program, in which warehouse and other large-footprint building owners can install solar panels on the rooftop and sell the electricity generated onto the agency’s power grid. The Westmont project will produce an estimated 565 million kilowatt hours of electricity during its 20-year agreement with the DWP.

“The landowner rents out the roof and the city buys the renewable power,” Port said. “It’s a win for everybody.”

The project’s huge generating capacity of 16.4 megawatts also moves the city closer to Mayor Eric Garcetti’s stated goal of 400 megawatts of solar-generated power by the end of this year.

“We are putting sustainability at the center of everything we do in Los Angeles - and that means investing boldly to expand the use of local solar and renewable energy,” Garcetti said in a statement. “While Washington buries its head in the sand, we are carrying the fight against climate change forward in our city, and the Westmont Solar Energy Project is strong evidence of our commitment to a sustainable future.”

Unlike many other large-scale solar projects, the Westmont project is within the Los Angeles basin, meaning the power can go directly onto the grid without passing through narrow transmission corridors that are often filled to capacity, PermaCity’s Port said.