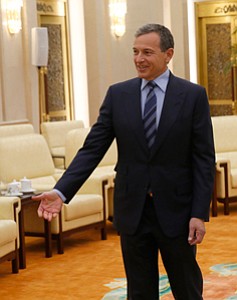 The 50 top-paid chief executives at L.A. County public companies saw a cumulative 18 percent rise in pay last year amid broad economic growth and stock market gains of 10 percent to 15 percent, according to the Business Journal’s annual list of executive compensation.

Robert Iger of Burbank-based Walt Disney Co. pulled in $43.9 million in 2016, down 2 percent from the previous year, roughly in line with a 1 percent drop in total return for company shareholders. Iger was a distant No. 2 on last year’s list behind the county’s wealthiest billionaire, Patrick Soon-Shiong, who reeled in $147 million in stock and option awards in 2015 tied to the initial public offering of his Culver City biotech company NantKwest Inc. Soon-Shiong fell completely off this year’s list as he received little in additional stock awards and options last year.

The No. 2 executive on the list, Robert Kotick, chief executive of Santa Monica-based Activision Blizzard Inc., got a 358 percent boost in compensation to $33.1 million, rising 30 spots on the list from last year.

His increase in compensation came despite a shareholder return for the company of -6.7 percent last year. Activision’s performance on other measures of corporate performance was better: a 41 percent jump in revenue thanks to its major acquisition of King Digital and an 8 percent rise in net income.

Seven of the 10 highest-paid chief executives on the Business Journal list have the greatest share of their compensation coming from these stock awards, including Robert Bradway of Thousand Oaks-based Amgen Inc., Michael Burke of Century City’s Aecom, and Arthur Coppola of Macerich Co. in Santa Monica.

“The aim is to tie executive pay to performance over a longer time frame than the next quarter or two,” said Kevin Murphy, professor of finance at USC’s Marshall School of Business. “It’s why stock awards are made today, but don’t vest for four or five years out.”

Securities and Exchange Commission reporting rules call for all of the stock grants to be recorded in the year they are awarded, even though they might not vest until future years. In Kotick’s case, nearly $25 million of his $33.1 million total company compensation is from this “booking” of stock awards in the 2016 calendar year; how much of these awards vest in future years depends on the company meeting certain earnings-per-share and operating income targets, among other criteria.

“These stock awards are only an estimate of value,” said Steven Bank, the Paul Hastings professor of business law at UCLA’s School of Law. “If you do well, you get that money; if you don’t do well, you may not get nearly as much; and if you don’t meet the minimum threshold, you get nothing.”

Some local companies, such as apparel brand Guess Inc., have also reported voluntarily in their proxy statements “realizable compensation amounts” for executive pay, which subtract out portions of stock awards that will vest in future years. These compensation totals are usually substantially lower than the totals required by the SEC.

Kotick is not likely to see a similar increase in compensation next year, and not just because the stock award was booked entirely in 2016. Activision’s board drew up a new employment agreement with him that took effect Jan. 1. The company’s proxy statement said his base salary will drop 26 percent from last year’s $2.4 million, and the compensation package will “move away from upfront equity awards to an annual grant cadence.”

The proxy said these changes were made in part to “reflect feedback from our stockholders with respect to our compensation packages.”

The average growth in pay packages – including salary, stock awards, bonuses, and other factors – outstripped the average shareholder returns of their respective companies.

Total shareholder returns for the 50 companies on the chief executive compensation list grew by 7.3 percent in 2016.

“Pay for chief executives continues to outpace everything – market returns, administrative staff pay levels, and typical employee pay,” said Rosanna Landis Weaver, an analyst and researcher at the Oakland nonprofit As You Sow, which looks at corporate accountability from a shareholder perspective.

The median pay on the chief executive list was $8.8 million, 155 times the countywide median household income of $57,000 last year, according to data from the U.S. Census Bureau.

The Business Journal focused on comparing the growth in chief executive compensation in 2016 to total shareholder returns for that same year. While there are other measures of corporate performance – including revenue growth, profitability, and return on capital investment – total shareholder return is a widely used method for determining whether shareholder investors are getting their money’s worth. Shareholders are also the most interested in seeing whether the chief executive of the company they have invested in merits the pay he or she is receiving.

The Business Journal calculated total shareholder return using the percentage change in the adjusted stock price, which factors in dividend payouts and stock splits. This was done for each of the 50 companies represented by the 50 highest-compensated chief executives to arrive at an average shareholder return figure to compare with the change in chief executive compensation.

Nonetheless, the issue of executive compensation not appearing to match company performance has caught the attention of key business groups in Washington, D.C.

“There has been a growing concern among investors and the public that pay has not always been commensurate with performance, with a perception that some executives have reaped substantial financial rewards even at times of declining stock prices and large losses to employees and shareholders,” the Business Roundtable, a Washington, D.C., association of chief executive officers of leading U.S. companies, wrote in a report. “Roundtable CEOs share that concern and believe that executive compensation should be clearly linked to company performance.”

The Business Roundtable paper also states that short-term movement in a company’s stock price, while important, should not be the primary determining performance factor. Board compensation committees should also look at cash and debt management, margins, labor and community relations, crisis response, customer satisfaction, employee development, and a host of other factors. Another important issue is consideration of performance relative to peer groups of companies.

Another factor in compensation packages is the size of the company the chief executive is running. The chief executive of a global organization such as Disney has a much bigger operation to oversee than the average CEO.

Ressler’s compensation jumped 639 percent to $32.3 million – propelling him to the No. 3 slot from No. 45 on last year’s CEO list – while compensation for Kaplan and Rosenthal leaped 865 percent, with each taking home $31.5 million, putting them way atop the list of non-CEO executive pay.

Ares shareholders did quite well in 2016 as well. with total shareholder return at 48 percent. But even that couldn’t keep up with the compensation of the company’s three top executives.

That’s because, as a private equity fund, Ares pays its executives through slices of the profits from sales of portfolio companies or other “liquidity events” involving those companies. This is reported as “carried interest” in SEC and other filings.

Private equity fund managers typically get 20 percent of the profits from these deals, with the remaining 80 percent going to other investors in the fund.

“For Ares and other private equity funds, 2016 was a very good year to be a seller,” said Lloyd Greif, chief executive at Greif & Co., a middle-market mergers and acquisitions firm and also advisory council chairman of the Lloyd Greif Center for Entrepreneurial Studies at USC. “So there were probably many more deals for Ares in 2016 than in 2015, and those deals likely reaped more profits.”

He said fund managers who receive carried interest get to pay taxes at capital gains rates, much lower than standard income tax rates. That is what has made carried interest so controversial and the subject of repeated attempts at reform in Congress.

“Every time it comes up, though, the hedge fund managers and other fund managers marshal their lobbyists and it gets defeated,” Greif said.

Of the 100 executives on both Business Journal lists, only five are women, and even that requires an asterisk. The only woman on the chief executive list – No. 45 Julia Stewart of DineEquity Inc. in Glendale – resigned from the post effective March 1 after several quarters of weak sales at the holding company’s Applebee’s restaurant chain.

The highest paid among the four women on the non-CEO list is Mary Ricks, chief executive of Kennedy Wilson Europe, a subsidiary of Beverly Hills-based Kennedy-Wilson Holdings Inc. She pulled in $14 million, thanks to an $8 million bonus and $4.1 million in stock awards.