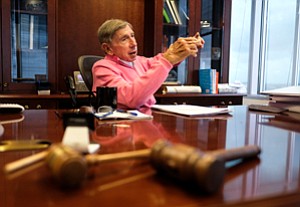 Political Positions: Mickey Kantor, who served in President Bill Clinton’s Cabinet, was reluctant to discuss the defeat of Hillary Clinton by Donald Trump in November. Photo by Ringo Chiu.

The attorney and former presidential Cabinet member sat behind his desk in the 25th-floor office of downtown’s Mayer Brown, where he is a partner, and wouldn’t budge despite several requests from a photographer to step into the hallway in search of a better angle.

“I don’t like things that are posed. Just take the picture,” Kantor barked. Though he followed up the command with an impish smile, it was clear the veteran negotiator drives a hard bargain.

Though Kantor, 77, has had arthritis for decades and suffered a seizure seven years ago that left him in an 18-day coma, his refusal to accommodate the camera had nothing to do with age or health. He was quick to bounce out of his chair and navigate the law firm’s long passageways to track down parking validation for a guest.

Kantor served first as a United States trade representative under President Bill Clinton, a tenure that included negotiating parts of the controversial North American Free Trade Agreement, before becoming secretary of commerce after then-Secretary Ron Brown died in a plane crash in 1996.

Brown’s death was not the first time Kantor’s life was changed by a plane crash: His first wife, Valerie Woods Kantor, died in a commercial airline crash in San Diego in 1978. His teenage son also lost his life in a car accident 10 years later. Kantor has been married to broadcast journalist Heidi Schulman since 1982.

“Everybody has tragedy ... everybody has challenges,” he said. “If you say someone had a perfect life, it’s not true. But I’m constantly grateful for all I’ve been allowed to do.”

Kantor, who joined Mayer Brown in 1997, was a name partner at West L.A.’s Manatt Phelps Phillips & Kantor between 1975 and 1993, when he left to work for the Clinton administration. The Nashville, Tenn., native also served as chairman for Bill Clinton’s first presidential campaign.

Though he ran her husband’s campaign, Kantor was not involved in Hillary Clinton’s 2016 presidential run.

“When I’m in politics, and I’ve shared or run 18 campaigns in my life, I’m in it seven days a week,” he said. “I don’t think you can do politics, at least in the roles that I’ve played, some in and some out. That’s just my personality. It’s probably a dumb thing.”

He also stood back from commenting too much about the election, except to call the result disappointing.

“I think the country is going to have to take a collective deep breath, and hold it for four years,” he said, noting the incessant political dialogue has served as a distraction from what he considers to be more important issues.

“We are all focused in a way that is not helpful, on a constant basis, on what’s going on in Washington,” he said.

The debate surrounding Nafta was reignited during the campaign after criticism from then-Republican candidate Donald Trump, who has called it “the worst trade deal ever.” Trump has continued bashing the deal since becoming president, with his administration notifying Congress last month of its intent to renegotiate the agreement.

While resistant to discuss November’s election at his office, he did speak about trade policy in a March keynote speech at UCLA’s Journal of International Law and Foreign Affairs Symposium. Quoted in a university publication, Kantor criticized Trump’s talk of renegotiating standing trade deals such as Nafta, saying “It is absolutely fine to update a 24-year-old trade agreement, but to ‘renegotiate’ is hostile.’”

These days, Kantor calls his corporate law practice “eclectic.” Still active on behalf of clients, he has chosen to pursue his public service work through a variety of nonprofits, including LA Conservation Corps, a youth development organization he founded 31 years ago. Along with his law practice, he serves as chairman of Lexmark International Inc. The Lexington, Ky., company, which produces laser and digital printers, was sold to a Chinese-led investment group for $2.54 billion last year.

He’s also co-chairman of Vision to Learn, a nonprofit that provides underserved children with free eye exams and glasses by bringing mobile clinics to schools, and neighborhood youth and community organizations.

His eyes light up at the mention of the program, founded and co-chaired by Kantor’s friend, Austin Beutner, a former investment banker who went on to serve as deputy mayor of Los Angeles and later, briefly, as publisher of the Los Angeles Times.

Kantor said the 5-year-old nonprofit, which has spread to seven states, has given away more than 60,000 pairs of glasses, often in partnership with state medical insurance programs. It also receives private donations and includes among its many partners the L.A. Clippers Foundation and Los Angeles Dodgers Foundation. He said frames with team logos and colors go a long way toward persuading young boys that wearing glasses isn’t just for nerds.

“What we have found in our public schools, in the United States, grades one to five, there are kids that can’t even see the board, or read a book, because they have no access to optometrists, opticians, and clinics in their areas,” he said. “The schools don’t provide that. It’s not a criticism, they just don’t.”

Vision to Learn marks Kantor’s second board position with Beutner. The pair co-chaired the Los Angeles 2020 Commission, which presented recommendations for the city’s future. Beutner recalled that Kantor was always ready to roll up his sleeves.

“Mickey is one of those people who does not need an opinion poll to know what’s right,” he said. “He knows what’s right and will work tirelessly toward it.”

Despite Kantor’s numerous accomplishments, longtime friend and fellow attorney Geoffrey Cowan, former dean of USC’s Annenberg School of Communication and Journalism and head of the Voice of America in the Clinton administration, described him as “bizarrely modest.”

Owing to that characterization, Beutner noted that Kantor’s home and office remain conspicuously free of trophies, plaques, and photos of Kantor with the many world leaders who have shaken his hand.

Cowan said Kantor’s commitment to public service was shaped by his childhood. His father was involved in local politics and served on the school board, calling for desegregation of the public schools in 1954.

“His father fought for integration when it was not a popular thing,” Cowan said. As a result, he added, Kantor became a lifelong advocate for the little guy. “His most important values are things that are important to people who are less fortunate.”

A more competitive side of Kantor comes out on the golf course.

Although he took up the sport a few years ago, Beutner said Kantor’s drive to win became evident when he took two of his sons out for a game with the attorney. By the end of the round, Beutner said his kids had learned a few choice new words when the competition failed to go Kantor’s way.

“He is one of the most competitive people I’ve ever met,” Beutner noted.

The pair’s Los Angeles 2020 Commission Report, issued in 2014, received flak in the press for presenting a bleak view of a city it described as in crisis. Kantor presents a much rosier view of the City of Angels these days, though he noted education remains a pressing issue.

“L.A. is having its moment, which I think makes all of us feel good,” said Kantor, observing an expanding downtown through his high-rise office windows.

“A lot of investment has come in, downtown has been revitalized over the last number of years, public safety is under control – although crime went up a little bit last year, it’s gone down much more,” Kantor said. “I think we all ought to be proud of that.”

Indeed, the transplanted Angeleno said he now would not live anywhere else. “Who could not love the diversity of Los Angeles, the most diverse city in the world?” he asked. “You look around our streets and it’s every complexion, every background, every nationality you can think of. I wish our president would come to this city and see how people are living together.

“I’ve always thought of L.A. as the closest thing we have in America to a democracy.”