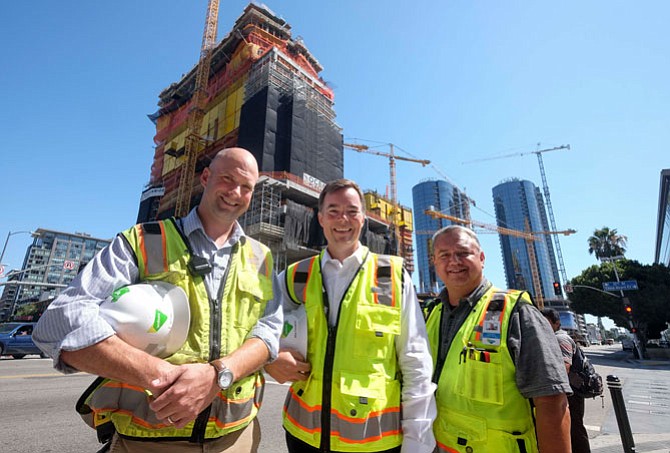 Construction contractors are enjoying boom times as L.A. continues on its strongest development cycle in more than a decade.

Total Los Angeles County billings for the 45 largest construction general contractors at work here rose 15 percent last year to $8.5 billion compared with 2015, according to data compiled for the Business Journal’s annual list of contractors. That was on top of a 35 percent increase from 2014 to 2015.

Downtown’s renaissance, a robust tech and entertainment economy, demand for multifamily housing and a confluence of major infrastructure projects have been the main factors driving these billing increases.

Lendlease debuted on the list this year at No. 6 with $386 million in 2016 billings – the ranking criterion for the list – as the company began reaping the rewards of committing more personnel and resources to the L.A. market in 2013 and 2014, while the recovery gained steam.

Lendlease has three huge mixed-use projects in the works in downtown alone: the $1 billion-plus, triple-tower Oceanwide Plaza project by Shanghai-based Oceanwide Co.; the neighboring $500 million twin-tower Circa project by Koreatown-based Jamison Properties and Hankey Investment Co. in Park Mile; and the single tower at 1133 S. Hope St. by Full Star Properties based in Foster City.

The new No. 1 on the list as ranked by county billings: Turner Construction Co. of New York, which moved up from No. 5 last year as its local work nearly doubled to $616 million. About 40 percent of those billings came from one project: Korean Air Lines’ Wilshire Grand Center that was completed last month.

Look for Turner to be in the upper reaches of the annual lists for the next few years – other major projects for the firm include the Los Angeles Rams football stadium in Inglewood and the northern half of the midfield satellite concourse terminal at Los Angeles International Airport.

The $2.6 billion stadium project suffered a setback this year when heavy rains resulted in a couple of months of delays, pushing back the completion date to 2020 from 2019. When it opens in late summer of 2020, the stadium will host both the Rams and the Chargers, which are relocating from San Diego.

Nonetheless, Kevin Dow, L.A. general manager for Turner, said he expects the stadium project will bring in $350 million for his company this year alone. That’s just part of a construction backlog of $2.9 billion for the local office as of the beginning of this year.

“We see at least two more years of robust activity in this market,” Dow said.

All of the activity does have its downside for construction companies: rising costs for labor and some materials. The annual percentage increases have generally ranged in the upper single digits, well ahead of the general rate of inflation, which is running about 2 percent.

“The market is definitely stressed in terms of workforce and materials,” Dow said.

The biggest impact of the tight labor and materials markets so far has been in construction companies deciding to pass up additional work for fear of not being able to secure all of the materials necessary.

“We are definitely more selective in the projects we take on now because of the limited resources,” Lendlease’s Concannon said. “Our greatest constraint now is not opportunities but resources.”

Some of the effect might already be showing up in the contractor billings numbers for the county. The 15 percent growth in 2016 billings was down from the 2015 billings, which jumped year to year by more than a third.

“That 35 percent growth rate was a blistering pace that probably couldn’t be sustained,” said Jerry Nicklesburg, director of the UCLA Anderson Forecast.

But he said he expects construction billings growth to continue for a couple of more years, if not longer.

“The underlying strengths are still there: The tech/entertainment sector is still expanding and the growth downtown shows little sign of abating,” Nicklesburg said.

Even if the private-sector activity slows a bit, there is plenty of public-sector infrastructure work in the years ahead, thanks to voter approval in the fall of Measure M, a half-cent sales tax increase expected to generate roughly $3 billion a year for transit projects over the next 40 years.

Not everyone posted gains, however.

Walsh Group fell from the top of the list to No. 5 this year, as both billings and backlog fell for the Chicago-based contractor.

The company finished work on the Clark Library at UCLA last year and finished the $313 million San Gabriel Trench grade separation project last week. That leaves Walsh’s share of work on the $1.3 billion Crenshaw-LAX Transit Corridor as its only major transportation project under construction.