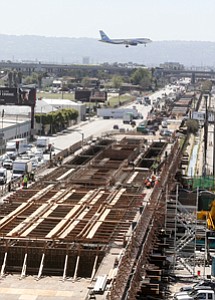 The likely prospect of Los Angeles being awarded the Summer Olympic Games next decade has helped spur local infrastructure projects onto the fast track, with new targeted completion dates years ahead of original plans.

Dozens of others could get a boost as well, and local construction, engineering and design companies are lining up in hopes of scoring lucrative contracts.

Among the projects already in progress are the Purple Line subway through Westwood, which would host the Olympic village at UCLA, and a multibillion-dollar modernization of Los Angeles International Airport, the gateway for international delegations of athletes and officials. Other projects that were once on the drawing board for the distant future, such as light-rail lines through the Sepulveda Pass and southeastern Los Angeles County, are now moving front and center.

Millions of people, both locals and visitors, are expected to attend Olympic events if Los Angeles wins its bid. With venues as far afield as downtown, Long Beach and Lake Perris in Riverside County, government officials in the already gridlock-ridden urban area are expecting public transportation to be key.

“Many of these projects were already in the hopper, and a few might have been fast-tracked,” said Kelli Bernard, chief executive of the L.A. metro/design and consulting services group for Aecom, a Century City engineering and design giant that has submitted several proposals. “But it’s the Olympic bid that has added another sense of urgency, to focus on completing many of these projects ahead of schedule.”

Voter approval in the fall of a half-cent sales tax increase known as Measure M would help foot the bill for many of the fast-tracked projects. The increase is expected to raise about $3 billion a year, providing the financial ability for transportation officials to fast-track many projects by allowing more financing upfront, to be repaid over time with sales tax dollars.

The pressure to fast-track transportation projects picked up a notch in February when Los Angeles and Paris emerged as the only two cities still in the bidding to host the 2024 Summer Games. That’s when plans gelled to fast-track the Purple Line extension through Westwood and an expansive rail station to connect the Crenshaw-LAX light-rail line to a people-mover system at LAX.

After a call from Los Angeles County Metropolitan Transportation Authority Chief Executive Phillip Washington for accelerating projects through public-private partnerships, dozens of proposals came in, including five from Aecom.

The company proposed fast-tracking five light-rail projects around the county, using the private sector to finance and manage the projects. It suggested having private-sector contractors work on the approval, design and construction phases concurrently, instead of sequentially as is now usually the case, which could shave years and hundreds of millions of dollars off projects.

The company has also submitted a formal proposal with joint-venture partner Kiewit Infrastructure for a public-private partnership on one of those projects, a 20-mile light-rail project from downtown’s Union Station to Artesia. Metro has said it is examining the project.

Several proposals also addressed mass-transit options for the highly congested Sepulveda Pass connecting the Westside with the San Fernando Valley; Metro is giving serious consideration to at least two of those from Parsons Transportation Group and Cintra US Services.

Recent developments are pointing increasingly oward the International Olympic Committee awarding Paris the 2024 games and Los Angeles the 2028 games; the IOC will make its final decision in Lima, Peru, in September.

If that schedule proves to be the case, several projects are still expected to be accelerated, though with perhaps a bit more leeway for delays. With a full decade to work with, other projects might also come forward for fast-tracking.

One local transportation analyst, though, said he is dismayed that most of the projects that have been proposed for fast-tracking are rail projects.

“It makes me nervous to see all this acceleration of rail projects,” said James Moore, professor and director of the transportation engineering program at USC’s Viterbi School of Engineering. “If that happens without concurrent investment in the bus system, then overall transit ridership will continue to drop. With this influx of Measure M funds, we should not destroy opportunities to expand transit services for all classes. Just making sure that people can be moved to and from Olympic events seems pretty far down the list of priorities.”

Metro has already fast-tracked one high-profile project: the completion of the Purple Line subway through Westwood. This 2.6-mile extension from Century City to the Veterans Affairs Hospital property – estimated to cost $2.6 billion – was originally slated for completion in 2035, with construction not scheduled to begin until an extension to Century City now in preliminary construction phase was to have been mostly finished.

But Metro’s Washington announced plans this year to build both extensions simultaneously with a completion date for both of 2024, just in time for the Summer Olympics.

There’s only one catch: So far, there are no federal funds for the subway extension through Westwood.

Just before President Barack Obama left office in January, his administration announced $1.6 billion to fund the second phase of the subway extension to Century City. Metro has applied for $1.1 billion in federal funding for the final phase through Westwood, but there has been no word from the administration of President Donald Trump on when – or if – funding will be awarded.

Also being fast-tracked is a $350 million station at Aviation Boulevard and 96th Street near LAX to connect Metro’s Crenshaw-LAX light-rail line now under construction to a planned automated people mover that would whisk travelers to terminals at LAX. The project’s completion date has been moved up to 2024 from 2028.

A few years ago, just as talk was beginning about a possible L.A. Olympic bid in 2024, Los Angeles World Airport officials accelerated the completion time lines for the $1.5 billion people-mover project itself and a $950 million consolidated car rental facility at the eastern end of the people-mover route; the opening dates were moved up to 2023 from about 2028.

Airport officials have also made sure that a host of other improvements to the airport terminals, the airfield and other access routes to the airport are completed in time for the Olympics.

These include billions of dollars in renovations of every existing terminal, building a new terminal on the airfield next to the Tom Bradley International Terminal, and various improvements on and off the airfield. Most of the funds for these projects are coming from the airlines using the airport; they in turn pass on the costs to ticketed passengers.

Board of Airport Commissioners President Sean Burton – who is also chief executive of L.A. development company CityView – said the Olympic bid has played a crucial role in accelerating some projects and making sure the rest stay on track.

“This entire upgrade has been a long time coming and was going to come into fruition regardless of the Olympic bid,” Burton said in an email. “However, certain projects have been accelerated as a result of the Olympics. For example, the Automated People Mover as well as the (consolidated) rental car facility and all terminal upgrades will be finished by the end of 2023 to be ready to welcome the world to the Olympics. Athletes and spectators will be able to experience a modern airport that we’re proud of when they visit Los Angeles.”