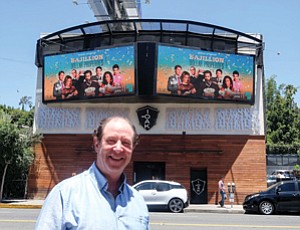 Signing On for Work: Ruben Cielak of digital sign business Tako Tyko in front of a customer’s business in West Hollywood. Cielak said the city of L.A.’s current regulations for on-site digital signs make it hard to line up customers in that city. Photo by Ringo Chiu.

Local sign installers are breathing a sigh of relief after city of L.A. officials recently proposed regulating, but not banning, digital storefront signage.

The proposed rules would restrict the placement, size and brightness of digital on-site signs, such as those used by gas stations, theaters and auto dealers. But they stop well short of a ban sought by opponents and even city officials a few years ago.

“We were looking at an almost complete ban of on-premise digital signs, and that would have decimated my member sign installers and manufacturers,” said Roy Flahive, executive director of the California Sign Association, a trade group in Poway. “These new regulations, although not what we would have wanted ideally, at least we can live with, so we’re supporting them.”

The regulations are still in an early phase.

The Los Angeles City Council’s planning and land-use management committee released them on May 31 and then promptly sent them to staff for review with the aim of developing more detailed regulations. The rules next have to come back to the council for hearings and a vote; no time line has been specified, but the council probably won’t see a finished package until sometime next year.

The city currently considers the signs on a case-by-case basis, often deciding because of their proximity to homes or other sensitive areas not to allow them.

One local digital sign installer is eager for regulations to be put in place so that there can be clear guidelines for him to present to potential customers.

“Right now, even though digital signs are supposedly allowed, in many cases when (business) customers in Los Angeles have approached us about putting up signs, the city has not allowed them,” said Ruben Cielak, president of Tako Tyko, a sign company based in Mid-City. “If we can get these regulations approved, then we’ll know exactly what the rules are and that should allow us to sign up more customers.”

The cost of digital signs also has limited their use.

A 60-square-foot digital sign could cost in the low six figures to install until about three or four years ago, way beyond the means of most businesses in the city. Digital signs have largely been limited to movie theater chains, gas stations and other businesses where listings or prices change constantly.

One of the few other businesses using digital signs is Walgreens Boots Alliance Inc. of Deerfield, Ill., which has a national policy of using small digital signs at most of its drugstores to advertise specials on products.

Digital sign prices have come down in the last couple of years, but such signs haven’t proliferated widely.

They have gotten swept up in the controversy over digital billboards and the intense pressure from anti-billboard activists and community (see sidebar, this page).

“New digital signage on storefronts would radically alter community character in many neighborhoods,” wrote Frank, who couldn’t be reached for comment.

Los Angeles Mayor Eric Garcetti and other city officials a couple of years back floated the idea of banning on-site digital signs in most areas of the city, except for a few special districts. The move prompted a fierce lobbying effort by the California Sign Association and the International Sign Association of Alexandria, Va., to prevent a ban from taking effect.

The latest proposals from the council’s planning and land-use management committee take a more measured approach.

“We are looking to establish a set of clear, objective rules that strike a balance between the needs of businesses and preservation of the city’s visual landscape while taking into account sensitive uses such as residential open space,” Mitch Englander, one of five council members on the planning and land-use management committee, said in an email.

Among the other restrictions in the proposed regulations: Digital on-site signs must be at least 100 feet from residential neighborhoods and at least 100 feet away from the nearest digital sign. Other provisions include that no individual digital on-site sign may exceed 300 square feet and the displays on the digital signs cannot change more rapidly than once every eight seconds.