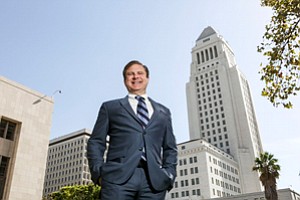 Los Angeles City Controller Ron Galperin took office three years ago pledging to open up city data and make government run more like a business. Galperin, 53, previously served as chairman of the Los Angeles Commission on Revenue Efficiency, served as an officer of his local neighborhood council, was a private attorney, and briefly was a reporter and researcher with the Business Journal. Galperin spoke with the Business Journal about his efforts to make the city more accessible to businesses.

What have you done to make the city of L.A.’s government more friendly to businesses?

It’s not enough to be business friendly, but you also must be business focused. In the audits we do, we look at the problems, solutions, and opportunities for the city through a business lens. Take the operations of Department of Water & Power, which affects every business in the city large and small. Our audits of the DWP are designed to make sure ratepayers are protected and ratepayer funds put to the best use.

You have put a lot of effort into putting all of the city’s financial data and economic data online in mind-numbing detail. Why?

We’ve created an online one-stop shop for permits, development, employment, wages, and much more. We also have put a virtual checkbook of the city online, which had never been done before, every single good or service that we purchase. Putting this online has been a game-changer.

It’s a tremendously valuable resource to residents and businesses. One of the reasons I put up every item that we buy: It gives an opportunity for businesses to see who is selling to us, what we are buying, and how much we are paying for it. That’s a great opportunity to encourage local procurement wherever possible. For example, I was talking about this with a manufacturer and invited him to go online and see what the city buys that he makes. We saw what he sold through distributors – he didn’t even realize his distributors were selling to the city. Any business can take this information and use it to boost their own sales.

What have you done to ensure that small businesses get a fair shake in bidding for city contracts?

We did an audit of contracting practices at Los Angeles World Airports. We looked at contracts that were only getting one bid and only two bids – many more than we expected. It tells us there’s not been nearly enough outreach to small, minority, and women-owned businesses.

What have you done to control one of the costliest aspects of L.A. government: legal settlements?

Risk mitigation is vital. The city is a large organization that can be an attractive target for lawsuits. On liabilities resulting from injuries to city employees, we’ve done audits for better claims processing, better training of employees, better availability of care. The goal has been to reduce the injuries in the first place, by looking at those that were most preventable.

As for lawsuits brought by residents, businesses, and organizations, the key is also prevention through better maintenance of streets, sidewalks, parks, etc. We’ve already audited the condition of our streets and now we’re auditing the condition of city parks.

What is the most surprising thing that you’ve learned since taking office?

I had not been in the “belly of the beast” before. Yes, I knew that bureaucracy is often overwhelming, but when you live with it on a daily basis, that’s when it gets the most frustrating.