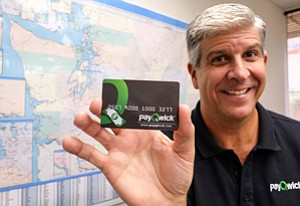 Card-Carrying Pioneer: Ken Berke at the Calabasas office of PayQwick, which works with pot clients in Washington state. Photo by Ringo Chiu.

Despite its growing acceptance as an above-board industry, marijuana-related businesses have almost completely failed to make inroads with financial institutions fearing loss of federal insurance on their deposits.

PayQwick, a Calabasas-based payment processing and compliance firm, is trying to fill this hole in the market by aiding cannabis companies in compliance with state and local laws that have been forced to act as cash operations.

The company currently operates solely in Washington state, where recreational marijuana is legal and controlled by a system that tracks plants from seed to sale. Despite fears about federal banking regulations, the company has been able to partner with several small credit unions and banks in that state to set up accounts for cannabis businesses. Once PayQwick identifies a lender and sets up an account for its client, it then processes all payments through a platform that ensures federal guidelines and state laws are met, acting as a fail-safe service for both the bank and client. And the company has begun to identify L.A. lenders that it could work with going forward.

While many banks have been reluctant to open accounts for cannabis businesses – even legal medical marijuana dispensaries – in Los Angeles and throughout the country due to the plant’s federal classification as an illegal drug, that concern could be short-lived.

“Reputational risk and the stigma attached to cannabis is waning fast,” said PayQwick Chief Executive Ken Berke, the former managing partner of Berke Miller Law Group in Calabasas. “I don’t think big banks or even regional banks are going to open accounts yet, but smaller, local ones are.”

The service could be coming to Los Angeles as soon as March, when the city will have at least one measure on the ballot that mandates a tracking system for legal cannabis from seed to sale. This provision would allow PayQwick to guarantee that money flowing into accounts complies with federal guidance from the Department of Justice and Financial Crimes Enforcement Network, which states that prosecutors will not go after operations abiding by state and local regulations.

The company also processes transactions among cultivators, distributors, retailers, and consumers, ensuring that no black-market product enters the supply chain. Transactions processed by PayQwick are subject to a 1 percent to 1.5 percent fee, although Berke said that percentage is negotiable depending on volume.

Berke’s entrance into the cannabis economy came after a long career as a transactional attorney, working both in private practice and in-house for aerospace giant AlliedSignal Inc. (now Honeywell International Inc.). Always entrepreneurial, he noticed the massive disparity between the demand for financial services from marijuana businesses had and the supply available to them.

“About four years ago, I began looking into medical marijuana and it became apparent quickly that its biggest need was for cash management and banking,” he said.

Around the same time, Washington state had just legalized recreational cannabis and Berke had an epiphany while poring over the state’s new laws.

“I was reading over the Washington statute and a light bulb went off,” he said. “I realized that if they could trace the seed to sale why couldn’t we trace the money backwards.”

The revelation gave birth to PayQwick, which entered the Washington market last year after meeting with state banking regulators and being introduced to several financial institutions there. The company’s approach is simple, Berke said.

“Our pitch to banks is: Our compliance program enables legal, bankable marijuana commerce,” he said.

PayQwick’s initial success in Washington has it looking at other markets in addition to California. The company is eyeing Colorado, although the state’s muddled start to legal recreational sales has caused some pause, and it’s submitting a bid in December to run Ohio’s proposed closed-loop marijuana banking system.

While Berke did not disclose revenue numbers, he said PayQwick has closed a convertible note round of financing and is trying to raise an additional $1.3 million in a Series A round. The company employs 15 people.

Demand for the services offered by PayQwick is strong. Owners of marijuana-related businesses routinely share horror stories about operating in an almost strictly cash-based system.

Jerred Kiloh, who owns the Higher Path medical marijuana dispensary in Sherman Oaks and is president of L.A. cannabis industry group UCBA Trade Association, said that while robbery is always a risk, it’s the smaller indignities that irk him the most.

“Even though I pay my taxes and am compliant with all regulations, I feel like I’m not a good actor in my own economy,” Kiloh said. “As a dispensary owner for 17 years, I’ve definitely had to buy cars with huge piles of cash – my ATM is a shovel and some Pelican suitcases buried in the backyard.”

Regardless of what type of regulations are adopted by the city of Los Angeles and other local municipalities, and whether or not Proposition 64 passes on Nov. 8, PayQwick will soon expand its operations to California and Los Angeles. That’s because new statewide regulations are set to come on line in 2018 that mandate cannabis businesses employ a seed-to-sale tracking system, mirroring Washington’s system.

The banking issue stems from marijuana’s continued classification as a Schedule I drug, the same grouping as heroin and LSD, at the federal level. As such, any money made through the sale of cannabis could be subject to money-laundering provisions of the Bank Secrecy Act meant to stem the flow of illicit drug money through U.S. financial institutions. Banks are required to report any transaction they believe is tied to drugs – including cannabis – or risk losing protection from the Federal Deposit Insurance Corp.

But guidance issued by Deputy Attorney General James Cole in 2013 has muddled those absolutes, opening a door for PayQwick’s offerings. The so-called Cole memo made clear that federal prosecutors would not target marijuana offenders if they were in compliance with state and local regulations, focusing department resources instead on bad actors.

According to Berke, the few banks that do business with marijuana operations can charge up to $14,000 a month for an account in Colorado, although that number drops much lower when a seed-to-sale program, such as the one in Washington, is in place.

“Banks are charging around $150 a month in Washington for a business that has a PayQwick account and $450 for ones that don’t,” Berke said.

Several Washington lenders working with PayQwick were scrutinized by federal regulators in December and walked away without any penalties or compliance citations.

Some marijuana business in California could opt to bite at higher prices now due to the risks associated with running all-cash operations. Dispensary operators such as Kiloh said the risk of holding piles of cash is a nightmare, making the payment of employees, ancillary vendors, and taxes burdensome. While he noted that workarounds can be found – such as the occasional bank manager looking the other way – Kiloh said those arrangements are not ideal.

“The industry has always found ways to get access to bank accounts,” he said. “But why should we have to do it in underhanded ways?”