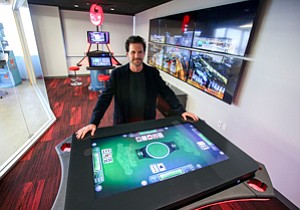 The long-running battle between local card rooms and tribal gaming casinos has a new skirmish line: a change in an obscure state rule that could cost the local card rooms millions of dollars in revenue each year.

Card clubs are able to flourish in California because gamblers play against each other, not the “house,” with players supposed to alternate as the “bank” over the course of a game. But the state Bureau of Gambling Control has mandated that starting next year card room operators must ensure that the banker position actually is rotated – or the game must be halted for two minutes each hour. This is a marked change that could upend the tradition of independent bankers in card games such as blackjack and baccarat.

While the rule change might sound minor, it could have major consequences for the biggest card rooms in Los Angeles County, including Commerce Casino, Gardens Casino in Hawaiian Gardens, Bicycle Club Casino in Bell Gardens, and Hollywood Park Casino in Inglewood. That’s because the rule change could dramatically slow the pace of – or even disrupt entirely – lucrative games that make up the bulk of casino revenue.

“This is something we have to do, but we’re not at all happy about it,” said Haig Papaian, chief executive of Commerce Casino.

He said revenue from gaming tables with bankers could drop by as much as one-third and that he expects total revenue to drop by about $8 million a year under the rule.

The change hits at the heart of fast-paced card games such as blackjack and baccarat that involve bankers. Having a banker employed by the card room at the tables is considered Las Vegas-style gambling and is illegal in California. But thanks to a flexible interpretation by the bureau a decade ago, independent bankers were allowed – as long as the banker position was offered to other players at each gaming table.

That spawned the now-widespread practice among card rooms of signing contracts with third-party companies to supply professional card game bankers to their tables. These professional bankers are expert in keeping the pace of card games moving, and they usually cover the bets or wagers of players in each round. As a result, these card game tables have turned into huge moneymakers for both the casinos and the third-party banks.

At Commerce Casino, for example, these banked games bring in roughly two-thirds of total revenue.

This has not sat well with Indian tribal gaming groups, who claim these banked games are in essence house-banked games because they fail to ensure rotation of the banker position. And this, they say, violates the state Constitution and treads on their exclusive right to offer some house-banked card games.

“These are pseudo house-banked games that are competing with tribal government casinos,” said Dave Palermo, who has written several books on the California gaming industry and has advocated on behalf of tribal gaming organizations.

Tribal groups spent four years trying to get the state bureau to enforce a law already on the books requiring that the banker position be continually rotated among players.

“We believe California law requires the continuous and systematic rotation of the bank, not the (mere) offer to rotate the bank,” the Yocha Dehe Tribal Gaming Agency wrote to the bureau in October 2012. The tribe’s casino is near Sacramento. “The failure to rotate the bank means the games played at the cardrooms are prohibited by the California Constitution, the Penal Code, and violate tribal exclusivity.”

This year, the tribal gaming groups finally succeeded. Card room operators now have until the end of September to submit plans to the bureau on how they intend to enforce the mandatory rotation of the banker position starting Jan. 1.

Papaian and his casino manager, Jeff Harris, said the rule change would hit in several ways at the heart of the fast-paced banked card games. First, players who must take on the mantle of banker from the contracted professionals will likely operate more slowly. Also, because the player-bankers usually bet just the minimum to cover themselves, other players who fear their losses might not be covered by the banker might not wager as much or might leave the game altogether.

And then there’s the two-minute stop in the action that must occur if the banker position is not rotated at least once every hour. While some players might use the opportunity for a bathroom break, card room operators fear that others will simply wander off from the game.

“We’re concerned that if the forced two-minute break does have to happen, people would decide they’ve had enough and choose not to come back to the table,” said Kyle Kirkland, president of the California Gaming Association in Sacramento. Kirkland owns two card rooms, one in Fresno and the other in Visalia.

He said there’s an even greater concern: If customers who love games such as baccarat and blackjack don’t want to be the banker or feel uncomfortable with other nonprofessionals being the banker, they may stay away from the card rooms and go to nearby tribal gaming casinos.

“This runs the risk of customers not coming back in the future,” Kirkland said.

Back at Commerce Casino, Papaian and Harris estimated that the new rule could cost an average of $10 a table every hour, with some tables experiencing hourly revenue losses as high as $16. That might not sound like much, but multiply the $10-an-hour average by 96 tables operating 24 hours a day seven days a week, and that could add up to more than $8 million in lost revenue each year.

Another local card room operator said he, too, expects the new rule to cost his card room revenue. Deven Kumar, general manager of the Hollywood Park Casino in Inglewood, said his staff is still trying to figure out just how much revenue could be lost and to come up with strategies to minimize that drop.

Not all local card room operators are so gloomy about the new rule, however.

Ron Sarabi, general manager for the Gardens Casino in Hawaiian Gardens, said he believes that after a rough year or two as customers adapt to the new rule, revenue will rebound. Once customers realize they might only have to serve one card game round as the banker each hour, they will likely be more willing to remain in the games.

“Sure, there will be a hit to our revenues – maybe 10 percent or even more – during the first year or two,” Sarabi said. “But we intend to educate our customers on this rule and on the responsibilities of the banker position. And we hope that with that education behind them, the customers will adapt.”