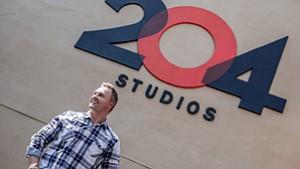 Next Stage?: Alton Butler, owner of Hollywood production studio Line 204, said he would have to rely less on freelancers if a proposed California measure passes. Photo by Courtesy Photo

It’s shaping up to be one of the major battles between business and labor in Sacramento this year: a bill to allow workers in the so-called “gig economy” to form unionlike organizations.

The 1099 Self-Organizing Act by Assemblywoman Lorena Gonzalez, D-San Diego, seeks to amend state labor law to allow 10 or more independent contractors working for a “hosting platform” such as Uber and Lyft – as well as other employers – to join in unionlike groups and negotiate wages and other workplace protections.

The aim, Gonzalez said, is to give independent contractors greater leverage to boost their wages and improve working conditions.

“For the first time in history, these independent contractors could organize themselves into small or large groups and negotiate with their employer over working conditions, wages, health care, and even retirement,” she said.

But opponents say the bill threatens to upend the so-called “sharing economy” as well as long-established working relationships in other sectors of the local economy, such as entertainment, logistics, and manufacturing.

“For gig economy platforms and other companies that use independent contractors, the big appeal for workers is the flexibility to work when and how they want,” said Robert Callahan, director of policy of the California chapter of the Internet Association, a Washington, D.C., advocacy group for companies with Internet-based business platforms. “This bill could destroy all that. Workers would lose and companies would lose.”

One local entertainment industry executive who has used independent contractors in the past said that if this bill passes, he wouldn’t use the model going forward.

Alton Butler, owner of Line 204, a Hollywood company that offers soundstage space and equipment to film and TV production companies, said he made extensive use of independent contractors in the past when he had a related motor-home rental business and had to hire drivers. He sold that business a few years back and now uses fewer than 10 independent contractors at any one time.

But with the freelance/independent contractor model so common in the entertainment industry, he wants the flexibility to hire them as needed. This bill, he said, would take away that option by raising the specter of having to negotiate fixed wages and working conditions.

“It would prevent me from using 1099 forms in the future,” Butler said. “Everybody would have to be under our roof and under (a full-employment) contract. We would have to hire only full-time workers.”

Gonzalez introduced her bill in December and aimed it specifically at companies that use Internet-based business platforms, most notably Uber and Lyft, whose customers use apps to summon drivers. The bill was drawn up in response to complaints about falling wage payments from some drivers for those companies.

Locally, several other businesses use hosting platforms or apps, including Washio, an L.A. laundry pickup service, and DogVacay of Santa Monica, an online marketplace where dog owners can hire sitters.

The bill was designed to fill a gap that has emerged in labor law as hosting platform companies have multiplied. Such companies have thrived on a business model of workers checking in for work on their own schedules; but in exchange for that freedom, they are treated as independent contractors, responsible for their own benefits and without taxes withheld from their paychecks. Federal labor law does not explicitly give workers not classified as employees the right to collectively bargain for wages and working conditions.

On March 9, Gonzalez expanded the bill to include all companies that use independent contractors and renamed it accordingly. The bill, which is set for its first Assembly committee hearing on April 20, now takes in huge swaths of traditional industries, including the entertainment sector, real estate agents, truckers at the ports of Los Angeles and Long Beach, and freelancers of all sorts.

Gonzalez estimated that this expanded class of workers includes about 1.5 million California workers, or about 10 percent of the state’s workforce.

“This bill ensures that the millions of Californians who aren’t treated as employees, including workers in the evolving gig economy, simply have the option to organize and collectively bargain for better pay and working conditions for themselves for the work that they perform,” Gonzalez said in a statement introducing her amended bill.

Under Gonzalez’s bill, any group of 10 or more independent contractors working for a common payer – so long as they all receive 1099 IRS forms – can choose to come together into a “self-organizing unit,” which then could meet with the employer to negotiate wages and working conditions.

While those self-organizing units would bear some similarity to unions, they would differ in one key respect: Each member must be paid by the same entity. The Service Employees International Union, by contrast, has hundreds of thousands of members and collective-bargaining agreements with thousands of companies and public-sector employers across the nation. Even union locals have contracts with multiple employers.

That is the prospect that most concerns the Internet Association.

“A single company could have different negotiated contracts with several different bargaining units,” the association’s Callahan said. “There would be no consistency in pricing, and it would turn into an administrative and logistical nightmare – not to mention very costly.”

Not everyone agrees these self-organizing bargaining units would multiply. One local labor law attorney said that unless these self-organized groups of independent contractors would be willing to go on strike if their demands weren’t met, they would have little effectiveness at the bargaining table.

“I’ve seen efforts like this be tried before and it’s very difficult to get people organized,” said Steve Atkinson, one of the founding partners in Cerritos law firm Atkinson Andelson Loya Ruud & Romo. “Yes, they may want more money, but are they going to agree to strike if their terms are not met? That’s the key.”