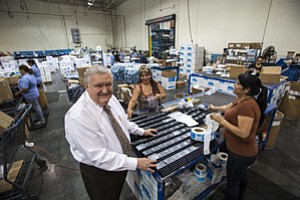 Editor's Note: This article has been corrected from an earlier version.

When Donald Friese joined CR Laurence Co. as a warehouse worker in 1961 soon after his discharge from the Army, he was the seventh employee of an ordinary local glass company.

He can certainly afford the rent now. After spending his entire career at the Vernon glass products supplier, becoming sole owner and building it into a global player with 1,700 employees on three continents, Friese last week sold the company in a deal that makes him L.A.’s newest billionaire.

In one of the larger deals the glass industry has seen in years, Friese sold CR Laurence to Oldcastle Building Envelope, a subsidiary of Irish building supply giant CRH Group, for $1.2 billion in cash and a $100 million promissory note. He’ll also stay on as CR Laurence’s chief executive.

Though Friese will pay hundreds of millions in taxes after the deal, his personal net worth is almost certainly more than $1 billion, Greif estimates, thanks to his ownership of the millions of square feet of industrial and office real estate CR Laurence occupies around the globe.

Friese is sharing some of his newly liquid wealth. In an unusual move, he sent a thank-you bonus note – with a check attached – to each of his employees with at least one year of service at the company. The payouts total in the ballpark of $80 million, with the average eligible worker potentially taking home nearly $50,000.

“It’s the employees who have made the company the powerhouse that it is and they deserve the recognition and the reward,” Friese said last week just after signing the final paperwork on the company’s sale.

For Friese, the sale marks the culmination of a five-year effort to sell the company, one that started as he turned 70 and realized he had no viable succession plan.

“I would often joke that if something happened to me, my wife would run the company,” he said. “I love my wife dearly and she is an absolutely wonderful person, but she doesn’t know the business.”

Friese added his son wasn’t yet ready to take the reins of a global company – “In 10 years maybe, but I needed a plan in place sooner than that.”

The sale effort became serious a year ago after he received an unsolicited offer from a private equity firm. He ran the offer by Greif, whom he had known for years, and the pair decided they could do better.

“My main issue was that I wanted to make sure that whoever bought the company would allow us to run it, keep all the pieces intact and all the employees on board,” Friese said.

After running through offers from a number of other private equity firms, Friese settled on the only offer from an industry player, the Oldcastle subsidiary.

Oldcastle makes metal window frame components as well as glass for windows, doors, skylights and such. CR Laurence makes or distributes products that affix to glass or are used to install glass – some 65,000 products in all, including door and window handles, automotive sunroof attachments and a wide assortment of adhesives and power tools.

“I like to say we make everything associated with glass but the glass itself,” Friese said.

CR Laurence has over 1 million square feet of space in Vernon on three sites. Most of the space is warehouse, but there are also corporate offices and one manufacturing facility. Friese said about 1,100 employees work at all the Vernon facilities.

CR Laurence’s main customers are custom glass manufacturers and the contractors who install glass in commercial and residential buildings. The massive assortment of products are arrayed in the company’s huge warehouses and then shipped overnight to locations in North America or to clients in Europe and Australia.

The company takes its name from Charles Robert Laurence, an L.A. businessman who in the 1920s started a metal-stamping operation and branched out into a number of other areas, including some glass supply. It wasn’t until around the time Friese came on board in 1961 that the focus turned mainly to glass-related products.

Friese hadn’t initially planned on staying long, but as he watched high-rises go up and saw the sales of homes and cars zoom, he soon saw the opportunity in selling glass products and decided to stay put.

As he rose through the ranks, he became the protégé of then-owner Bernie Harris and eventually acquired a 50 percent stake in the company. Friese became sole owner in 1997.

At that time, the company had already grown to $100 million in annual sales. Friese continued the expansion, adding products and expanding into new geographies. He built warehouses, opened offices in North America and abroad as well as helped develop new niches for glass products.

“When I first started here, nobody had thought of all-glass shower doors,” he said. “We pioneered that and now it’s a huge market.”

In recent years, the glass industry, like many manufacturing segments, has gone through a wave of consolidation, pushed by global cost pressures and domestic regulation.

“Larger, more integrated manufacturing organizations are better equipped to absorb challenging financial conditions – and are especially better positioned to overcome or afford huge regulatory challenges that are holding back manufacturing in the United States,” said Bill Yanek, executive vice president of the Glass Association of North America. “The glass industry is no different in this respect.”

Indeed, during the Great Recession, CR Laurence seized the opportunity to buy companies on the cheap. In 2011, it acquired U.S. Aluminum of Monterey Park out of bankruptcy, giving CR Laurence, which had long used aluminum products to affix to the glassware it sells, a foothold in the aluminum market.

Now that CR Laurence itself has been purchased, the view from one industry expert is that the deal will benefit both companies. Lyle Hill, a former glazing company executive who is now managing director with Keytech North America, a research and market services provider to the glass and metals industry, said the companies will need to figure out how they will deal with a few overlapping business areas, but he expects CR Laurence to be a good pickup

“I think these are two very well-run, well-led and extremely successful organizations that did not jump into this without careful planning and analysis,” Hill said in a blog last week for U.S. Glass Magazine. “What they plan to do about overlaps in sales efforts, certain extrusion components and so forth are, in the long run, quite minor issues.”