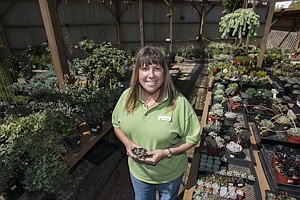 For many outdoor growers, California’s worsening drought is bringing misery and hard choices. But for Ellyn Meikle, it has presented a business opportunity: the chance to open up a nursery specializing in drought-tolerant plants.

Meikle, a gardening hobbyist, opened the Water Wise Garden Center last spring on a small parcel she leased on Crenshaw Boulevard in south Torrance and began selling succulent plants, cacti and orchids, all of which do well in Southern California’s increasingly arid climate.

Her business has been booming ever since. Meikle said that she’s done more in sales in the first three months of this year than the nearly seven months she was open last year.

“Had it not been for the drought, I probably would have kept up my little home business and not started a formal business,” she said. “But with the drought, and this property that became available, it was God’s way of saying it’s time to start my business.”

Meikle is not alone. Other nurseries specializing in drought-tolerant plants have also seen their business grow over the past 15 months, ever since Gov. Jerry Brown first declared the state in a drought. And still others have switched over much of their plant stock to these water-stingy plants.

They’re benefiting not only from rising consumer awareness of the drought, but also from an increasing array of incentives and rebates from local water agencies pushing conservation.

The Los Angeles Department of Water & Power, water wholesaler Metropolitan Water District of Southern California and numerous other local agencies offer “cash for turf” programs, which give customers anywhere from $2 to $3.75 for every square foot of lawn they tear up and replace with low water-use plants.

Besides the cacti and succulents that typically come to mind for their water stinginess, dozens of native species also consume small amounts of water and generally qualify for the cash-for-turf rebates – from the Carmel-Sur Manzanita ground cover to the Santa Barbara daisy plant. Plants found in other Mediterranean climates around the world, from Australia to the Middle East and northern Africa, also qualify.

These rebates have been driving traffic into at least one local nursery specializing in drought-tolerant plants.

“We’ve got people coming in from Glendale, Burbank and Los Angeles all mentioning these rebates they will collect if they remove their lawns,” said Malinee Romero, garden designer and saleswoman at the California Cactus Center in Pasadena. Romero and her five sisters co-own the nursery their father, an emigrant from Thailand, founded 40 years ago.

Overall, sales at California Cactus are up about 20 percent over the past year, said another of the founder’s daughters, Molly Thongthiraj.

“People who never liked cacti and succulents before are now coming in looking for them,” Thongthiraj said.

One local wholesale nursery specializing in native California and Mediterranean plants said they also have enjoyed an uptick.

“We’ve definitely noticed an increase in our sales over the past couple years,” said Rebecca Nash, sales and marketing manager for El Nativo Growers Inc. in Azusa.

It’s not just homeowners or their gardeners who want drought-tolerant plants. Thongthiraj said landscape contractors for commercial properties are coming in more frequently because their clients are demanding water-saving plants.

She said that during previous droughts, sales of cacti and succulents were largely confined to aficionados and collectors. Now, they’ve gained mainstream acceptance, which has helped her business.

One reason: They save on maintenance costs. For example, the Cactus Center’s best-selling succulents – agave – need very little water, are slow growing and only flower once, so there’s very little ongoing maintenance needed.

“If you don’t have a lawn that needs mowing and you don’t need to trim plants and water them a couple times a week, then you don’t need a gardener to come as often,” saleswoman Romero said. “And that saves money.”

The same applies for commercial properties, where traditional flowering plants are often rotated out every 90 days. With succulents or most other drought-tolerant plants, such frequent change-outs aren’t necessary.

As California’s drought persists and the market for drought-tolerant plants grows, more traditional nurseries have also been shifting toward succulents and cacti, said Sandra Giarde, executive director of the California Landscape Contractors Association in Sacramento.

“A lot of nurseries are changing their stock, responding to demand for drought-tolerant plants,” Giarde said. “We’re even seeing this at the big-box and home improvement stores.”

While much of the demand is coming from homeowners, multifamily and commercial property owners are also asking their landscape contractors to install drought-tolerant flora, Giarde said.

“I just met with 10 of our landscaping contractors this morning and every single one of them said that most of their customers are demanding the drought-tolerant landscapes,” Giarde said last week, noting that two of those contractors focus exclusively on commercial properties.