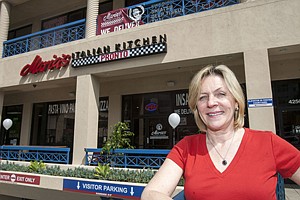 For Madelyn Alfano’s restaurants, a proposed minimum-wage hike in Los Angeles could drive up costs by as much as 40 percent.

That’s why Alfano, owner of local chain Maria’s Italian Kitchen, is heartened by a new proposal in Sacramento that could take much of the sting out of local wage increases by letting employers pay a lower hourly wage to tipped workers than they pay to other minimum-wage employees.

The proposal, Assembly Bill 669, sponsored by the California Restaurant Association, would freeze the statewide minimum wage at the current $9 an hour for most tipped employees, even if state or local lawmakers raise the minimum wage. Tipped workers earning less than $4 an hour in tips would be exempted from the freeze and would be paid the same minimum wage as other workers.

The bill would overturn a nearly 40-year-old prohibition against paying lower wages to tipped employees, a ban that the restaurant industry has long sought to undo.

If the bill becomes law, Alfano said it could allow her to hold the line on costs for roughly half her 400 employees for years to come. It also could better target the wage increases to kitchen workers and other staff that don’t receive tips.

But there’s a catch – a big one – that could mean Alfano and many other restaurant owners never see the bill’s promised savings. While the bill would exempt tipped workers from local wage hikes, it would also allow cities to specify otherwise, saying their wage increases apply to all workers, thereby negating the bill. Under pressure from unions, there’s a good chance some cities would insert such clauses into their minimum-wage ordinances.

The bill’s author, Assemblyman Tom Daly, D-Anaheim, and backers say the provision is necessary to ensure cities won’t oppose the bill on the grounds that it amounts to a Sacramento overreach.

Still, the bill could help businesses in the majority of California cities, which do not have their own minimum-wage laws. So far, only seven cities, including San Francisco, Oakland and San Jose, have enacted their own minimum wages. Los Angeles is the only local city considering specific wage-hike proposals, though Santa Monica and West Hollywood could soon follow suit.

Local restaurateurs like the idea behind the bill, though they fret that the option for cities to opt out would render the bill moot in many places. That’s especially the case in Los Angeles, where business owners believe union clout will ensure a minimum-wage increase applies to all workers.

“Without the loophole being closed, this is pretty much worthless,” said Jeff Kavin, owner of Greenblatt’s Deli in Hollywood.

Still, some restaurant owners say the bill is better than the current situation.

High-end restaurant investor Bill Chait said if Daly’s bill passes, he might be able to keep tipped workers at some of his restaurants at $9 after the state minimum wage rises next year. In cities where that’s the case, being able to pay a lower wage to tipped workers would help him raise the pay of other workers.

“We really need to raise compensation for people in the kitchen, but we can’t do that as effectively if we also have to pay more to servers who already take home $30 or $40 an hour,” said Chait, managing partner of an investment group that runs 13 local restaurants, including downtown L.A.’s Bestia and Republique near the Miracle Mile. “There’s only so much money to go around.”

One local business group is looking closely at the bill. The West Hollywood Chamber of Commerce has been pushing hard for state legislation to establish a lower wage tier for tipped employees as that city is contemplating whether to establish a minimum wage of its own.

After proposing to raise the minimum wage in Los Angeles to $13.25 an hour by 2017, Mayor Eric Garcetti in September asked nearby cities to raise their minimum wages, too. So far, West Hollywood and Santa Monica are the only cities to have introduced wage-hike proposals, but both appear to be waiting to see how Los Angeles will act.

“We are looking at equitable solutions that create an even playing field with gratuity-based employees and seek legislation at the state level that might address these concerns,” chamber board Chairman Keith Kaplan said in a statement.

As for this particular bill, chamber Chief Executive Genevieve Morrill said the group has not taken a position. The chamber wants to take a closer look at the language, especially the loophole.

Even the bill’s sponsor, the California Restaurant Association, acknowledges that the loophole could limit the bill’s impact. But association Chief Executive Jot Condie defended the compromise, saying officials in many cities have told him they want to be able to exempt tipped workers from minimum-wage increases.

But while cities might like that freedom, labor groups are likely to oppose a separate, lower pay tier for tipped workers. Even if the Daly bill were to pass, unions could simply push cities to pass minimum-wage hikes that apply to tipped and untipped workers.

“This kind of bill is proposed all the time,” said Leigh Shelton, a spokeswoman for UniteHere Local 11, a union representing local hotel and restaurant workers. “But we’re hard-pressed to see why the Legislature would suddenly ask workers to take a step back when cities and states across the country are finally moving things forward.”

Most states already allow employers to pay lower hourly wages to tipped employees. But in California, Gov. Jerry Brown, in his first go-around as governor, signed legislation requiring that all tipped workers be paid the statewide minimum wage.

Ever since, the restaurant industry has been trying to get an exemption for tipped employees.

Restaurant investor Chait said things have changed since Brown signed that law. Back then, tips were simply collected and taken home by servers. Now, servers must disclose their tips to restaurant operators, who in turn pay Social Security, Medicare and income taxes on that money on workers’ behalf.

“That effectively turns tips into a recorded form of compensation,” Chait said, arguing that recorded compensation should count toward payment of a minimum wage.

What’s more, at many restaurants, tips are now collected by the restaurant operator and distributed among the serving staff, formalizing what Chait termed a two-tier pay system – one for servers and one for kitchen staff.

Chait said the difference in the two pay levels can be huge, especially at the higher-end restaurants his investment group owns. On a $100 dinner bill, which is common at his restaurants, the tip is generally $18 to $20.

“We’ve got servers bringing in as much as $50 an hour in tips; it doesn’t make sense that they should get the same minimum-wage raise that the kitchen staff receives,” he said.

That’s precisely the reasoning that Assemblyman Daly used in introducing his bill. He noted that, at many restaurants, tipped employees are paid the minimum wage while kitchen workers and other staff are paid slightly more. That means a minimum-wage increase could, paradoxically, benefit tip-earning servers before helping kitchen staff, Daly said in a fact sheet accompanying the bill.

David Miller, a spokesman for Daly acknowledged that the proposed lower-tier wage for tipped employees might be over-ridden in some cities, but said Daly still hopes “that this bill helps to broaden the discussion about the minimum wage, both at the local level and in the state Capitol.”