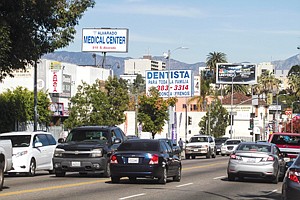 Road to Acceptance?: Billboards and other signage along Alvarado Street between Olympic and Wilshire boulevards near downtown Los Angeles. Photo by Ringo Chiu.

Shoddy record-keeping and a problematic state law have L.A. city officials poised to give up their fight against billboard owners. If so, that would allow the companies to keep nearly 1,000 signs that either lack clear permits or are breaking other rules – and to avoid paying hundreds of thousands of dollars in penalties.

The looming city surrender would avoid a legal battle with billboard companies – a battle city officials believe they would lose thanks to missing permit records and a state code that allows unlawfully built billboards to become legal if the city hasn’t gone after them for at least five years.

“It may sound like we’re giving away the store, but that’s the wrong question,” City Councilman Mitch Englander said last week. “If we’re not going to win, why spend valuable resources going after these signs?”

Englander is a member of a council committee that last month endorsed a proposal to not take action against 942 billboards, all of which are either out of compliance with city codes and permit rules or whose permits cannot be found. That move has riled billboard opponents and community groups who have long pushed the city to more aggressively pursue violators and remove as many billboards as possible.

“We’re really opposed to this wholesale grandfathering in of these billboards that are in violation of the law,” said Dennis Hathaway, president of Venice group Coalition to Ban Billboard Blight. “The billboards without permits should be taken down and those in violation of their permits should be required to comply and pay their penalties or be taken down.”

The full City Council, which usually goes along with committee recommendations, likely will consider the proposal in the next two or three months. It’s the first part of a massive overhaul of the city’s billboard regulations that could hike penalties for future rule-breakers and allow digital billboards back into the city. Digital billboards went dark a couple of years ago after a court overturned an agreement the city reached with billboard operators over the electronic signs.

Sign companies support the proposal to let the problem billboards stand, even though it could mean that some operators who put up blatantly illegal signs would essentially get a pass. They say most of the billboards have received permits, but that over the decades the city has lost track of them.

“We support the concept of grandfathering, especially as it relates to older signs whose permits have had city record-keeping issues,” said Fiona Hutton, spokeswoman for Clear Channel Outdoor’s L.A. office.

ClearChannel of San Antonio is one of the three largest operators of the city’s nearly 5,900 billboards; the other two are Outfront Media (formerly CBS Outdoor) of New York and Lamar Advertising of Baton Rouge, La.

In Los Angeles, these three companies are represented by the Los Angeles Advertising Coalition, whose executive director, Stacy Miller, issued a brief statement to the Business Journal last week:

“We are supportive of concepts that grandfather in older signs that lack documentation at the city, yet were legally built or altered at the time of their original construction and/or improvement,” Miller said.

The proposal endorsed by Englander’s committee addresses two types of billboards: those that violate permit conditions or other city codes, and those whose permits cannot be found in city files – either because they were never permitted or because the city has lost track of the paperwork.

The Department of Building and Safety, which inspects billboards, released a billboard inventory in 2012 that found 723 billboards for which permits could not be found. Last week, the department gave a revised estimate to the Business Journal of 546 billboards.

“But because we don’t have the records, it’s impossible to tell how many were issued permits and how many weren’t,” Bush said.

Sign industry representatives claim the vast majority of these billboards were issued permits and that the city has lost track of them. But billboard opponent Hathaway said that he suspects at least half of these 546 billboards never had permits.

“These billboards were put up illegally and should come down,” he said.

But city officials, including City Attorney Mike Feuer, the Planning Department and the council’s planning committee, have all concluded that they can’t order the billboards to be taken down because of a state law. A section of the state business and professions code says a sign can be considered lawful if it has existed for at least five years without the owner having received notice otherwise.

Given that rule, Englander said it would be a waste of taxpayer dollars to try to force sign companies to take down the signs.

While city officials agree on giving these billboards a pass, they disagree on the other category: the 396 billboards that have permits but have been found to be out of compliance with permit terms or other city codes.

The City Council planning committee and the sign industry favor grandfathering in these billboards, too. They contend most of these violations are minor, such as a billboard being a foot or two taller than permitted or being moved a few feet.

“Sometimes a permit is granted to place a billboard in a specific location and then, when the post is being placed in the ground, the contractors find a gas line and have to move the billboard a few feet,” Englander said. “Given the minor degree of these violations, it’s not worth it in taxpayer dollars and city resources to go after the sign companies, who would probably fight us anyway.”

But the Planning Department has recommended that the city go after these violators, force them to comply and subject them to the new harsh penalties if they don’t. The city is expected to increase fines on noncompliant billboards to as much as $48,000 a day as part of its broader billboard overhaul.

In a report issued in the spring, the department said that because these billboards have permits, it’s possible to determine whether they comply with the regulations in effect from the time of construction. That should be enough legal ground to stand up in court.

Billboard opponent Hathaway agrees. He contends many of the violations are more substantial, including several instances where a billboard has a permit for a single sign facing one direction but actually has two signs facing both directions.

“Two signs instead of one does not strike me as a minor violation,” Hathaway said.

Moreover, he said, such egregious violations are not rare.

And it’s more than just existing billboards at stake. The council’s decision about the 942 billboards also plays into an upcoming debate about the return of digital billboards to the city.

Under a proposal now being considered, electronic billboards would be allowed again, but operators would have to take down at least one square foot of ordinary billboard for each square foot of digital signage.

But if the council decides to legitimize the 942 problem billboards in the city, it could open a debate on whether billboard operators could get credit for taking down previously unpermitted signs.

In its report in the spring, the Planning Department recommended making the signs whose permits could not be found eligible for removal in exchange for digital billboard space.

Hathaway said he will oppose a move to include any of the problem billboards in this equation.

“That would be tantamount to rewarding the sign companies for their bad behavior,” he said.