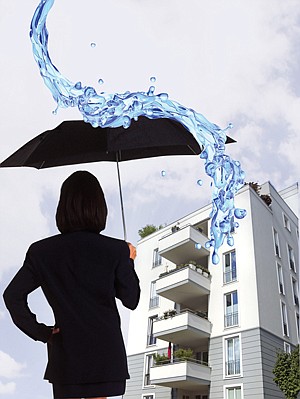 For years, landlords have been trying in vain to get apartment tenants to more directly pay for the water they use. But now, with the state’s worsening drought and major water cutbacks looming, landlords are selling the idea as a way to conserve water – and politicians in Los Angeles and Sacramento appear to be listening.

Locally, landlords are in talks with Los Angeles Mayor Eric Garcetti about amending the city’s tough rent-control ordinance to allow owners of older apartment buildings to bill residents for water use. Garcetti is open to the idea and says he is exploring ways of doing this without drawing too much ire from tenants’ rights groups.

Up in Sacramento, landlords are hoping to push through a bill that takes a step toward putting individual water meters into newly built apartments, a move that would shift the burden of water costs from landlords to tenants. Sen. Lois Wolk, D-Napa, is carrying the bill, which she touts as a potential water saver: If tenants have to pay for the water they use, she reasons, they’ll have an incentive to use less.

In both cases, local landlords say the drought strengthens their hand, giving them a conservation-minded argument for billing tenants in addition to their long-standing belief that they shouldn’t have to pay for water use they can’t control.

“If we’re serious about water conservation, we have to be serious about this with tenants, making them financially responsible for the water they are using,” said Earle Vaughan, a landlord who owns six small multifamily properties in Los Angeles and one in Lawndale.

The conservation argument comes at a critical time for landlords, who could face tough penalties if they can’t meet state and local water conservation mandates.

“We could get penalized for not complying with the governor’s mandate when we have no control over that water usage,” Vaughan said. “It’s just not right.”

Still, tenant advocates strongly oppose the landlords’ effort in Los Angeles, and they are wary of Wolk’s bill.

“Landlords are attempting to get around the rent-control law in Los Angeles,” said Larry Gross, executive director of the Coalition for Economic Survival, a tenants’ rights organization in Los Angeles. “Their proposal is really a hidden rent increase in the guise of water billing.”

Landlords can already pass on water bills to tenants in buildings built since 1979. But buildings erected before that, which represent more than half of L.A.’s apartment buildings, are governed by the city’s rent-control ordinance. That law not only caps annual rent increases but also forbids landlords from passing water bills and many charges along to tenants.

For the past 10 years, landlords have tried off and on to get the city to amend its rent-control ordinance to allow water bills to be passed on to tenants in pre-1979 buildings, to no avail. But now, Irma Vargas, past president of the Apartment Association of Greater Los Angeles, said there’s more urgency from landlords because of the expectation that water rates will increase sharply as drought-related water limits take hold in coming months.

Jim Clarke, the apartment association’s executive vice president, said the group is in talks with Garcetti’s office about the issue. They are selling the idea as a way to increase water conservation, saying that if tenants receive water bills, they will pay more attention to how much water they use and more quickly report leaks to apartment managers.

Under the plan, which is still in early stages, landlords of pre-1979 buildings would be allowed to hire third-party utility billing companies, which use a formula to estimate how much water is used by each apartment unit, based on the number of residents and plumbing fixtures.

(In most buildings, there are no water meters for individual apartment units, but rather a single meter for the entire building – which is one reason landlords have always paid the water bill themselves. Landlords of some post-’79 buildings already use third-party billing companies to pass along water costs to tenants.)

In a concession to tenant advocates, landlords say they would cut tenants’ rent by the amount of their first monthly water bill, keeping tenants’ total monthly payment flat – so long as their water costs don’t rise.

But tenant advocate Gross said a one-time rent reduction is not enough. He said billing companies often pass on their administrative charges in the water bills and that the formulas they use do not take into account variations in water use among residents.

“Say one tenant works long hours, showers at the gym and eats take-out food, while another tenant uses twice as much water because they are home all day and cook most of their meals,” Gross said. “The formula treats them the same. The only fair way to do this is to install individual meters on each of the units.”

But in older buildings, installing individual water meters would cost thousands of dollars for each unit, an expense landlords say they cannot afford.

A spokeswoman for Garcetti said he supports the idea of having individual water meters for each unit, but added that technology might offer a solution.

“The ideal approach is to install submeters and bill tenants for actual usage,” spokeswoman Molly Fowler said. “While submeters can be costly, there are new technologies that may help and we are working to understand those options.”

Some of the new technologies include devices that can be installed on existing pipes or plumbing fixtures that can wirelessly monitor water flow, eliminating the need for costly plumbing retrofits.

In Sacramento, meanwhile, Wolk’s legislation would take a major step toward requiring submeters for newly built apartments. Her SB 7 would require that all new projects have plumbing in place so that individual units can have submeters installed.

“When installed and read, submetering encourages water users to be more aware of their usage, giving them a financial incentive to conserve,” Wolk said in a statement when she introduced the bill. “Given the extent of the drought and the need for greater water conservation in California, all of the state’s residents should be armed with the knowledge of how much water they are using, in order for them to take steps to reduce their usage.”

Tenant advocate Gross said he has some concerns about the Wolk bill, which he said needs to include protections for tenants.

“The biggest thing is disclosure: Before they sign the lease in a building with submeters, tenants must know that they will be responsible for their water bills,” he said. “And there must be some limits on billing fees.”

But the bill has been welcomed by at least one local apartment developer, who called it long overdue.

Venice landlord Carl Lambert, who owns eight apartment buildings and has developed some properties, said submeters make a big difference. Years ago, he installed submeters in one of his buildings. It was expensive, costing around $5,000 a unit in today’s dollars, but he’s had no complaints from tenants.

“They control their own destiny, so if they see the water bill going up, they take steps to bring it back down and the total water use stays low,” Lambert said.

In his other buildings where he pays for all the water use, he said it’s a different story. There are always a few tenants who know their toilet has been running or that their faucet is leaking but who never get around to reporting problems because they don’t have to pay for the water. That leaves it to building managers to find leaks during periodic inspections.

“Some people will abuse the water use if they don’t have to pay for it,” he said. “That’s human nature.”