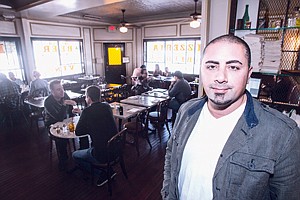 George Abou-Daoud had plans to expand his restaurant empire out of Hollywood and into downtown Los Angeles, but that was before city leaders proposed nearly doubling the local minimum wage over just a few years.

He’s halted his expansion plans, saying those wage hikes would add too many burdens on his nine restaurants, well beyond just paying more to his minimum-wage workers. Payroll taxes, workers’ compensation insurance premiums and wages for other workers would all increase, as would the price of food – costly headaches he said politicians aren’t thinking about.

To cover those costs, he estimates he’d have to raise prices by about 35 percent – an increase he said is unrealistic.

So he’s shelved plans to open restaurants in downtown and Echo Park, though he is going ahead with a new restaurant in the Sunset Junction neighborhood that was in the works months before news of the proposed minimum-wage hikes broke.

“I already had too much sunk into that new space to pull out,” said Abou-Daoud, 39, whose restaurants include Bowery gastropub and Delancey Pizzeria. “But any further expansion in the city is out of the question.”

On Labor Day, Los Angeles Mayor Eric Garcetti proposed hiking the minimum wage to $13.25 an hour by 2017. Then earlier this month, the City Council considered going even further, voting to study raising the wage to $15.25 an hour by 2019. The council could act on either or both proposals by early next year, though that time line could change. A group of council members last week called for a study of how wage hikes would affect small businesses and non-profits.

Abou-Daoud, a former economist who supported Garcetti’s mayoral bid last year, said the magnitude of the proposed increases – as much as a 70 percent increase over five years – shows the lack of understanding from politicians about their consequences.

He has even offered, through the Hollywood Chamber of Commerce, to open his books to any politician who asks him to prove his point.

“I support labor, but it’s just not possible, given the margins that my restaurants – and most restaurants – have and the expenses they face, to pay so much more,” Abou-Daoud said. “I’m speaking for all restaurant owners and many, many other small businesses.”

Indeed, many business owners and groups in Hollywood and the rest of the city say the proposed wage hike, because of its magnitude, will hurt both their bottom lines and many of the workers the wage increase is designed to help.

While proponents of raising the minimum wage say it will pump money into the local economy and boost sales at local businesses, some concede that independent restaurant owners like Abou-Daoud will have to make some tough choices.

“No question this is a major issue for a business like a restaurant that has a lot of workers close to the minimum wage,” said Daniel Flaming, president of the Los Angeles Economic Roundtable, a non-profit that has conducted economic studies for local labor unions. “This restaurant owner is going to have to adapt his business model to new realities.”

Abou-Daoud said politicians and the economic studies they rely on don’t fully factor in the secondary costs of a wage increase. If the number of employees and the hours they work stay the same, a minimum-wage hike increases total payroll, and total payroll is used to calculate three employer expenses: withholding taxes, including Social Security; unemployment insurance; and workers’ compensation premiums.

Abou-Daoud figures those expenses add roughly 30 percent to the cost for each of his workers. So if he’s paying a server the current minimum wage of $9 an hour, his total cost is nearly $12 an hour.

Culver City restaurant consultant Jerry Prendergrast agreed that these costs are generally not factored into discussions of raising the minimum wage, and said Abou-Daoud’s figures are on the low end of what he’s seen at other restaurants.

“Generally, when you raise the minimum wage by $1, that translates into somewhere between $1.40 and $1.50 in total additional per-worker cost,” Prendergrast said. By his math, the proposed wage increase would add nearly $9 an hour to current costs.

“That’s a huge hit, no matter how you slice it,” he said.

Over the years, most minimum-wage increases have been around $1, so these secondary cost increases have been manageable, he said. And wage-hike proponents say any increase will be phased in – going up in annual increments of $1 to $1.50 – specifically to make it easier for employers to handle. But Prendergrast said such a rapid succession of increases would still sting.

“You no sooner get through one increase then you have to prepare for the next one,” he said.

Abou-Daoud said he will likely have to cut worker hours and reduce staff if there’s a wage increase. Already, the statewide hike in the minimum wage from $8 to $9 an hour this summer played a role in his decision to close two restaurants in Hollywood, though he said there were other factors that played into that decision.

He’s not the only one thinking about cutting hours. The Hollywood chamber is surveying its members about the impact of the wage increase. So far, more than one-third of survey respondents say they would have to reduce staff or the hours employees work, while a handful say they would be forced to shut down or move out of Los Angeles, said Leron Gubler, the chamber’s chief executive.

That’s despite the finding that 43 percent of respondents say they support the concept of raising the minimum wage.

“This is the No. 1 topic and the No. 1concern among our members,” Gubler said. “And what this survey tells us is that it’s the magnitude of the increases that’s causing the most concern.”

At Abou-Daoud’s restaurants, servers and dishwashers – about half of his 230 employees – earn the minimum wage. But wages for most other employees are pegged to the minimum. For instance, food preparers and shift supervisors typically earn either $2 or $4 above the minimum.

If the minimum wage rises, Abou-Daoud said he would have to increase the pay of those workers as well. He calls it the “escalator effect.”

He said he intends to continue this practice, though whether he would be able to maintain the same spread remains to be seen. Indeed, economist Flaming said this is one area where Abou-Daoud might be forced to “adapt.”

Then there are food costs. Abou-Daoud said he gets most of his food from growers in the Southern California region. Many use local warehouses and trucking companies that would face the same minimum-wage increases and would likely pass the higher costs on to him. He noted that food prices, especially for meat and dairy products, have risen sharply over the past few years.

Those added costs are already putting pressure on profit margins, which Abou-Daoud said range between 5 percent and 12 percent at his nine restaurants – numbers Prendergrast said are common.

To keep his margins, staffing and employee hours as they are now, Abou-Daoud estimates he’d have to raise prices by about 35 percent, a level that he said isn’t feasible.

Three of his restaurants are fast-casual spots, which compete with big chain restaurants and have the least flexibility to raise prices. A recent survey by polling firm Rasmussen Reports in Asbury Park, N.J., found that 48 percent of Americans aren’t willing to pay more for fast food to pay for higher worker wages.

“When I’m going up against the big chain stores like Subway that have centralized distribution systems and huge buying power and can charge $5 for a footlong sandwich, I can’t raise my prices more than 5 or 10 percent,” Abou-Daoud said.

By his account, it’s not that much easier to raise prices at his full-service restaurants. He said he’s been able to up the prices of some entrées at those locations by about 20 percent, but over the course of a decade.

He noted that his restaurants aren’t the kind of elite eateries – think of the Ivy on Robertson Boulevard, a pricey celebrity hot spot – where many diners will unthinkingly plunk down $60 or more for an entrée.

But economist Chris Thornberg, founding partner of Beacon Economics in Los Angeles, said Abou-Daoud is underestimating his ability to raise prices, especially since a wage increase would push so many other restaurants in the city to raise theirs.

Thornberg, who shares many of Abou-Daoud’s concerns about the proposed wage hikes, said the Hollywood restaurateur benefits in that his eateries are miles away from neighboring cities – meaning there’s no border to skip across for a cheaper meal. Restaurants closer to city boundaries, though, could lose customers to other cities if they raise prices too much.

“While I understand where he’s coming from, saying he can’t raise his prices is silly,” said Thornberg. “He would lose some business, but not all his business. He has more flexibility here than what he might lead you to believe.”

But consultant Prendergrast said that as prices rise, many people would downshift in their dining choices: The white-tablecloth set will move down to gastropubs, and gastropub customers will move down to fast casual. They’ll still go out, but they won’t be spending more money on dining than they do now.

“People will adjust by finding other outlets that are less expensive,” he said.