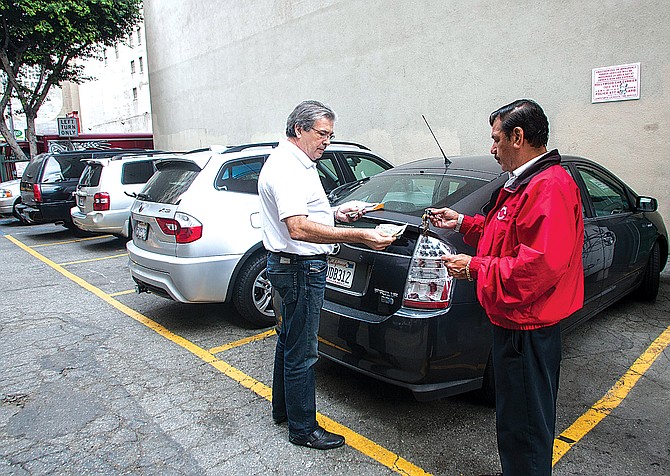 Price to Pay: Customer pays cash to a parking attendant at one of L&R Group’s lots in downtown Los Angeles. Photo by Ringo Chiu.

Every small parking lot from Venice to Boyle Heights could soon be required to install the same kind of expensive gate and payment system you’d find in the garage of a huge Century City high-rise – a change that could turn tiny lots into big money-losers.

It’s the latest salvo in the city’s long-running battle with parking-tax cheats. L.A. city leaders have proposed requiring all parking lot operators to accept credit card payments and perhaps install monitoring equipment to help ensure the city gets its fair share. But parking lot operators fear that will prove costly and hurt law-abiding operators while tax scofflaws will continue to get off scot free.

“We follow all the rules, yet the city is willing to place even more measures on us and not go after the real cheaters,” said Kevin Litwin, senior vice president with L&R Group of Cos. of Los Angeles, which operates more than 100 parking lots in the city, including several Joe’s Auto Parks downtown.

The city charges a parking tax of 10 percent on revenues and last year collected $96 million in parking tax revenues, according to City Controller Ron Galperin. But the city also estimates that it fails annually to collect an additional $15 million to $20 million in parking taxes from unscrupulous vendors who either under-report their revenue or avoid paying taxes altogether. Many of those vendors operate cash-only lots, making it difficult for authorities to trace the money.

Collecting parking revenue has long been a challenge for the city, and leaders over the years have proposed various methods for making sure all parking lot operators pay up. Two years ago, the city started requiring lot operators to post bonds to cover parking tax payments in advance. Galperin said he thinks that’s helped chip away at the problem, but hasn’t eliminated it.

Earlier this month, Mayor Eric Garcetti and Councilman Joe Buscaino introduced a package of proposals aimed at generating more money to fix city streets and sidewalks. One would require parking lot operators to use equipment that can track parking volumes and revenue.

The equipment includes devices that accept credit and debit card payments, automated cash-payment systems and electronic gate arms that monitor the number of cars coming in and out of a lot. The City Council is expected to consider that and other proposals next year.

But the new proposal is different in that it’s not clear whether the mandate for monitoring equipment would apply to all parking lots or only to known tax evaders. And that’s what has parking lot operators worried.

Accepting credit card payments can be as simple and inexpensive as a smartphone credit card app, commonly used by farmers’ market vendors and small retailers. One credit card app by San Francisco e-commerce firm Square Inc. charges a fee of 2.75 percent for each transaction – that’s not quite 28 cents for a $10 parking lot fee.

“When these ideas first came up two years ago, we made our concerns known to the city and the end result was that it was agreed that only the scofflaw operators would be targeted with these measures,” said Bob Hindle, chairman of the trade group Los Angeles Parking Association and vice president of Irvine’s Parking Concepts Inc., which has more than 60 locations in Los Angeles. “But the city looks to be going back on its word and there are a lot of upset operators in town.”

L&R Group’s Litwin is one of those upset operators. He said that being forced to install electronic gate arms or other monitoring equipment at a small surface lot with 30 or 40 spaces doesn’t make economic sense.

“You’re talking about a six-figure investment whose cost wouldn’t be recouped for decades, if ever,” Litwin said. “It’s nonsensical.”

In addition, he said electronic gates take away spaces, which can significantly reduce revenues in the smallest parking lots.

“We wanted to allow for a larger discussion in committee about the pros and cons of requiring each type of equipment,” he said.

(Buscaino last week was accompanying Garcetti on his trade mission to Asia and could not be reached for comment.)

Galperin said the requirement to offer credit card payments is the most vital component of bringing in more parking tax revenue.

“Not only does it offer greater convenience for the parking customer, but it also reduces the chances for unscrupulous operators to hide cash revenues from the city,” he said.

Credit card transactions, he said, leave an electronic trail that city auditors and prosecutors can track. It’s also possible for the city to set up systems that automatically siphon off 10 percent of revenues from credit card payments.

“All the other methods we’re talking about are ways for the city to come in and track what happens after the payment,” he said. “Reducing the amount of cash transactions is the best way for the city to prevent tax evasion before it happens.”

Of course, parking lot operators would still be allowed to accept cash payments. But Galperin and other city officials believe that if given the option, most customers would not pay in cash.

Yet even here, parking lot operators are skeptical that requiring the ability to handle credit card payments would actually result in an increased tax take for the city.

“Look, the scofflaws will find a way to manipulate whatever electronic devices are installed so that they still pay little or no tax,” Hindle said. “What’s really needed is a major enforcement effort against the operators that everyone knows are the unscrupulous players.”