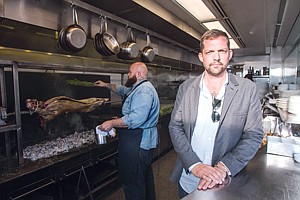 It was once a commercial bakery, and now it’s a destination for diners and furniture shoppers, but the Helms Bakery District could soon take on yet another role: Petri dish for L.A.’s minimum-wage experiment.

The complex straddles the boundary between Culver City and Los Angeles, so proposals that would hike the minimum wage only in Los Angeles would set the stage for a huge disparity for tenants and workers in the same center, with potential headaches for business owners on both sides.

While store owners on the L.A. side might grumble at having to shell out higher wages – as much as $15.25 an hour by 2019, up from $9 now – most of the concern now is coming from Culver City business owners, who fear they’ll have to raise their wages to compete for workers.

The bifurcated complex is just one of hundreds of properties on or near the L.A. city border that could find themselves at the heart of similar wage dramas should L.A. officials pass a minimum-wage increase. After all, 32 cities border Los Angeles – stretching from Calabasas and Pasadena to Carson and Long Beach. And the Westside cities of Beverly Hills, Culver City, Santa Monica and West Hollywood are almost surrounded by Los Angeles.

Ed Keebler, co-owner of Bucato, an Italian restaurant on the Culver City side of the Helms Bakery District, has 65 employees, with more than half earning the current minimum wage or just a dollar or two more.

If Los Angeles raises its minimum wage, he doesn’t believe his existing workers would immediately leave for one of the adjacent L.A. restaurants. But as some of his workers leave for other reasons, he said he expects it will be more difficult to replace them unless he raises wages to match those at higher-paying L.A. restaurants next door.

“Over the longer term, I fear we’ll be at a significant competitive disadvantage if we don’t raise our wages to remain attractive to top talent,” Keebler said.

The biggest concern from L.A. business leaders and elected officials is that a wage hike could drive low-wage employers and perhaps thousands of jobs into neighboring cities. That’s why just days after Los Angeles Mayor Eric Garcetti unveiled a proposal to raise the minimum wage, he met with the mayors of Beverly Hills, Culver City and West Hollywood, asking them to pass minimum-wage hikes of their own.

In Culver City, a proposal to raise the minimum wage has yet to find its way on to the council agenda.

But, as the Helms Bakery District illustrates, higher wages next door could still prove problematic for businesses in lower-wage cities.

“Business owners in our city are quite concerned that if Los Angeles raises its wage, their costs will have to go up, too,” said Steven Rose, president of the Culver City Chamber of Commerce. “That’s why we’re going to watch very closely what happens here at this Helms Bakery site – where businesses in L.A. and Culver City are right next door to each other.”

When the Helms Bakery still made bread, its building was in Los Angeles and went right up to the Culver City line. Since then, the center has expanded, mostly into Culver City, said Helms Bakery District landowner Walter Marks. His family bought the site in around 1970, shortly after the bakery closed.

Now the city line cuts through the southern one-third of the 11-acre complex, which is home to 58 tenants, including nine furniture stores and five restaurants, most of which have at least some workers at or near minimum wage.

Of the restaurants, Bucato; French eatery La Dijonaise Café; and Lukshon, owned by chef and restaurateur Sang Yoon, are on the Culver City side. Father’s Office, a gastropub, also owned by Yoon, is on the L.A. side, as is another restaurant set to open in the next few months.

Next door to Bucato – still in Culver City – George Haroonian, owner of the Rug Warehouse, said he, too, is concerned that if Los Angeles raises its wage, he might lose current or prospective employees to higher-paying establishments on the L.A. side.

This is exactly what proponents of raising the minimum wage in Los Angeles hope will happen if the City Council approves a wage hike sometime next year. They see the city’s huge size putting market pressure on businesses in neighboring cities to raise wages as they compete for workers.

L.A. city leaders are studying two wage-hike proposals: Garcetti’s plan to raise the wage to $13.25 an hour by 2017 and a proposal from six council members to go even further, hiking the wage to $15.25 an hour by 2019. Under each proposal, the minimum wage would rise at least $1 a year until the target is met, with wages adjusted annually for inflation thereafter.

Though workers would likely be tempted by the prospect of higher wages, one local economist said businesses outside of the city aren’t likely to see their workers leave en masse if L.A. wages rise.

“Not going to happen,” said Christopher Thornberg, president of L.A. economic consulting firm Beacon Economics. “For starters: What’s the first thing that’s going to happen when the wage goes up? Companies that must pay the higher wage will find ways to survive without hiring more workers.”

That means the L.A. stores likely won’t have openings for Culver City workers to fill, he said.

“And even if there were some openings, the competition for the higher-paying jobs would be quite intense, so the likelihood of workers on the Culver City side landing those jobs would be slim,” he added.

Indeed, a worker at one of the Helms Bakery District restaurants in Culver City didn’t exactly leap at the possibility of applying for a higher-paying job at a neighboring L.A. eatery should the minimum wage go up.

“It’s interesting that the wage might go up in Los Angeles but not in Culver City,” said the worker, who declined to give her name and requested her employer’s name be withheld. “But I really like where I’m working, so I’m not sure what I would do.”

Meanwhile, a furniture store operator on the L.A. side of the Helms Bakery District appeared to bear out Thornberg’s claim that businesses facing a mandatory wage hike would not be in any rush to expand employment.

Clark Postlewaite, L.A. store manager at Petaluma chain Plummer’s Furniture, said he believes that his business could withstand a hike to $13.25 an hour without too much of a problem, but anything beyond that might necessitate a hiring slowdown or staff cutbacks. Plummer’s has 18 employees at the Helms Bakery District store, and new employees typically start at $11 an hour.

“We think that going up to $15.25 an hour by 2019 could be an issue for us,” Postlewaite said. “We’ll have to find savings elsewhere or raise prices.”