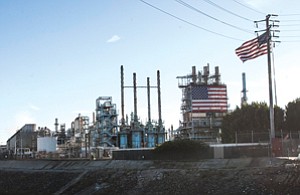 Hooking Up?: Tesoro’s Carson oil refinery, which the company hopes to connect to its facility in Wilmington. Photo by Ringo Chiu.

Once an out-of-state oil refiner that few Angelenos had ever heard of, Tesoro Corp. is now poised to become the biggest player in L.A.’s oil market.

The San Antonio company plans to spend $250 million over the next three years to combine two adjoining oil refineries in Carson and Wilmington, a project that would create by far the largest refinery in California.

Business groups are cheering the project, saying a larger, modernized refinery will benefit the local economy. But at least one environmental group is fighting the project, raising concerns about the possibility of more pollution as well as the notion that oil from Canadian tar sands could be imported by rail, which the group sees as a more dangerous mode of transport than by sea. Also, the group points out that heavy tar sands oil is harder to refine, causing more greenhouse gases to be produced.

Though Tesoro has only recently started applying for permits for the project, it’s been in the works for more than a year, ever since Tesoro purchased the Carson refinery from BP North America. Before that deal, Tesoro had committed to spending more than $1 billion to upgrade its Wilmington refinery, which it acquired in 2007 from Royal Dutch Shell. But that would have been a lot of money to spend on the relatively small refinery.

Instead, Tesoro applied that $1 billion toward its $2.4 billion purchase of the Carson refinery – and more than 800 Arco service stations – from BP. Now, by spending a comparatively modest $250 million on upgrades, Tesoro would end up with the largest refinery complex in the state, with nearly four times the capacity of the Wilmington refinery.

“Tesoro is doing something smart,” said David Hackett, president of Irvine energy and oil market consulting firm Stillwater Associates. “They needed to spend a lot of money at Wilmington; instead, they’ve been able to leverage their acquisition with Carson so that they end up with a much better refining package for Southern California.”

Tesoro plans to modernize oil-processing units at both facilities and replace aging oil storage tanks with larger ones. The combined refinery would be able to process oil from almost anywhere around the globe – including heavy or light crude – and would be able to produce 363,000 barrels a day of refined fuel.

The upgrades would also allow Tesoro to meet the latest round of federal and state emission reduction mandates.

The refinery project is pending before the South Coast Air Quality Management District, which must grant environmental approvals. The air quality board is expected to vote on the project sometime next year.

“The project provides an opportunity for Tesoro to deliver a more efficient, flexible and integrated refining, marketing and logistics system,” said Kenneth Dami, director of public and government affairs for Tesoro’s L.A. refinery. “We believe Tesoro’s investment of over $250 million for the project will benefit Southern California by reducing greenhouse gas emissions, creating local construction jobs and generating revenue for the local community.”

At the Wilmington refinery, the company plans to shut down an old fluid catalytic cracking unit, a key piece of equipment that converts heavy hydrocarbons in crude oil into lighter hydrocarbons found in gasoline. The company will then upgrade and expand the cracking unit at the Carson refinery. That move alone will account for most of the carbon, sulfur and other emission reductions at the combined refinery. Dami said the new equipment will allow the refinery to meet federal mandates to deliver more low-sulfur fuel by 2017.

Tesoro also plans to replace two older 80,000-barrel crude oil storage tanks with two 300,000-barrel tanks and build six 500,000-barrel tanks, dramatically increasing the amount of oil that can be stored at the site. That will allow oil tankers that dock at the Port of Long Beach to unload all of their oil at once. Tankers now often have to wait weeks to fully unload because of a lack of land-side oil tanks. (Long Beach’s oil import terminal is linked by pipeline to the Carson refinery.)

Currently, the two refineries process crude oil from all over the globe, including from California, Alaska and the Middle East. In an email to the Business Journal, Dami said there will be little or no change in the types of crude oil that the combined refinery can handle. But the refinery will be able to handle heavy tar sands crude from Canada – the kind that would be transported by the controversial proposed Keystone XL pipeline – as well as light crude oil from the Bakken shale formation in North Dakota, should they be shipped to California by rail.

To get state approval for its purchase of the Carson refinery, Tesoro reached an agreement with state Attorney General Kamala Harris to maintain refining capacity. The two refineries currently can produce up to 363,000 barrels of fuel a day, and Dami said that figure is not expected to change.

According to data from the California Energy Commission, the combined refinery’s 363,000-barrel capacity would place it firmly atop the list of refineries in the state, easily surpassing San Ramon-based Chevron Corp.’s El Segundo refinery. As of October 2012, that refinery was the state’s largest, with a capacity of 276,000 barrels a day.

Just as it agreed to maintain refining capacity, Tesoro also agreed to keep the number of jobs the same at the refining facilities, at least through next year. Currently, Dami said there are about 1,450 jobs at the two facilities, a number that is not expected to change when the combined facility fully comes on line in 2017. Dami said that there likely will be several hundred construction jobs during the project.

Those construction jobs and the increased efficiency at the combined refinery have helped the project draw support from business groups. Last month, the Los Angeles County Business Federation, or BizFed, sent a letter to the air quality district expressing its support for the project. Biz Fed represents 125 local business organizations with more than 268,000 business members that employ 3 million.

“The construction jobs are a good bonus that will strengthen the local economy,” said John Wogan, the chamber’s president.

Opposing the project is the Communities for a Better Environment, a Huntington Park organization that focuses on environmental justice issues. The group says it’s worried about emissions and safety at the combined refinery.

“We’re concerned about bigger storage of crude oil and about the transport of that material to and from the refinery,” said Alicia Rivera, Wilmington community organizer for the group.

She disputed statements from Tesoro that there would be lower emissions of greenhouse and sulfur gases from the combined facility than from each of the current refineries.

“If they will be storing so much more oil on site, we think the project is bigger than they are saying publicly,” Rivera said. “We think there will be more emissions, not less. And when you combine that with all the emissions from the other refineries in the area – Valero, Phillips 66 and ExxonMobil – the cumulative impact on people’s health is just too much.”

Furthermore, the group’s website claims Tesoro could import oil by rail, which they see as more dangerous than by sea. The organization also frets that Canadian Tar Sands oil could be brought in, resulting in the creation of more greenhouse gases to refine it. And the website describes light oil from the Bakken field in the Dakotas as “explosive.”

So far, major environmental groups such as the Natural Resources Defense Council have yet to weigh in on the project. Dylan Gasperik, spokesman for the NRDC’s Santa Monica office, said his organization has not yet evaluated the project.

Oil industry consultant Hackett said that he expects environmental opposition will delay, but not derail, the project.

“Sure, I think delays from environmental opposition will be inevitable, as with any big project in the state,” he said. “But with the overall emissions promised to go down, I can’t see the opposition ultimately having much impact.”