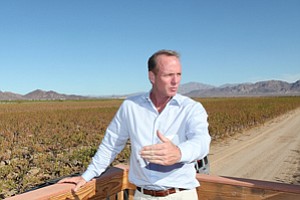 Investors in Cadiz Inc. were pumped up last week after a court ruling cleared a big roadblock for the L.A. company’s controversial plan to draw water from its remote desert property.

An Orange County judge May 2 upheld approvals for the water plan, dismissing challenges from an array of conservation groups and a mining company.

The ruling from Superior Court Judge Gail Andler moves Cadiz a big step closer to construction of its water-pumping plants and a pipeline to transfer millions of gallons of water from its desert aquifer to thirsty residents and businesses. That means the Cadiz project is closer to reality than it has ever been since its conception more than 20 years ago.

As a result of the ruling, investors sent Cadiz shares soaring. The stock closed at $8.03 on May 7, up 25 percent for the week and making Cadiz the biggest gainer on the LABJ Stock Index. (See page 82.)

The battle isn’t over, though. Opponents said last week that they plan to appeal the ruling. And Cadiz still needs federal approval to build a 43-mile pipeline alongside a rail line from the aquifer to the Colorado Aqueduct.

“We hope this ruling clears any doubts about the soundness of the project’s environmental commitment and our commitment to providing a safe and sustainable water supply throughout the region without causing environmental harm,” Cadiz Chief Executive Scott Slater told the Business Journal.

When the project was proposed in the early 1990s, it called for the Metropolitan Water District, a huge regional water wholesaler, to pay Cadiz up to $1 billion over 50 years to store up to 1.5 million acre-feet of water a year in the aquifer and then draw on that as needed. (An acre-foot of water is 326,000 gallons, enough to supply a household of four for a year).

Environmentalists argued the project would drain the desert aquifer and harm local wildlife. They persuaded Democratic Sen. Dianne Feinstein to oppose the plan; her opposition was a key factor in the MWD board’s decision to reject the plan in 2002.

The L.A. company resurrected the project in 2009 in a smaller form. Cadiz now plans to pump Colorado River water into the aquifer, where it will mix with natural groundwater. The aquifer is under its 45,000-acre holdings in the Cadiz Valley east of the Twentynine Palms Marine Corps Air Station. The company will pump it out as needed and sell it to water agencies, mostly in Southern California. The company will transport the water to the agencies via the aqueduct and another pipeline.

Under the smaller proposal, the company can store up to 1 million acre-feet of excess Colorado River water in the aquifer at any given time. Cadiz could draw out all that water and no more than 50,000 acre-feet of the naturally occurring groundwater in any given year.

After the Santa Margarita Water District and the County of San Bernardino approved Cadiz’s environmental impact report two years ago, several environmental groups filed suit challenging the project, led by the Center for Biological Diversity, a Tucson, Ariz. non-profit. Tetra Technologies Inc., a resources company in Woodlands, Texas, that has mining operations near the Cadiz Valley, also filed suit. Six separate lawsuits were filed; they were all heard in Andler’s court. This month’s ruling upholding the environmental approvals applied to all six lawsuits.

But the battle isn’t over.

Last week, Ileene Anderson, public lands deserts director for the Center for Biological Diversity said in an email statement to the Business Journal that the center plans to file an appeal, using the same arguments rejected by Andler.

Opponents contend that contrary to statements Cadiz has made in environmental documents, the project would drain the existing underground aquifer faster than it can be replenished. Besides harm to local wildlife, environmental opponents claim the project will result in dust storms and therefore more air pollution as the aquifer shrinks.

But Cadiz Chief Executive Slater said Andler’s ruling should put to rest any challenge to the environmental documents.

“Every allegation made by the Center for Biological Diversity and Tetra, including those about the procedures followed or the quality of the analysis, was denied,” he said.

But if an appeal is filed, a court could grant an injunction to halt the project until the case is heard.

Also, Cadiz still must get approval from the U.S. Bureau of Land Management for a pipeline the company plans to build near a rail line and which would connect with the Colorado River Aqueduct. The pipeline would cross BLM land.

Environmental groups have for months been pushing for the bureau to review the entire project. But Cadiz maintains all that’s needed is a routine approval because the pipeline would serve a need for the railroad to have a water supply in case rail cars derail and catch fire. The company has cited an 1875 law that states any auxiliary use of a railroad right-of-way is permitted so long as that use serves the railroad.

There is no time line for a BLM decision.

In the meantime, Cadiz continues to push ahead on an unusual proposal stemming from the pipeline: a plan to launch steam train service on the now rarely used rail line reported by the Business Journal last year. The steam train would be powered by water from the pipeline.

“There is continued interest in and demand for such an operation in the desert and we intend to incorporate our steam train plans into our water project design plans,” Salter said.