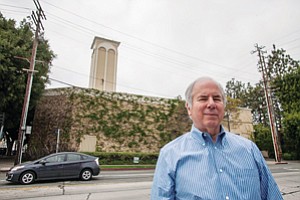 Pressured: BreitBurn Energy’s Greg Brown at one of the company’s L.A. oil wells that is covered to blend into the scenery. Photo by Ringo Chiu.

A proposed moratorium on fracking in Los Angeles would have more sweeping consequences, local oil companies say. In fact, if passed as proposed, they say it will shut down most oil production in the city – even at wells where fracking isn’t used.

The companies say the ordinance would also halt reinjecting water into the ground and using acid compounds to clean the wells, practices that have been used widely for decades. And they note that because the moratorium would stay in place until all of these practices are proven safe, hundreds of wells in the city would likely have to shut down for years, if not permanently.

One L.A. company that says it would be hit hard is BreitBurn Energy Partners, which has wells on Pico Boulevard just south of Beverly Hills, on the Veterans Affairs property in West Los Angeles and in Harbor Gateway.

“As currently written, this ordinance would shut down all our production in the city,” said Greg Brown, BreitBurn’s general counsel.

The ordinance was first introduced last year amid rising opposition to fracking, which is the high-pressure injection of water, sand and chemicals into wells to force oil out of underground formations. Environmental groups, local residents and community activists allege the process could contaminate local water supplies and have tried to link it to earthquakes.

The California Independent Producers Association, a Sacramento group representing small and midsize oil companies, has stepped up its opposition to the proposed moratorium. Chief Executive Rock Zierman said up to half of the city’s oil production would be halted immediately because of the prohibition on water reinjection and more wells would shut down over time because of the acid moratorium.

Zierman said the producers association and industry executives are meeting with city council members to convey the proposed ordinance’s sweeping impact on the industry.

“This motion was poorly conceived and its implications not understood,” he said.

If the final ordinance contains the same language as the motion, he said his organization will likely file a lawsuit, claiming that the ordinance represents an illegal regulatory taking under the Fifth Amendment of the Constitution.

BreitBurn is one of 26 oil companies that last year extracted more than 3.1 million barrels of oil from wells in the city, according to data from the state Division of Oil, Gas and Geothermal Resources.

The biggest single producer is Freeport-McMoRan Oil & Gas of Houston, which last year bought Plains Exploration and Production Co. and its extensive drilling operations in Baldwin Hills. The company accounts for one-third of the production in the city, with about 1 million barrels a year.

In written responses to questions from the Business Journal, the motion’s two authors, Councilmen Mike Bonin and Paul Koretz, said the oil industry is exaggerating the impact of this ordinance in an attempt to quash it. They said the motion is specifically aimed at fracking and other “unconventional” drilling techniques.

“The oil and gas industry has sought to obfuscate, mislead and scare people as a bizarre strategy for opposing a very simple and straight-forward safety measure,” Bonin and Koretz said in their joint written response.

The measure ordering City Attorney Mike Feuer to draft an ordinance passed the council Feb. 28 with little debate. A public hearing and final vote are expected in the next few months.

Oil companies are taking issue with two aspects of the proposed ordinance: The inclusion of both “waste disposal injection wells” and “acidizing” techniques in the moratorium and the stipulation that these activities are banned until the city is assured that they pose no threat to water supplies or people, and no risk of ground shifting or causing earthquakes.

Waste disposal injection wells pump water back into the ground after it has come out with the oil and separated. It’s a technique used at most wells – even when there is no fracking – in part to keep the ground from subsiding. If the practice is halted in Los Angeles, even temporarily, companies would have to truck the water to other well sites that connect to local sewer systems because it’s illegal for oil well operators to discharge water into the city sewer system.

Local oil company executives say that’s not feasible, either in practical or financial terms. They say their only real option is to shut down the wells.

“No question, if this is the way the ordinance is ultimately written, we will have to shut down some of our wells,” said Jeff Cooper, vice president and co-owner of Cooper & Brain, a small oil company in Wilmington.

Most of Cooper & Brain’s 23 wells in Los Angeles happen to be hooked up to the county sewer system. Still, Cooper said six or seven of its wells do not have such access and would have to be closed.

“That still would be a huge hit for us,” he said. “We’ve put a lot of investment into those wells and shutting them down would mean we would lose that investment.”

Cooper said he was also concerned about the moratorium on acidization. Along with other oil company executives, he believes this includes the use of acid compounds to clean scaly deposits off of oil well walls.

“Acid compounds are the most effective treatment; if we can’t use them, the oil wells will eventually clog up and become nonproductive,” he said. “That would threaten all our remaining wells in the city.”

Last year, the company’s wells in Los Angeles generated about $6 million in oil sales; Cooper said that represented more than half of the company’s revenue.

Bonin and Koretz said they only intend to target acid used to loosen rock formations to allow oil to flow more freely. They said acid used to treat oil well walls would be exempt.

However, industry executives point out the proposed ordinance as described in the motion makes no such distinction. And the oil companies say the moratorium is a de facto ban, since they believe there will never be sufficient proof to satisfy the environmental activists who successfully pushed the council to approve the moratorium.

“Look, New York state passed a similar moratorium,” Zierman said. “Every time a study is about to come forward detailing the actual positive safety record of unconventional drilling techniques, the environmental groups protest and the study is pulled back. That moratorium has been in effect for five years and looks like it will be in effect for at least another five years. It’s becoming a permanent ban and the same thing will happen here.”