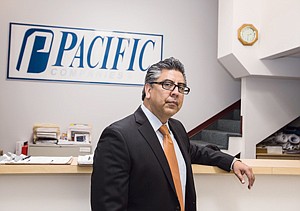 Local business owners and statewide business organizations are stepping up opposition to a state bill that would allow workers to file liens against their employers over claims of unpaid wages.

The labor-backed bill targets scofflaw businesses that fail to pay their workers wages and benefits they are owed and was designed to give workers another tool to collect on their money.

But business owners say the bill does not require that workers prove their claims before filing a lien and so could expose them to waves of frivolous or fraudulent liens.

“The threat of liens would become a weapon for plaintiffs’ attorneys and serial filers to extract money,” said Joe Ramirez, chief executive of Pacific National Security Inc., a Culver City company that provides security guards and systems to its clients. “If my properties do get tied up with liens, banks are much less likely to lend the capital I need to operate or grow my business.”

Ramirez is one of several business owners who, along with more than 60 business groups, are opposing the bill. The California Chamber of Commerce has labeled the bill a “job killer.”

The bill, AB 2416, by Assemblyman Mark Stone, D-Scotts Valley, passed the Assembly earlier this year and is due to be considered this week by the Senate Appropriations Committee. The committee can pass it on to the full Senate floor, vote it down or decide not to consider it.

In addition to the chamber, opponents include the California Manufacturers and Technology Association and the state chapter of the National Federation of Independent Business.

Support for the bill, AB 2416, comes from labor groups. They contend that workers in a wide array of low-wage industries – such as garment manufacturing, restaurants and janitorial service – have been unable to collect on legal or administrative judgments against their employers for failure to pay proper wages and benefits. The bill follows a study conducted by the National Employment Law Project in New York last year that said 83 percent of wage and hour judgments in California are never collected because the employers went out of business, moved or changed their names.

“We’ve tried increasing penalties on employers, but all that does is provide further encouragement for scofflaw employers to go out of business or otherwise evade detection,” said Tia Koonse, legal and policy research manager for the UCLA Labor Center in Los Angeles, which provides information and other assistance to low-wage workers. Koonse was a co-author of the wage theft collection study.

Under the bill, a worker or an agent for that worker – including a plaintiff’s attorney – can file a lien against the employer’s business or personal property for the amount they claim they are owed in unpaid wages and benefits. The wage and hour claim underlying the lien must then be brought to the state Labor Commissioner’s Office or a court within 90 days or the lien is automatically terminated.

If the claim is not proved, the lien is dismissed. Or the lien could be dismissed when any back wages are paid.

Proponents say a similar system exists in California for mechanics’ liens filed against construction contractors and has vastly improved worker collection rates for unpaid work. They also point to a broad lien program in Wisconsin that has boosted the collection rate to 90 percent.

But business opponents say this bill has got things backwards and that liens should only be allowed once a claim for unpaid wages or benefits is proven in front of the state labor commissioner or in court.

“It’s essentially saying you start out guilty and your property will be placed on hold until proven innocent,” said Mohammad Bahmani, a Downey businessman who owns a gas station and other business properties.

Bahmani said he believes the bill would create the same kind of abuse that arose from the Americans With Disabilities Act, with professional plaintiffs and their attorneys filing false actions in order to get paid off to drop a complaint.

He said if this bill passes, he believes it would only be a matter of time before a lien would be filed against his properties. That’s why he may move out of state; he recently bought a multifamily property in Atlanta.

“If this bill passes, I’m seriously considering selling everything here and moving there,” he said.

Another local business executive said he, too, fears that liens would be filed against his business property, despite what he termed as extraordinarily good relations with his employees.

Proponents say these fears have been blown out of proportion. They say the bill contains multiple layers of protection to prevent the filing of fraudulent or frivolous liens.

“Honest businesses are protected in this bill,” said Christopher Calhoun, spokesman for SEIU California, one of the sponsors of the bill.

Specifically, Calhoun said businesses can avoid a lien by posting a sufficient bond and that businesses must be notified in advance of a lien to give them a chance to fix honest payroll mistakes. Also, the bill allows expedited hearings before the labor commissioner to resolve wage and hour disputes.

Most importantly, proponents say, the measure should help level the playing field for all businesses by reducing the number of scofflaw businesses that don’t pay proper wages and benefits, and don’t obey other labor laws such as providing workers’ compensation coverage.

“I support this measure because it ensures that law-breaking companies are held responsible for paying the wages they owe their workers,” Rodney Sprague, president of King Janitorial Equipment Services, said in a June letter to the state Senate Labor and Industrial Relations Committee, which then passed the bill. Sprague’s company is headquartered in Garden Grove and many of its clients are commercial property owners in Los Angeles County.

“This legislation will help level the playing field for those of us who pay legally required wages,” Sprague said. “Unscrupulous companies will no longer be able to compete fairly without any consequence.”

But opponents say this benefit is outweighed by the potential harm the measure could do to legitimate companies that get hit with liens from questionable claims.

“Any time you make it easier to file a claim or a lien without proof, it will of course encourage more frivolous claims,” said Ken DeVore, lobbyist with the California chapter of the National Federation of Independent Business. “It’s just one more thing that California will have that makes it more difficult for businesses to operate here.”