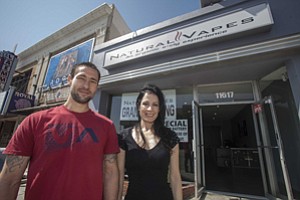 Elaine Ruggieri and Chris Strawn, owners of electronic cigarette store Natural Vapes in West Los Angeles, are casting a wary eye toward City Hall, concerned that they could be snuffed out by regulation.

Strawn, 29, became a convert after he started using e-cigarettes – battery-powered dispensers that turn a nicotine-infused liquid into vapor. He said they helped him shake off his three-pack-a-day habit.

The couple sensed a business opportunity selling e-cigarettes to others looking to kick their addiction and opened shop in July, contributing to the explosion of e-cigarette or “vape” stores.

But earlier this month, the Los Angeles City Council ordered the City Attorney’s Office to come up with an ordinance to regulate e-cigarettes as tobacco products, which would ban sales to minors and impose other restrictions.

“If that happens here, we’ll definitely fight back,” said Ruggieri, 41.

Since the beginning of the year, dozens of stores have opened throughout Los Angeles County, with dozens more planned.

“There are several new stores opening each month,” said Mark Burton, an attorney and former cigarette smoker who took up e-cigarettes a year ago after a heart attack. He has since become a consultant to the burgeoning industry.

“When I first started looking for electronic cigarettes in July 2012, I did a quick Google search and found only one store within a 20-mile radius of my house,” Burton said. “Now, there are dozens of stores, and that’s only on L.A.’s Westside and in the western San Fernando Valley. There must be dozens more stretching down to Long Beach and out east through the San Gabriel Valley.”

A search on consumer website Yelp turned up 165 stores across the county, from Chatsworth to Lomita, selling e-cigarettes. Most are dedicated vape shops but some are tobacco shops that also sell e-cigarettes and related paraphernalia.

And it’s not just e-cigarette converts rushing to open new stores. Local companies are quickly forming to make the liquids – known as e-juices – that are then infused with nicotine and turned into vapor. Already, hundreds of flavors are available online. Burton said some of those companies are opening up vape storefronts.

Electronic cigarettes were introduced into the United States from China in 2007. At that time, the e-cigarette dispensers were made to look like regular cigarettes; those models could be used for a day or two and generally cost about $20.

Today’s models include disposable and rechargeable e-cigarettes. Disposable e-cigarettes start at the most basic for $9; “disposable hookahs” that deliver 600 puffs cost in the $20 to $30 range. The more expensive rechargeable models called “personal vaporizers” cost from $50 or so to almost $300 for the top of the line.

According to industry publication Vape News, U.S. e-cigarette sales were a mere $20 million in 2008; that figure grew to more than $500 million last year. The magazine projects sales will top $1 billion nationally this year.

Advocates see e-cigarettes as a healthier alternative to tobacco cigarettes because the smoker controls the dose of nicotine. They can even be used to help kick the nicotine habit, which is what Strawn at Natural Vapes did by reducing the nicotine content little by little. Also, they don’t have additives such as tar.

Caught completely off-guard several years ago by the rapid spread of medical marijuana dispensaries and the years of litigation that followed, city officials are moving quickly to try to get a handle on the e-cigarette situation. Several cities have either imposed or are considering temporary halts on opening vape stores; others, including Los Angeles, are moving to regulate them.

City officials cite health concerns of the nicotine-laced liquids and they are especially concerned that teens are attracted by the huge variety of flavors available.

The Centers for Disease Control and Prevention notes that the percentage of high school students who say they’ve used e-cigarettes doubled between 2011 and 2012 to 10 percent.

To date, the federal Food and Drug Administration has not moved to regulate e-cigarettes, though the agency is studying the issue.

Earlier this summer, officials in Pico Rivera proposed a moratorium on new stores.

“We wanted a moratorium because in just six weeks, we had five permit applications come in for electronic cigarette stores and we didn’t even know what e-cigarettes were, much less how to treat them,” said Julia Gonzalez, deputy director for economic development.

But after several e-cigarette activists turned up in City Council chambers, the city backed off and instead passed a measure banning the use of e-cigarettes in public places.

“Our main message we like our members to send to city councils: When you prohibit an e-cigarette store, you deny people the option to switch to a product much less hazardous than cigarettes,” said Gregory Conley, legislative director of Consumer Advocates for Smoke-free Alternatives Association, an e-cigarette advocacy group headquartered in Springfield, Va.

“Many people don’t set out to switch to e-cigarettes,” he said. “Instead, they see an e-cigarette store, try the products and then decide to stop smoking and use e-cigarettes. That’s why the stores are so important.”

Last month, Seal Beach adopted a moratorium over the objections of e-cigarette activists. City officials said they wanted more time to look at the health impacts of e-cigarettes. A hearing on the issue is set for this week.

The city of L.A. measure, introduced earlier this month by Councilman Paul Koretz, would mean e-cigarette sales would fall under the same rules as tobacco. That means a ban on sales to minors; no stores within 1,000 feet of schools, parks with playgrounds or other “child-sensitive” land uses; and no unlocked displays within reach of customers.

Koretz also said he would like to see a moratorium on the opening of e-cigarette stores; such a proposal could emerge in coming weeks.

“We want to make getting e-cigarettes as difficult as possible,” Koretz said on KCRW’s “Which Way, L.A.?” program Sept. 19.

Store owners say they wouldn’t object to the same rules that apply to tobacco sales, but would fight added regulation.

“We card people who enter our stores and have absolutely no problem with a ban on sales of e-cigs to minors,” said John “JJ” Jenkins, who owns Vapor Spot Bar stores in Westwood and Sherman Oaks, and is close to opening a third store in Hollywood. “But we would be against any sort of moratorium on stores.”

Jenkins, whose Westwood shop was one of the first e-cigarette stores in the nation when it opened three years ago, said the industry will counter any moratorium attempts with its studies showing that smokers who switch to e-cigarettes reduce their risk of disease.

“There’s no science driving this, just an emotional reaction,” he said of the opposition.

Ruggieri said she would fight any moves to restrict the e-juice flavors. If such an attempt were made, she would argue that the city should also ban juice bars and juice-flavored alcoholic beverages.

“If flavored juices are OK in those places, they should be allowed in ours,” she said.

Burton, the e-cigarette consultant, said he expects another line to be drawn over attempts to ban the use of e-cigarettes within the vape stores; many cities ban using tobacco products inside smoke shops.

“The whole point is to try out different flavors and see which ones you like best before you buy them,” he said. “Take that away and it would have a serious impact on the market.”