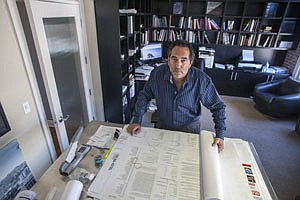 Developers and business groups are mounting furious opposition to a call for huge “congestion fees” to pay for L.A. transit projects.

The fees would apply to all new and adaptive reuse projects in Los Angeles County. Opponents characterize the costs as exorbitant and say they would discourage development in the county.

The Los Angeles Metropolitan Transportation Authority was set to vote on the fees at its board meeting this week. But opposition from dozens of local business groups and developers forced the agency to postpone consideration for at least two months. More than 50 business organizations and individual companies signed a letter that was sent last week to Metro officials urging the agency to drop consideration of the plan.

Among the local developers who signed on: Wayne Ratkovich of Ratkovich Co., an L.A. commercial building developer, and Edward Roski Jr., chief executive of Majestic Realty Co., an industrial developer in the City of Industry.

Opponents say the fees are not necessary and, even if they were, they are too high.

“We’re greatly concerned about this,” said Tracy Rafter, chief executive of the Los Angeles County Business Federation, or BizFed, which led the opposition. “This will slow the return on development, scuttling financing for many projects. For those projects that do get built, the fees will be passed on to the end users, making it more expensive to live and do business in Los Angeles County.”

New hotels and retail centers would be particularly hard hit by the fees, which are calculated on a formula based on the average number of daily vehicle trips generated by each kind of project. For a hotel, the minimum fee would be $2,464 a room.

“Given the size of the fees that are being discussed, it could affect our decision on whether to proceed with a project,” said Richard Heyman, owner of Five Chairs Development in Hollywood. The company is currently planning a 148-room Dream Hotel in Hollywood; that project likely would be grandfathered in and not have to pay the fee.

“Since the market crashed, developers now have to bring far more equity to hotel projects to get financing – upwards of 50 percent compared to maybe 20 percent before,” he said. The fee would make it harder because developers would have to come up with more money upfront.

He added: “This would only add to the fee burden the developer already faces, what with sewer hookup fees, building permit fees and the like.”

The threat to future hotel development is the main reason why the Los Angeles Hotel Association signed the coalition letter.

“The fees are so astronomical that it’s staggering to believe that the transit agency would even consider such irresponsible legislation,” said hotel association President Bob Amano. “If the congestion mitigation fees are put into effect as currently drafted, there will not be a single new hotel development happening in L.A. County.”

The fees are determined by a formula based on the number of car trips assumed for each type of land use. As a result, a retail center would have a much higher fee per square foot ($2.91) than a warehouse (30 cents). (See chart.) So a small store of 10,000 square feet, about the size of a typical Trader Joe’s, would have a fee of $29,000.

The one-time fees would be payable when developers pull their building permits.

If the MTA approves the fees, the county’s 88 cities would have two years to adopt their own versions, but the fees would have be at least as much as the MTA’s and they could go as much as five times higher.

Metro officials say the fees are required under a 1990 state law. Passed in conjunction with Proposition 111, a gas tax measure. The law states that if a region or city fails to reduce the number of streets and highways operating at the most congested level, then that city or region must enact a congestion mitigation fee or lose Proposition 111 gas tax dollars. In the last 20 years, congestion on many L.A.-area streets has only gotten worse.

Over the last decade, 22 cities in the county have enacted their own congestion mitigation fees. They include Burbank, Calabasas, Santa Monica and West Hollywood. The fee proposal from Metro has been in the works for nearly 10 years, even as the agency has added mass-transit lines and worked on transit-oriented development.

“We’re complying with the state mandate,” said Brad McAllester, Metro’s executive officer for long-range planning. “All of the things we’ve done … have not gotten us to improved levels of congestion. As a result, this congestion mitigation fee is now required. If business and development groups have an issue with this requirement, then they have to change the state law.”

BizFed’s Rafter said her group is considering asking some state legislators to take that route.

“No question that 1990 law is very outdated,” she said. “We’ve enacted so many programs since then to improve congestion and we believe they are more effective than this fee that’s being proposed.”

The biggest of those programs is Measure R, a half-cent sales tax increase that county voters passed in 2008. It’s expected to raise an estimated $40 billion over 30 years and those funds are already being used for local transportation projects.

However, as a sales tax, Measure R’s costs are borne by all residents and visitors who buy goods in the county. The fees Metro is considering would be paid primarily by developers.

An executive with the county’s main organization representing developers said her group does not have a problem with the concept of congestion mitigation fees and has even supported fees in some of the cities that have adopted them. But Holly Schroeder, chief executive of the Building Industry Association of Los Angeles and Ventura Counties, said that her organization opposes Metro’s fee as crafted.

“Part of the problem is the list of transportation projects that this money would go towards,” Schroeder said, “things like bike lanes that take away a lane of traffic and make congestion worse. Why should developers have to pay such steep fees for projects that won’t be effective in actually reducing congestion?”

Metro’s McAllester said that all the transportation projects on the list would improve the ability of people to get around on local streets and highways.

“Look, I know people have raised objections to bike lanes,” he said. “But if you have good bike lanes that convince people to get out of their cars and ride their bikes, that reduces the number of cars on the road, which in turn reduces congestion.”

He said the projects that will get money from the fee would reduce the time vehicles spend in congestion by a cumulative 25 million hours over 20 years.

McAllester disputed claims that the fees were too high. He said the $1,900 minimum fee on a home would be factored into the cost of a mortgage.

“It comes out to something like six extra dollars a month for a homeowner to be able to move about more easily in their vehicles,” he said.

But developers say the congestion mitigation fee is yet another burden that local developers and businesses must bear and comes at a time when financing for projects remains shaky.

One urban multifamily developer said enacting this fee would further discourage affordable housing projects, which recently sustained the loss of redevelopment funds. By their very nature, projects that meet government affordability standards typically need subsidies because they don’t pencil out on their own.

Bill Witte, president of Related California, a division of the Related Cos. of New York, which is developing the Grand Avenue project in downtown Los Angeles, said he was concerned the fee would make affordable housing even more difficult to provide.

“Adding this for affordable housing, particularly on the heels of the end of redevelopment funding, would be a genuinely bad idea,” he said.