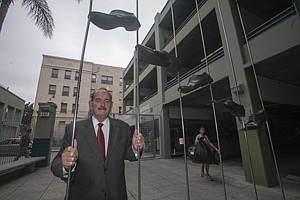 In L.A.’s latest effort to privatize city services, $39 million in contracts are about to be offered to three companies to operate two dozen city-owned parking facilities. It’s a move that could save the city $3 million in personnel costs.

But because the change was delayed by more than a year, one parking operator that stands to lose its contracts to manage seven of the parking structures is crying foul.

City transportation officials have recommended taking those contracts from Parking Concepts Inc. of Irvine and handing them to Modern Parking Inc. of Los Angeles. The contracts are worth more than $10 million over five years and more than $25 million if extended to eight years.

But Parking Concepts wants the contracts rebid because the landscape has changed since the original bids were submitted almost two years ago.

“The bid submission was approximately 20 months ago and we believe that the city is taking a considerable amount of unnecessary risk to proceed with awarding a contract or contracts based on such outdated historical information,” said Robert Hindle, vice president of Parking Concepts and president of the Los Angeles Parking Association. “When six months and then a year went by without hearing anything, we figured the city would send out a new request for proposals, which is what they should do now.”

A city administrator said a number of complex issues had to be examined before the contract proposal could move forward.

The contract awards are pending before the council’s Transportation Committee. They could come before the full council later this month.

City Council had ordered city transportation officials to call for the bids in 2011 after rejecting a plan from then-Mayor Antonio Villaraigosa to lease out the parking structures for $53 million in upfront cash to help plug a $200 million general fund deficit. That plan ran into opposition from merchants and other groups concerned that a private operator would raise parking rates, as first reported in the Business Journal in January 2011.

Supporters of the effort to contract out operation of the parking facilities said it would save the city money and allow private operators to install technological upgrades the city hasn’t been able to, such as mobile phone apps for advance parking reservations and tracking space availability.

“Ideally, the city would have gotten out of the parking business entirely, since that is not a core government function,” said Leonard Gilroy, director of government reform with West L.A.’s Reason Foundation, which advocates for privatization of government services. “But since that course was rejected, these agreements would bring some significant benefits, including lowering operating costs and the deployment of parking apps and other technologies that improve the customer experience and ease of use.”

Parking Concepts’ Hindle said the contracts that private operators now have with the city leave little room for investments in technology.

“The city lots are way behind the times,” he said.

A report issued last month by City Administrative Officer Miguel Santana said the five-year contracts totaling $39 million could save the city $3 million in labor costs. An estimated 54 employees would lose their jobs at those facilities, though under union contracts, they cannot be laid off; instead, they must be transferred to vacant city positions that need to be filled.

Of the 24 lots owned by the city, 16 are run by the city’s Department of General Services. The other eight are already contracted out, seven to Parking Concepts. The lot at the Hollywood & Highland Center is run by a joint venture of Standard Parking Corp.’s Central Parking System and Global Parking Systems.

The report also recommended giving the City Council an option to extend the contracts for three more years – to eight years total – at an additional cost of $40 million.

Transportation officials scored all the bids and recommended that Ampco Parking, a unit of ABM Industries Inc. of New York, operate 14 facilities run by the city in the San Fernando Valley and Mid-Wilshire-downtown. An additional nine facilities – including seven in Venice and Hollywood now operated by Parking Concepts – would go to Modern Parking.

And the parking garage at Hollywood & Highland – by far the largest of the 24 facilities, with 3,021 spaces (nearly 40 percent of the total spaces in all 24 lots) – would go to SP Plus Municipal Services, like Central Parking a unit of Chicago’s Standard Parking.

In Parking Concepts’ case, transportation officials consistently scored the firm in the middle or toward the lower end among the bidders; the company scored particularly low in the “parking operations and marketing plan” criterion. Modern Parking scored considerably higher, receiving the top rankings for the lots in Venice and Hollywood.

But Hindle believes the outcome might have been different had the bidding been held this year. He said circumstances have changed considerably since the original bidding, and not just with technology: Mergers and acquisitions in the bidding companies have scrambled some of the players.

For example, when the bids were submitted the joint venture that operates the Hollywood & Highland garage submitted one bid. SP Plus Municipal Services, another unit of Standard Parking, submitted a completely separate bid for that garage. But last year, Standard Parking bought Central Parking, which means that Standard Parking is now part of both bids, something that would likely not be permissible now.

A city administrator said complications caused the delay. One was the stipulation in the Service Employees International Union’s contract with the city. The contract stated that any city employees whose jobs are moved to the private sector must be placed in another job with the city.

“In order to do our cost-benefit analysis, we had to see what job classifications were affected and whether vacant positions would be available for the affected employees,” said Patty Huber, assistant city administrative officer.

Also, Huber said the Hollywood & Highland garage still has to pay off $58 million in construction bond debt. To keep tax-exempt status, contracts with the private sector must adhere to Internal Revenue Service codes.

“We had a lot of back and forth with our bond counsel on that one,” she said.