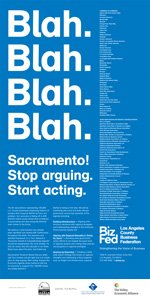 The Business Federation, or BizFed, spent tens of thousands of dollars to place ads in the six regional papers owned by William Dean Singleton’s Los Angeles Newspaper Group admonishing the legislators to “stop arguing” and pass laws that create jobs.

But the ads, which began running Jan. 8 and are scheduled for publication on successive Sundays through the end of the month, may have a subtext: pressuring L.A.’s mostly Democratic lawmakers to stop passing anti-business legislation.

“This effort is designed more to stop Democrats from ramming through pro-union measures than it is to end the gridlock,” said Robert Stern, former president of the now-shuttered Center for Governmental Studies, who follows business lobbying and state government issues.

For BizFed, the ad campaign is a milestone: its first foray into political advertising. The organization, founded four years ago as a counterweight to the influence of unions in L.A. politics, has grown to 94 member business associations representing 165,000 businesses.

“It took us a while to get started,” said BizFed founder David Fleming, a San Fernando Valley attorney who previously served as chairman of the Los Angeles Area Chamber of Commerce. “Now that we have some clout, it’s time to step up and start doing something.”

Fleming said the ad campaign represents a “primal scream” from the business community.

“Our legislators just aren’t getting it,” he said. “We have to lessen the burden on business, especially small businesses. But instead, our legislators keep arguing and fighting amongst themselves while the ship is sinking.”

Fleming is one of four of the ad campaign’s “featured sponsors,” each of whom contributed several thousand dollars to the effort. The other three: the Apartment Association of Greater Los Angeles, the Southland Regional Association of Realtors and the Valley Economic Alliance.

“BizFed believes this is a starting framework for every elected official, business and labor leader in this state to work collaboratively to move us forward,” said Tracy Rafter, BizFed chief executive and the former publisher of the Los Angeles Daily News, one of the Los Angeles Newspaper Group papers.

“We have to start saving redevelopment agencies,” he said. “They are a proven jobs producer. At the very least, we have to keep them going until an effective replacement can be crafted.”

He also said the ad campaign is the first step in pressuring lawmakers to be more business friendly. Sometime late this summer, BizFed will publish its first ever report card on the county’s state lawmakers, grading each on the degree of their commitment to job creation.

Eventually, he said, BizFed will “back pro-business candidates, regardless of party.”

BizFed has already established a political action committee for this purpose, but Fleming said it will only be effective with coordination among the PACs of its member associations.

Stern said BizFed’s voice may be especially important in this year’s campaigns because of the new open primary system. The system places the two leading candidates in a runoff election, so Democratic candidates will have to reach out to independents and possibly even business leaders if they want to come out on top.

“These ads could be very effective in encouraging Democratic legislators to be more business friendly,” he said.