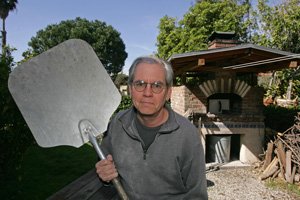 Stambler holds his baking peel in front of the oven in his Los Feliz back yard, where he bakes artisan bread. Photo by Ringo Chiu.

When Los Feliz resident Mark Stambler won some awards at county fairs for his home-baked artisan breads a few years ago, he thought he might start selling them to local restaurants and stores.

So he did. Stambler’s breads – French, wheat and rye – soon became a hit with customers who bought them at nearby gourmet shops.

But in June, Los Angeles County health inspectors swooped down on the Silver Lake and Echo Park stores that were selling Stambler’s breads, confiscated every loaf and told the store owners that they shouldn’t stock his products.

Stambler and the grocers had run afoul of arcane county laws banning the commercial sale of home-baked goods. He was surprised.

“I wanted to do this legally, baking my breads at home and sell them under my own name,” he said.

If it becomes law, AB 1616 would help home-based microentrepreneurs like Stambler and hundreds of others who make small amounts of food to sell at local stores, farmers markets and swap meets. Such a state law would trump county law, although counties could add conditions and requirements.

Stambler’s trouble began when his bread-making venture was featured in a newspaper profile. Inspectors showed up at the stores the next day.

He soon learned that the only way he could continue selling bread was to find a commercial bakery or food preparer where he could work as an employee and use their facilities.

Stambler, 58, was able to find a bakery, but by the time the county finally gave its approval to allow sales under his name, the kitchen was no longer available.

“By the time I got county permission, it turned out to be a pyrrhic victory,” he said.

Gatto told the Business Journal last week that the law governing Stambler’s home-baked goods was Byzantine and unclear. He didn’t want such a law to kill what could become a successful bakery.

“We should never be in a position of stifling a business before it starts,” he said. “If a business takes off, like Entenmann’s (brand of baked goods), that is wonderful. That’s what we want during these economic times.”

Gatto’s bill would allow the sale of home-baked foods classified as “low-risk” to public health, such as breads, dried fruits and pastries. The sale of other home-prepared foods that carry higher risk of food-borne infections, such as produce or poultry, would still be banned under county and state health codes.

For home-based food preparers who want to sell their products at local stores and farmers markets, county health codes and permit costs are major obstacles.

“The big barriers for these people are bureaucracy and the cost of permitting,” said Irene Peña, executive director of Proyecto Jardin, a community garden and sustainable food advocacy organization in Boyle Heights. “Basically, you have to own or rent a commercial kitchen, which is way out of reach for people who make only $100 or $200 on their products at a farmers market or community event.”

As a result, Pena said, many people who want to start home-based microbusinesses and sell their bread or other food products cannot do so legally and quickly give up on their dreams.

One such person is Magdalena Sanchez, a retired woman in Whittier who wants to make mole paste in her kitchen, and sell it to Mexican meat shops and stores. The paste is the main ingredient for Mexican mole sauce. Both the city of Whittier and the county health department told her she would have to prepare her product in a commercial kitchen. That would make the project too expensive, Sanchez said.

Sanchez planned to make batches of 200 pounds of mole paste in one day. After the cost of materials, she would make a profit of about $1.50 per pound, or $350 per batch. A commercial kitchen in Pasadena would rent her the facility for $250 a day. That would wipe out most of her profits.

“I can’t pay for the kitchen, it’s very expensive,” she said. “I wanted to make this a small business but I don’t have the money for an expense like that at this point.”

Sanchez said Gatto’s bill would help her set up a part-time business, which she intends as a supplement to her retirement income. Of course, if the mole paste business were to take off, she said she would transition to a full-fledged business with its own commercial kitchen.

The bill could face opposition from county health officials concerned about the difficulty and cost of inspecting home-based food preparers.

Last week, a spokesperson for the Los Angeles County Department of Public Health’s environmental health division refused Business Journal requests for comment, saying it was not department policy to comment on proposed legislation before the county Board of Supervisors takes a position on that legislation.

Gatto said he was prepared to enter discussions with county public health officials about accommodating any concerns. But, he did not want inspection fees to be set so high that they deter microentrepreneurs from launching their businesses.

Late last year, Stambler brought together several fellow home-based bread makers to form Los Angeles Bread Bakers to lobby for a change in the laws. He said that because only low-risk home-baked foods are allowed under the proposed law, the inspection costs should not run too high.

“It shouldn’t cost $500 or more for an inspection of a home-based kitchen,” Stambler said. “If it does, then many microentrepreneurs would simply give up.”

Gatto hopes the bill reaches the governor’s desk by the end of this legislative session in August.

If that happens, Stambler said he would resume trying to sell his bread in local stores and restaurants.

“Eventually I would like to transition into baking bread full time,” he said.